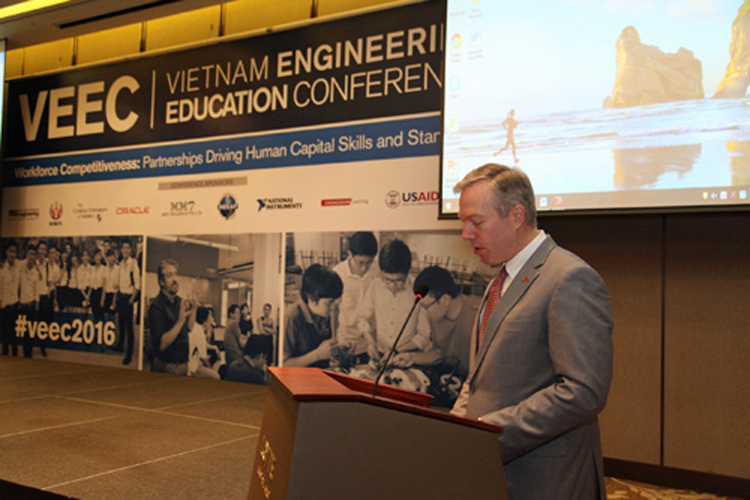 I’m often asked about the United States Government’s goal in Vietnam. It really boils down to one simple idea – the United States wants Vietnam to succeed. Vietnam is a critical country in a critical region and the United States needs strong partners here. The challenges we face as part of a globalized world cannot be solved by one nation acting alone. Climate change, Zika and drought do not recognize the border between Vietnam and Cambodia. Commerce, increasingly, also knows no borders. It is no longer enough for Ho Chi Minh City to be the most successful city in Vietnam, because it is competing with Manila and Jakarta. And now, as part of the Transpacific Partnership, Vietnam will increasingly be expected to keep up with the eleven other countries and 40% of the global economy comprising this agreement.

The key is innovation. Innovation means success, it means economic development. Innovation is what keeps an economy dynamic and drives it forward. So, if the American people’s goal is to help Vietnam succeed, we are well placed, because America has the most vibrant, innovative economy in the world. Why is that? It is because of a three pronged partnership between academia, the private sector, and the government. The linkages between these three partners form an environment – an ecosystem – that nurtures innovation.

First prong – the U.S. educational system encourages critical thinking, rewards creativity and prizes invention through extensive support for research. Second prong – the government supports research as well, but more importantly, it provides a legal framework to protect new ideas so that people can reap the rewards of their effort. And third prong – the private sector creates space for the best ideas to thrive competitively, and it, too, contributes significant support for research. In fact, in the United States, the private sector contributes 65% of spending on applied research. The result of the academic-government-private sector nexus is the creation of an environment that allows creativity and innovation to take root, and ultimately to power the economy. This system has helped to make—and to keep—America the world’s innovation leader.

I see the beginning of that here in Vietnam. One year ago at VEEC in Danang, there were two makerspaces in Vietnam – Fablab Saigon and our own American Center. Today, there are new makerspaces in Danang and Hanoi, and plans are in the works to develop others around the country. Several months ago I visited Fablab Danang – Hội ơi, bạn có mặt ở đây không? It was memorable. There were kids there – teens and pre-teens – using equipment they would never otherwise have had access to, encouraged by dedicated instructors and sharing ideas that quite clearly fueled their imagination. I still treasure the mini White House that Fablab Danang made for me on their 3D printer, not just because it is amazing, but also because it reminds me of the tremendous joy that those kids took that day in expressing their own creativity. They could not wait to show us their projects. It was inspiring.

So we can talk about legal frameworks and ecosystems and the Maker Movement, but really, when we get to the crux of the issue, we are talking about those kids. Now that they’ve had that experience – of practical exploration, of creativity, of building something that is theirs – they will never forget it. And they will never go back. They will look for their community to provide opportunities for them as they continue their education.

So that’s why I’m so proud to be here today. I am proud of the ways in which the United States is helping Vietnam to develop its innovation ecosystem. Through the HEEAP program, through ASU’s work in helping Vietnamese Universities become internationally accredited, through our own programs to develop a Vietnamese maker ecosystem that will provide hands-on, active learning opportunities in STEM fields, and to link U.S. academic institutions with their Vietnamese counterparts. And through our support of Fulbright University Vietnam, which will be the first private, not-for-profit University in Vietnam. I have full confidence that this University will become not just the best new university in Vietnam, but the best new university in the world.