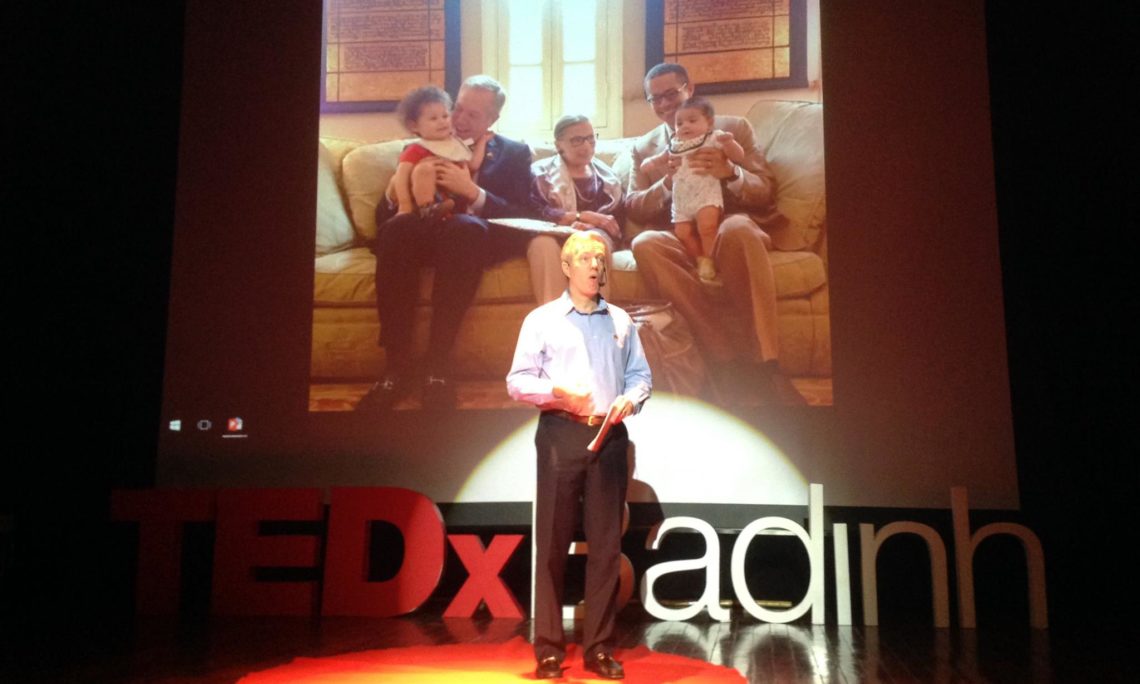 Ambassador Osius talks about ‘Love and Purpose’ at TEDxBaDinh.

TEDx BaDinh, April 24, 2016
Let me start with a simple idea: in life, it’s love and purpose that matter.
This photo [our family with Justice Ginsburg] shows that, every so often, love and purpose can align.
When Clayton and I asked Supreme Court Justice Ruth Bader Ginsburg to renew our marriage vows, to be honest, we were thinking first about purpose.
As the first openly gay U.S. ambassador in East Asia, I hoped to provide a bit of encouragement for Vietnam’s LGBTI community.
Clayton and I had on many occasions heard from gay people here that, when they saw us, they realized that careers and families might be possible for them, too.
So Justice Ginsburg’s visit, a few weeks after the Supreme Court decision enabling our union to be recognized in all fifty states, seemed like a chance to encourage others.
At a press conference in our home, Justice Ginsburg walked through the history of marriage equality that led up to the Supreme Court’s historic decision.
She said change began in the states, starting with Massachusetts, and then the Supreme Court heard a case involving a criminal law penalizing same sex relations.
The Supreme Court decided that was unconstitutional.
The next case to come to the Court involved the law of another state in which LGBT people could not be protected by anti-discrimination laws.
The Supreme Court declared that, too, was unconstitutional.
You cannot take one group of people and put them outside the protection of the law.
By the time the Court decided the Obergefell case, there were already small steps in the direction of marriage equality and a good number of states recognized it.
So the Supreme Court was taking not a large step but one further step in the direction that was begun at least ten years earlier.
Social change, the Justice argued, began at the state level and that’s what made it broadly acceptable.
She didn’t argue that Vietnam should follow the United States in making marriage equality the law of the land.
She said that social change leads to legal change.
As she spoke, Justice Ginsburg held in her hands a worn copy of the U.S. Constitution.
When she met with Vietnam’s Supreme Court justices about the changes taking place here, she held that same copy of the Constitution, and referred back to it several times.
She never said you should follow us, but rather this is what is done in the United States.
And she used examples of what decisions have been made in Singapore, and Romania, and Turkey, in order to strengthen the judicial system and the rule of law in those countries.
In every meeting, she showed respect for Vietnam’s decisions about how to shape its future.
American society is not perfect – and neither is Vietnam’s – but this very wise Justice suggested that, even so, our two societies might learn from each other.
In Vietnam, I have learned over twenty years, family means a great deal.
Family is celebrated during Tet, in your legends, in your songs and your poetry.
When Justice Ginsburg renewed our vows, we hoped to show that family was possible, too, for LGBTI people.
Our two children, a son and daughter, participated in our renewal of vows.
You see, when we took our vows the first time, ten years ago, they mattered mostly just to the two of us.
This time, those vows matter also for two small people who are like our hearts outside our bodies.
This time, when I placed a ring on Clayton’s finger and reaffirmed my commitment “to have and to hold….from this day forward through all our life together,” our 19-month-old son lunged from my arms into Clayton’s.
Perhaps because we love our children so fiercely, and because we know better now what marriage means, those words have only grown in significance.
Love and purpose came together for us that day: we declared our love for each other and for our family.
And we did so hoping to show that families are possible for all, even here in Vietnam.
We did so also with a sense of humility, because each society will find its own way.
In Hue once, I was asked by a young man whether I had encountered difficulties because I am gay.
I told him the truth: yes, I have, but by being who I am, I was able to create a family, and even to have a career that I love.
I love representing the United States in Vietnam.
I love Vietnam.
Now, in Vietnam, it may be harder than in the United States to be openly gay.
But I would still suggest that it’s better to be who you are than try to be someone else.
It’s better to see family, to see love, as possible not only for some people, but for everyone
It’s better to see that love and purpose can align.
Thank you.