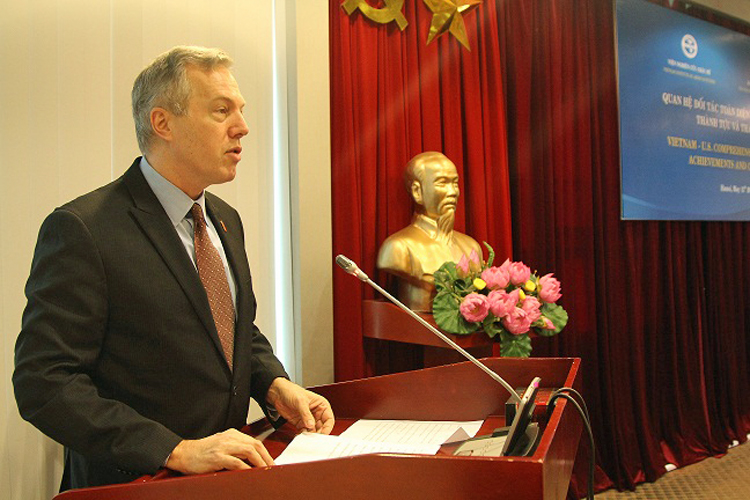 Co-hosted by the Vietnam Academy of Social Sciences and the U.S. Embassy Hanoi

Thank you to Vice President Duc for inviting me to speak with you today.

I would also like to recognize VASS for spearheading this important discussion.

Much credit goes to Dr. Cu Chi Loi for organizing a thoughtful agenda.

One last thanks belong to The Asia Foundation.

This discussion comes at a pivotal time in our bilateral relationship: in the wake of General Secretary Nguyen Phu Trong’s historic visit to the United States last year and in the run-up to President Obama’s first visit to Vietnam in ten days.

These visits in many ways are the culmination of how far we have come in so many areas over the past twenty years.

That success is due to diligence and hard work on both sides. We’re trying to address a painful past, to solidify present gains, and to ensure a bright future for both of our countries.

The topic of my remarks is “building trust:” I think we have done a lot of that in recent years. Today, I’d like to talk about two ways we build trust. One is by being honest about our differences and dealing with them through open, respectful discussion. Another is by working together toward a common goal.

I’ll start with one of the most difficult issues between us — the different approaches we have to safeguarding and promoting the rights of our citizens.

Since trust is based on understanding, I’d like to take a few minutes to talk about the American perspective on this question.

One important element of our history that formed our world view is the Civil Rights Movement.

In the 1950s and ‘60s, we finally recognized that ending segregation was a huge challenge, that it would provoke instability and disorder in our society, but that we could not call ourselves a democracy until we ended state-sanctioned discrimination against African-American citizens.

Many of the people who led the fight for civil rights were viewed in the United States at that time as trouble-makers and agitators.

In 1966, many Americans thought Dr. Martin Luther King was a communist, and an enemy of our American way of life.

Now, we erect statues to him and have a holiday in his honor. Our country is a better, stronger, more prosperous place because we did our best to overcome our fears and try to live up to the principles in our Constitution.

Because of our experience – going right back to our founding as a nation — we believe strongly that every human has a right to speak, to worship, to assemble, to dissent, to challenge, to protest, and to take part in the political and economic decisions that affect one’s life.

Indeed, exercising these freedoms peacefully is the highest form of patriotism, because it means you are willing to suffer jail or beatings in order to make your country a better place.

We recognize that every country has its own history, its own experience, different from ours.

As our Deputy Secretary of State, Antony Blinken, said in a speech here last month, every nation has to chart its own course to self-government.

No nation has found a perfect path, including the United States. We often find that the results of our efforts do not meet our own expectations and our own actions fall short of our ideals.

I believe this is a goal that both our countries share.

And so I have been impressed with many steps the Government of Vietnam has taken, starting with the 2013 Constitution, with its guarantees of key human rights and freedoms.

The government has also made clear commitments to synchronize domestic laws with international human rights obligations and with the new constitution.

The Government has ratified the Convention against Torture and the UN Convention on the Rights of Persons with Disabilities, and agreed to allow independent trade unions for the first time in modern history.

We also commend the Government’s efforts to consult with local religious and civil society stakeholders during the drafting of a new religion law.

We hope the final draft will protect the rights of all those who seek to freely exercise their faith.

In our experience, getting the fundamental legal framework right is a necessary first step to building a prosperous and democratic society that respects human rights and the rule of law.

But, it is only a first step. In the United States, during the 19th and early 20th centuries, our Constitution very clearly guaranteed African-Americans full rights as citizens.

But our practice did not live up to our promises.

For trying to claim those rights, Martin Luther King was jailed. John Lewis – now an esteemed member of Congress – was beaten by police.

Even today, we recognize that our actions fall short of our goals. The civil rights movement lit a spark, and great changes swept across the United States because of it, but we still have to work every day to live up the promises our Constitution made to our citizens. I expect it will be the same here.

So, when we raise these sensitive issues, when we call for the release of prisoners, for less government intervention in the activities of religious organizations, we do it with the full understanding that it is not easy to make these changes in society, that it can cause disruption and even social conflict, but we believe firmly that it is worth it, in the end.

As we work to build trust, I hope you will recognize that our positions on human rights, even if you disagree with them, come from deep in our hearts, because of the lessons our history has taught us.

Building trust requires us to be honest about our disagreements. But we also build trust when we work together toward a common goal.

Our two countries have grown closer in recent years because we share the goal of maintaining peace and stability in the region through adherence to international law.

As such, the United States has consistently called on China and on all nations to respect the Arbitral Tribunal decision on the Philippines-China case as legally binding, when it is issued; to demonstrate good faith by clarifying its maritime claims in accordance with international law; to uphold freedom of navigation; to commit to peacefully resolve differences, including through rules-based mechanisms, like arbitration and not through unilateral action; and to agree to engage in serious diplomacy and a diplomatic process to develop a shared understanding of how to behave in disputed areas.

These are all areas where the US and Vietnam share very similar views, and where we have both benefitted from our discussions together on this question.

In the meantime, the United States will defend our national interests and support our allies and partners in the region.

We are not looking for bases. But we do hope to encourage and support the efforts of the countries in the region to build up their Coast Guards, improve their maritime domain awareness, and generally be more capable of securing their maritime borders, preventing smuggling, illegal fishing, and other activities that threaten the environment.

We believe that working toward that common goal together has already strengthened the bonds of trust between us, and we look forward to continuing our efforts together.

I sincerely hope that today’s discussion deepens our understanding of the challenges that remain in our bilateral relationship and how we can resolve them. We have so much to gain by working together. Again, I thank VASS for welcoming me here today.