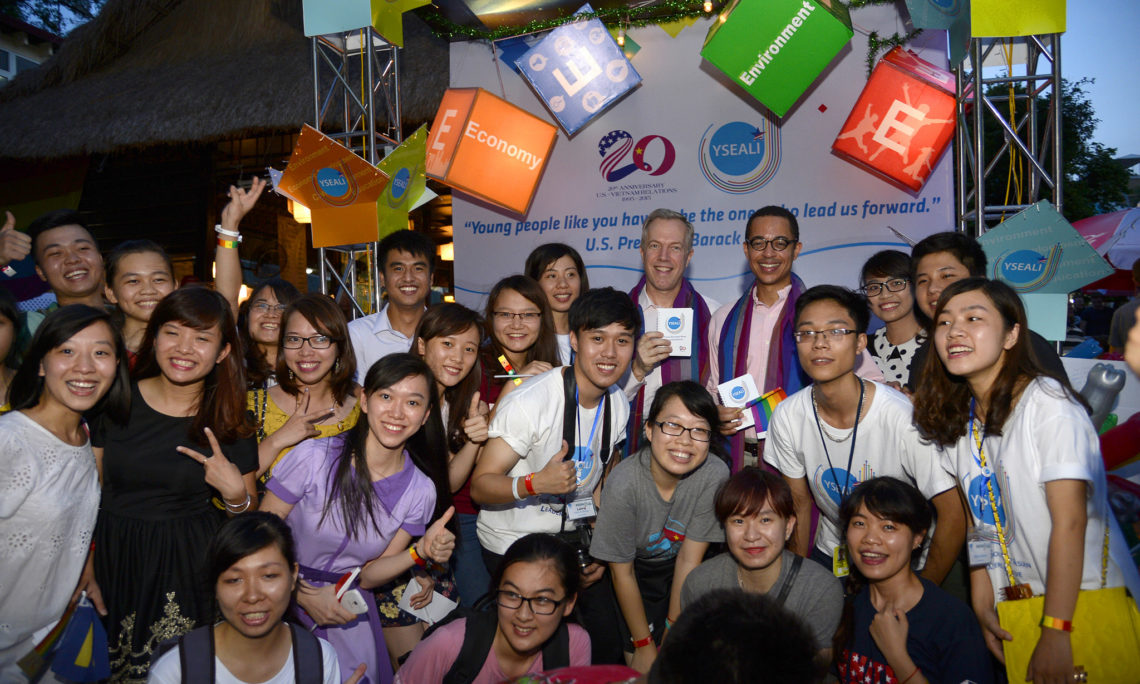 Ambassador Osius and his spouse with YSEALI youth at the ASEAN Pride Music Festival.

At an early public event after assuming the position of ambassador, I was asked the question. My audience numbered about a thousand students. Their school in Vietnam’s former Imperial capital of Hue specialized in teaching the gifted and talented, and counted among its graduates Ho Chi Minh and General Vo Nguyen Giap.

After a brief presentation, I offered to answer questions in Vietnamese or in English. The students asked their questions in flawless English, politely indicating that their mastery of a second language exceeded my own. Most questions were about education, or the bilateral relationship, or where they might turn to look for scholarships to study in the United States.

One young woman asked what advice I could give to an aspiring actress whose dreams for her future differ from those of her parents. Remembering that the students at that school face many expectations from family and teachers, I still told her she must plot her own path.

A teenager stood up, looked squarely at me, and asked if I had encountered difficulties in my life or career as a result of being gay.

I had faced this question once or twice, but never in front of such a large audience. If this young man had the courage to speak out in front of his peers, exposing himself to questions in the future, I thought he deserved an honest reply.

“When I first joined the Foreign Service, we could lose our jobs for being out,” I told him. “Because there is strength in numbers, we created a group, and we persuaded the State Department to stop discrimination based on sexual orientation. As American society grew more accepting, we insisted that our families be treated with the same respect as traditional families.”

“In India, at a high-level reception, an elegant sari-clad woman asked Clayton about his wife. He pointed toward me, saying I was his spouse. Her eyes widened, and then she replied, ‘You live your life.’”

“In another conservative society, the world’s biggest Muslim-majority nation, the Indonesian President hosted a state dinner for President and Mrs. Obama. Directed toward the front, Clayton and I looked for cards that would tell us where to sit, unsure of what the cards would read. We were pleasantly surprised to find: ‘Ted Osius, Deputy Chief of Mission,’ and next to it ‘Clayton Bond, spouse of the Deputy Chief of Mission.’

“Since we arrived in Vietnam, our family — a black man, a white man, and a son who is brown — we have received the warmest possible welcome. If I can draw a lesson from these experiences, it is that it is better to be who you are. I don’t think happiness is possible any other way. Be who you are.”

There was a moment of quiet. The young man who had asked the question smiled broadly. Then the applause began, and it lasted a long while.

I am proud to represent the United States as an ambassador. Each day I get to try and make friends for America. And I am especially proud to serve in Vietnam, a country, culture, and people that I love.

Each June, we celebrate Pride Month in the United States and overseas. As President Obama said, “let us celebrate how far we have come and reaffirm our steadfast belief in the equal dignity of all Americans.” I am happy to reaffirm President Obama’s message, because defending the equality of LGBTI persons is at the core of our commitment to advancing human rights globally — the heart and conscience of our diplomacy.