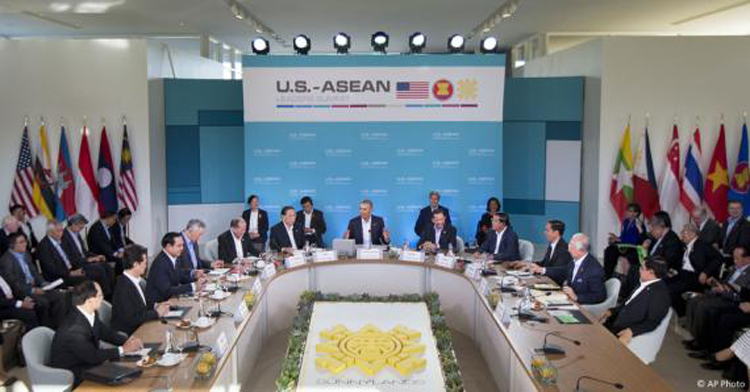 President Barack Obama, center, speaks at the plenary session meeting of ASEAN, the 10-nation Association of Southeast Asian Nations, at the Annenberg Retreat at Sunnylands in Rancho Mirage, California, on February 15, 2016.

Last week, I visited Laos to participate in the Association of Southeast Asian Nations (ASEAN) and East Asia Summit (EAS) Economic Ministers’ meetings. Both meetings are annual gatherings of the ten ASEAN states (Brunei, Cambodia, Indonesia, Laos, Malaysia, Myanmar, the Philippines, Singapore, Thailand, and Vietnam) and eight others, including the United States, to discuss plans for growth and development in a region that is the economic engine of the world: the Asia-Pacific. In addition to meeting with the Economic Ministers, I met with Lao officials, entrepeneurs, and U.S. businesses in Vientiane, the capital of Laos. The central theme across my engagements was how U.S.-ASEAN Connect (Connect), a new initiative announced by President Obama during the Special Leaders Summit in Sunnylands, California in February, can deepen ties and promote shared prosperity among the United States and ASEAN.

During our meeting with the ASEAN Economic Ministers, U.S. Ambassador to ASEAN Nina Hachigian and I explained the goals and outcomes of Connect to date. Connect is a unifying framework for U.S. public and private sector economic engagement in ASEAN that advances the region’s aspiration of forming an ASEAN Economic Community. It reflects the strategic importance that the United States places on a strong and integrated ASEAN that can serve as a bulwark for stability in Asia and yield even greater opportunities for two-way trade and investment.

Under each of Connect’s four pillars — Business, Energy, Innovation, and Policy — I described ongoing and new activities. For example, under the Innovation Connect pillar, I highlighted the American Innovation Roadshow series where senior officials from the State Department have traveled to Indonesia, Myanmar, the Philippines, and Vietnam with leading U.S. private sector representatives to engage governments and entrepeneurs. I also previewed a new initiative on digital economy that will deliver programs and events, which President Obama will formally announce in Laos next month at the ASEAN Leaders’ Summit. The reaction by the ASEAN Ministers was positive and resulted in a series of inquiries as to how their countries could forge particular partnerships and avail of certain programs under the Policy Connect pillar.

In a press conference that I held on the sidelines of the Economic Ministers’ Meeting, I expanded on the President’s upcoming historic visit to Laos –- the first by a U.S. President in the 61st year of diplomatic relations -– for the Leaders’ Summit and our desire to deepen relations with Laos under the Connect framework. In my subsequent meetings, I had the opportunity to discuss key issues and initiatives at the core of the various Connect pillars as applied in Laos.

For example, under the Business Connect pillar, I met with representatives of the American Chamber of Commerce in Laos at a Ford dealership and toured a Coca-Cola bottling plant to learn first-hand about the business climate in Laos. As the Lao government seeks to make itself a land–linked instead of a landlocked country, considerable opportunities exist for U.S. firms in Laos to benefit from its unique geography and ASEAN economic integration — provided that the processes to move goods across borders are transparent and efficient.

To promote further business connectivity, I subsequently met with the Director General of Lao Customs to discuss how to tackle the bottlenecks raised by U.S. firms and programs we are pursuing, such as trainings for customs officials, that can benefit our businesses. I also visited a Special Economic Zone, the Vientiane Industry & Trade Area (VITA), to explore opportunities for U.S. firms to avail of tax breaks and expedited clearance processes in setting up shop in Laos.

Under the Innovation Connect pillar, I met with a group of 40 impressive entrepreneurs in Laos and shared with them programs and tools to support their endeavors, such as the Young Southeast Asia Leadership Initiative (YSEALI) and the ASEAN SME Online Academy. Inspired by the conversations he had at the Global Entrepreneurship Summit (GES) in Marrakesh in 2014 jointly hosted by the United States and Morocco, one such entrepeneur persevered in the face of cultural and financial barriers to open up three coffee shops across Vientiane. Another enterprising Lao entrepeneur with a passion for digital marketing availed himself of a key networking opportunity at Start-Up Weekend, supported by the U.S. Embassy, to connect with a major advertising agency. Through that agency, he has secured multi-nationals such as Coca-Cola as clients. Four months into his company’s founding, his team now consists of ten people.

Lastly, under the Policy Connect pillar, I met with senior Lao officials to discuss policies to enable business growth and development. At the Department of Small and Medium Enterprises Promotion, we discussed avenues to promote access to finance, simplify business registration processes, and secure certifications in order to enable SMEs to flourish, create jobs, partner with U.S. firms, and integrate into the regional supply chain. Similarly, at the Ministry of Posts and Telecommunications, we discussed the challenge and imperative of promoting greater internet connectivity as a means for economic development in a country estimated to only have around 15 percent internet penetration and further impeded by a lack of Lao language content on-line. We agreed to explore potential solutions in consultation with the U.S. private sector.

My visit to Laos impressed upon me the clear desire for U.S. leadership and enhanced economic engagement in ASEAN to mutual benefit.  U.S.-ASEAN Connect provides a framework to do just that — leading into and beyond the President’s historic visit to Laos next month.

About the Author: Ziad Haider serves as the Special Representative for Commercial and Business Affairs at the U.S. Department of State.