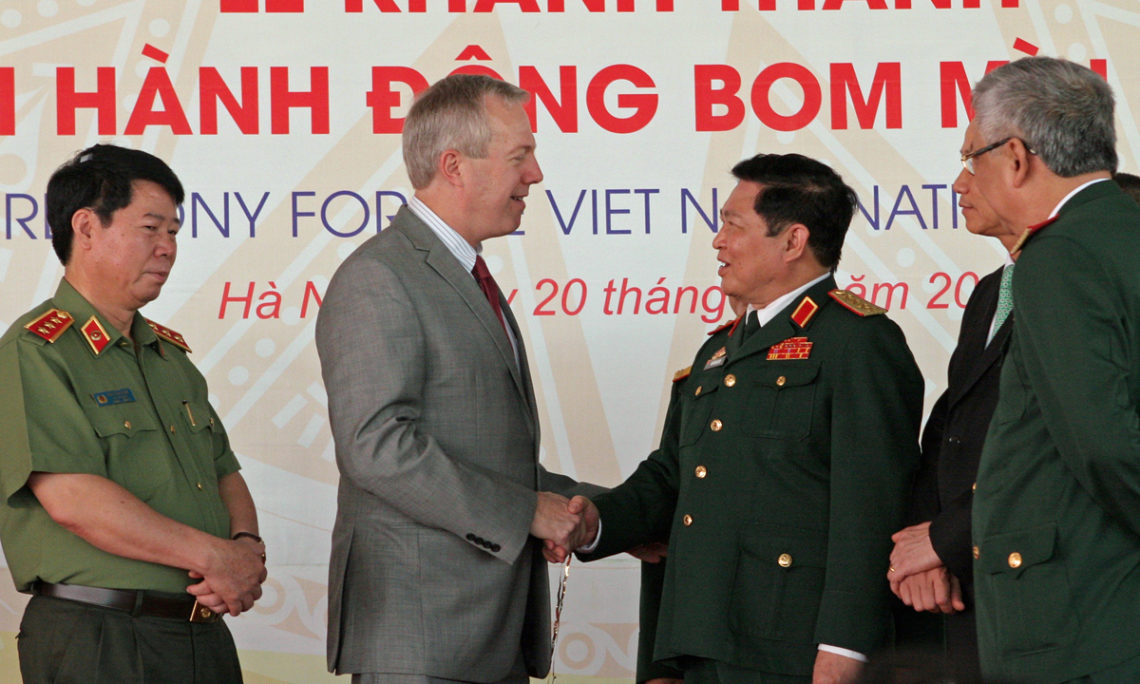 Ambassador Osius at the VNMAC Inauguration and Partner Conference.

I’m honored to be here today, to celebrate the opening of VNMAC’s new headquarters and the launch of the Mine Action Partnership Group.

I come to you today when the United States, Vietnam, and many other partners, are focused on the future and advancing peace, prosperity, and human dignity together.  President Obama spoke about this when he addressed the Vietnamese people in May and I spoke about it just last month at the Ho Chi Minh Academy.  To summarize very simply, the world we build for our children, can and should be better than the world of today or of the past.

When discussing our joint future, Vietnamese often say, “Khép lại quá khứ, hướng tới tương lai.” Close the past, and look towards the future.  We’re here today because we know that closing the past does not mean forgetting the past.  We know that if we are honest and mindful about our history, we can create an even better future together by dealing with it responsibly.  Both President Obama and I care deeply about this effort.  The President reaffirmed this commitment only three months ago during his visit to Vietnam.

To the people of Vietnam, President Obama talked about how Cold War rivalries and fears of communism pulled us into conflict. He described how we learned once more that war, no matter what our intentions may be, brings serious consequences, such as unexploded bombs. The President told the story about Vietnamese and Americans acknowledging the pain and the sacrifices on both sides. In this way, the very war that divided us became a source of healing.  And so, over the last twenty years, the relationship between Vietnam and the United States transformed.  This transformation allowed the United States to help remove landmines and unexploded bombs, because, as the President declared, “no child should ever lose a leg, just playing outside.”  With those words a short time ago, President Obama renewed our pledge to help Vietnam overcome the consequences of war.  He celebrated the same partnerships that we celebrate today.

I have been fortunate to witness the transformation President Obama described first hand.  Our UXO cooperation with Vietnam began twenty years ago, in a province called Quang Tri.  And here I should congratulate Quang Tri for twenty years of international mine action cooperation, a milestone the province celebrated last month.  What a tremendous achievement!  I wasn’t there to celebrate but I was there over twenty years ago when the partnership began.

I saw the consequences of war, the unexploded bombs lying on the side of the road and in the fields.  I saw the bomb craters and a landscape that reminded me of the moon.  And I heard the stories about how unexploded bombs had affected communities, families, and children.  But even twenty years ago, the people were focused on healing and on the future.

One year ago, I went back to Quang Tri, to see the new Legacy of War Coordination Center and a new phase in our cooperation that will help remove even more bombs.  I went to see for myself the great progress in making the province safe.  But even after twenty years of effort, I also saw the work was far from finished.

I am here today, because the United States stands beside Vietnam in the work that remains.  Our annual funding, 12 million dollars this year, reflects this firm promise.  Across the country, we’re supporting everything from victims’ assistance, risk education, capacity building, and survey and clearance of UXO.

We have a growing partnership with VNMAC as Vietnam enters a new phase in its national mine action program.  Our navies are working together on underwater demining, while our armies cooperate to integrate Vietnam’s vast experience with international standards.  We are helping develop a national information management capacity based on the lessons we have learned in Quang Tri.

We are proud of our partnerships with the provinces, with the 504 committee, and with the Vietnam National Mine Action Center to help Vietnam address the extensive contamination that is still a threat to the people of Vietnam.

Over the years, in many ways, it wasn’t the governments but ordinary people and organizations outside of government that made this possible.  So we are also proud of our partnerships with all of the international NGOs and other members of the public who have worked in Vietnam over the last twenty years.  These NGOs and ordinary citizens worked to build bridges between Americans and Vietnamese and improved lives in Vietnam.  This represents some of the very best of our shared values that I mentioned earlier – our optimism and our desire to build a peaceful and prosperous future together.

We know that we are making a difference.  Vietnam is clearing more bombs.  Fewer citizens are being hurt or killed.  And together, we are saving lives.  Our cooperation will not only help save lives in Vietnam but will also save lives around the world when Vietnam begins contributing its expertise to Peace Keeping Operations.  We look forward to continuing our strong partnerships into the future, and co-chairing the Mine Action Partnership Group.

Congratulations to VNMAC as you move into your new headquarters.  Through our partnership, we will build a better world for the children of Vietnam, a world where they can play and walk the earth in safety and free from fear.

That is our commitment to you in the context of “truyền thống hòa hiếu” and because “Dĩ hòa vi quý.”