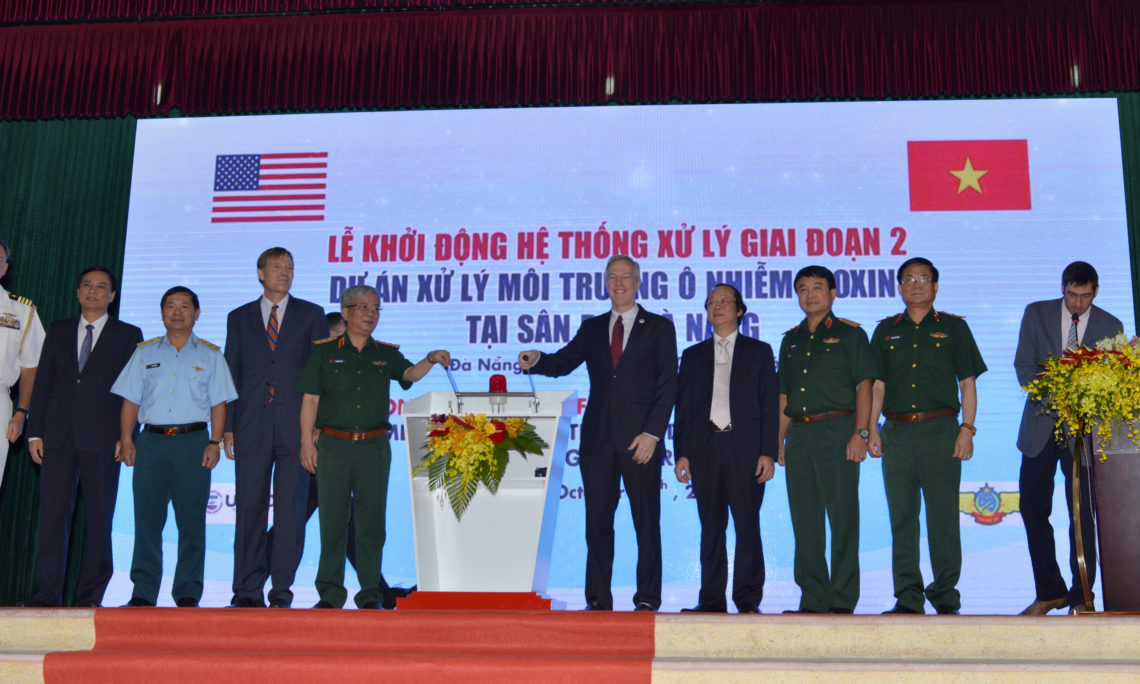 DANANG, October 18, 2016 – Today, Vietnam and the United States jointly commemorated the start of the second and final phase of thermal treatment at the Danang Airport.  This phase will remediate a second batch of approximately 45,000 cubic meters of dioxin-contaminated soil and sediment under a project that is greatly benefiting the people of Danang and is of historic importance for the bilateral relationship. U.S. Ambassador Ted Osius and Senior Lieutenant General Nguyen Chi Vinh, Vietnam’s Vice Minister of National Defense, ceremoniously switched on the thermal treatment system with many U.S. and Vietnamese government officials, representatives of foreign embassies and development partners and media representatives in attendance.

“I am encouraged by how this project continues to be a symbol of our honesty about the past, dealing with what remains, and turning an issue of contention into one of collaboration.  Both Vietnamese and Americans together enjoy great benefits from our growing friendship,” said Ambassador Osius.

The Environmental Remediation of Dioxin Contamination at Danang Airport Project, managed by the U.S. Agency for International Development (USAID) and Vietnam’s Ministry of National Defense, will treat an estimated 90,000 cubic meters of contaminated soil and sediment to less than the Government of Vietnam’s standard of 150 parts per trillion. In May 2016, the two governments announced the successful treatment of approximately 45,000 cubic meters of contaminated soil from the first phase of thermal treatment, as well as the beneficial reuse of the treated land and soil to expand the Danang International Airport. The second phase of thermal treatment is expected to be completed in mid-2017 with site restoration and demobilization expected in 2018. The long-term impact of the project will be the elimination of potential health risks associated with dioxin exposure from the site.

The governments of the United States and Vietnam have collaborated on issues related to Agent Orange since 2000. The Danang Airport Project was launched in August 2012 and serves as an important milestone in the bilateral relationship and for the people of Danang. In July 2013, President Obama and Vietnamese President Sang announced the launch of an environmental assessment at Bien Hoa Airbase as part of the U.S.-Vietnam comprehensive partnership. USAID and Vietnam’s Ministry of National Defense, along with other stakeholders, finalized the environmental assessment of Bien Hoa in May 2016. The assessment, available here , evaluates a range of potential dioxin remediation alternatives for the Bien Hoa Airbase.

During his visit to Vietnam in May 2016, President Obama announced a U.S. commitment to partner with Vietnam to make a significant contribution to cleaning up dioxin contamination at Bien Hoa, and the two governments are now reviewing the detailed technical recommendations in the report and developing a plan to proceed.