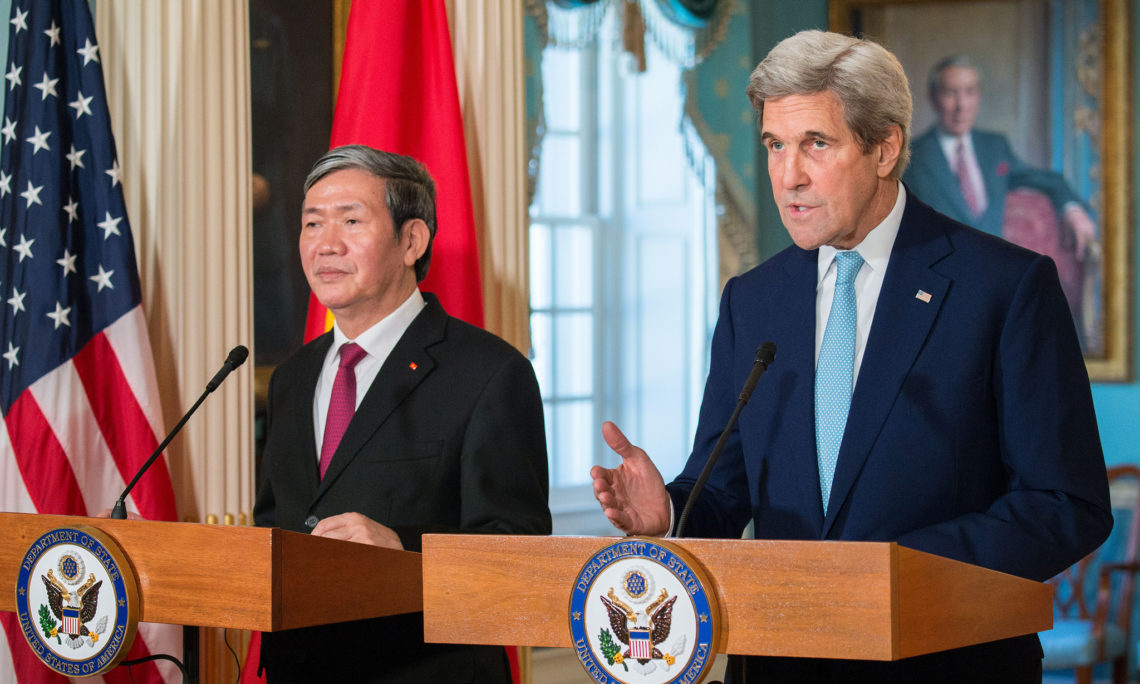 SECRETARY KERRY: Good morning, everybody. It’s my pleasure to welcome the Executive Secretary of the Communist Party of Vietnam Dinh The Huynh here to Washington for his first visit with me here in Washington. And he will be going from here to New York and to Boston and having other meetings in the course of his stay here. But the executive secretary is a member of the Politburo in Vietnam, and as executive secretary he is deeply involved in helping to move the relationship between Vietnam and the United States forward.

We have many different initiatives that we are working on with Vietnam. We had the pleasure of visiting with President Obama and we met with President Quang, where we began a number of new initiatives in terms of emergency response, counterterrorism cooperation, strengthening our ability to stand up for rule of law in the South China Sea.

You may want to have this as a – if you put that on your ear, you can – they’ll do a direct translation.

And so we are working on all of these initiatives now as we strengthen the relationship between the United States and Vietnam, which has really gone through an extraordinary evolution. Back in the early 1990s, I began a journey, together with Senator John McCain – both of us veterans of our military participation in that war, and the executive secretary is a veteran of his. And we both come committed to the notion that we can grow our relationship, strengthen the peace, define the peace in new ways.

And indeed, the people of Vietnam today are witnessing a remarkable economic revolution. They are engaged in amazing economic endeavor, a capitalist endeavor. It’s one of the fastest growing countries in the region.

And so we very much look forward to a very productive relationship going forward. We both share a commitment to the peaceful use and respect for rule of law in the South China Sea. And I think we talk about all the issues when we sit down, including issues of human rights and freedom of people to be able to organize in labor unions and be able to protect their rights as human beings.

So we’re very committed to ratifying the TPP, a critical relationship, reflecting modern practices in our conduct of trade and economic affairs. And so we have a lot to talk about and I’m very, very happy to welcome the executive secretary here. And hopefully his – your piece is working. I hope it is. Are you – is that – can you hear? Good.

So Mr. Executive Secretary, the floor is yours.

EXECUTIVE SECRETARY HUYNH: (Via interpreter) Secretary Kerry, I would like to thank you and the Department of State and the Government of the U.S. for the invitation and also the warm hospitality extended to myself and the Vietnamese delegation.

Mr. Secretary was one of the pioneering U.S. leaders who have worked very hard, incessantly, in many decades to promote the bilateral relationship between the U.S. and Vietnam on the basis of respect for independence, sovereignty, territorial integrity, political system, and also development strategy of each other.

Mr. Secretary joins Senator McCain in supporting the resolution that calls for an end to the embargo on Vietnam and laid the foundation for the normalization of the Vietnam-U.S. relationship, which helps propel the relationship to the current level on – in the spirit of shelving the past, overcoming differences, capitalizing on similarities, and heading to the future that was agreed upon by our leaders. Vietnam will always consider Mr. Secretary a close friend of ours, and we thank you sincerely for the meaningful contributions you have made to the bilateral relations between our two countries.

And we will have very candid talks together about the relationship between our two countries. We will review the efforts that the Obama Administration has made in promoting the U.S.-Vietnam relationship; also the implementation of the agreements made between our leaders. We will also discuss ways to further promote the comprehensive partnership between Vietnam and the U.S. and add substance to this relationship in the interests of the two peoples for peace, stability, cooperation, and development in the region and the world over.

And on the occasion of visiting the Department of State, I would like to express my sincere thanks to you all present here for the contributions you have made to promoting the Vietnam-U.S. relationship. And we hope that you would continue to support us in promoting the bilateral relations between our two countries. Thank you.

SECRETARY KERRY: Thank you. Thank you very much. Thank you, everybody.