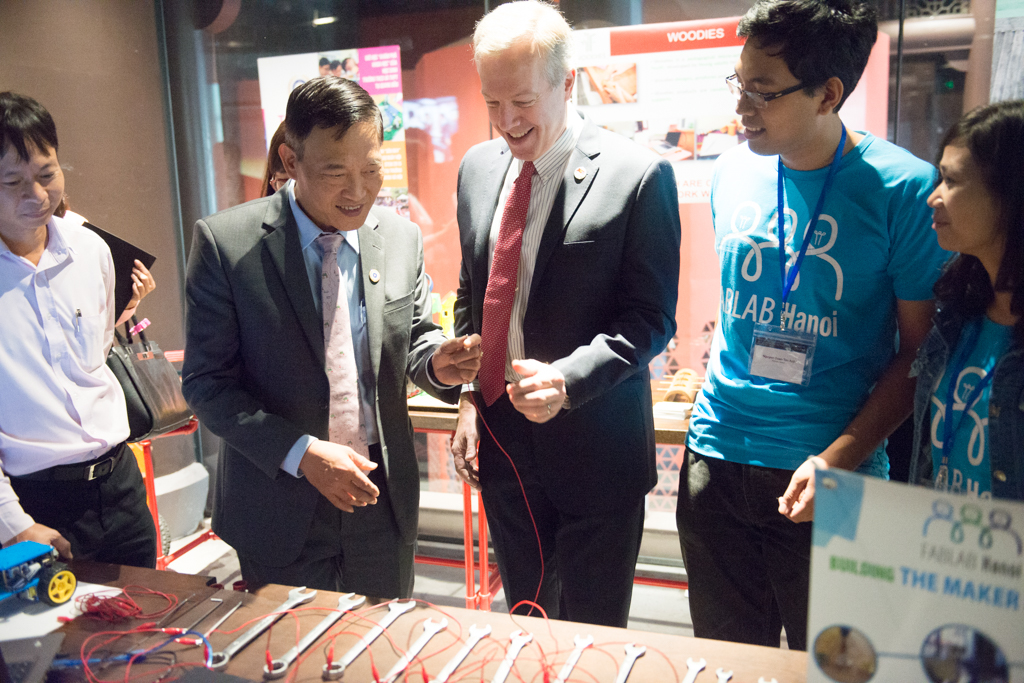 Ambassador Osius and Vice Minister of Science and Technology Tran Van Tung test out an electricity and music experiment by a participant in Hanoi.

“Entrepreneurship is about people, and the networks they create to support their ideas and move forward. The more people I meet, the more I am convinced that innovation is vital to Vietnam’s future,” noted Ambassador Osius during the launch in Hanoi.

During his address to participants, Rajesh Nair, the Director of Asia School of Business Innovation and Entrepreneurship Center in Kuala Lumpur, noted that maker training programs help students, particularly recent graduates, to find jobs in a competitive market. Nair cited the development of digital competence and the sense of initiative and entrepreneurship the forums inspire. “All of these skills are needed for makers,” said Nair. “Schools need an environment that will encourage the habit of creativity and critical thinking. This builds build self-confidence.”

This marks the second year that Arizona State University has hosted the Makers Movement Promotion Forums. In 2015, forums in Ho Chi Minh City and Danang brought together entrepreneurs and representatives of small and medium enterprises, industry, government, academia, and a large number of students.

Arizona State University has been actively involved in the modernization of Vietnam’s STEM higher education through the Higher Engineering Education Alliance Program (HEEAP), which was founded in 2010 as a collaborative partnership between ASU, USAID, and Intel. In 2015 a third investment valued at $10.8 million was made into the Building University Industry Learning and Development through Innovation and Technology (BUILD-IT) Alliance. Based on the pillars of institutional policy, quality, curriculum, faculty innovation and technology, BUILD-IT leverages diverse government, industry, and academic partners to link STEM instruction in Vietnamese higher education institutions to the needs and capabilities of industry partners in order to produce graduates who lead inclusive, technology-based growth across the country.