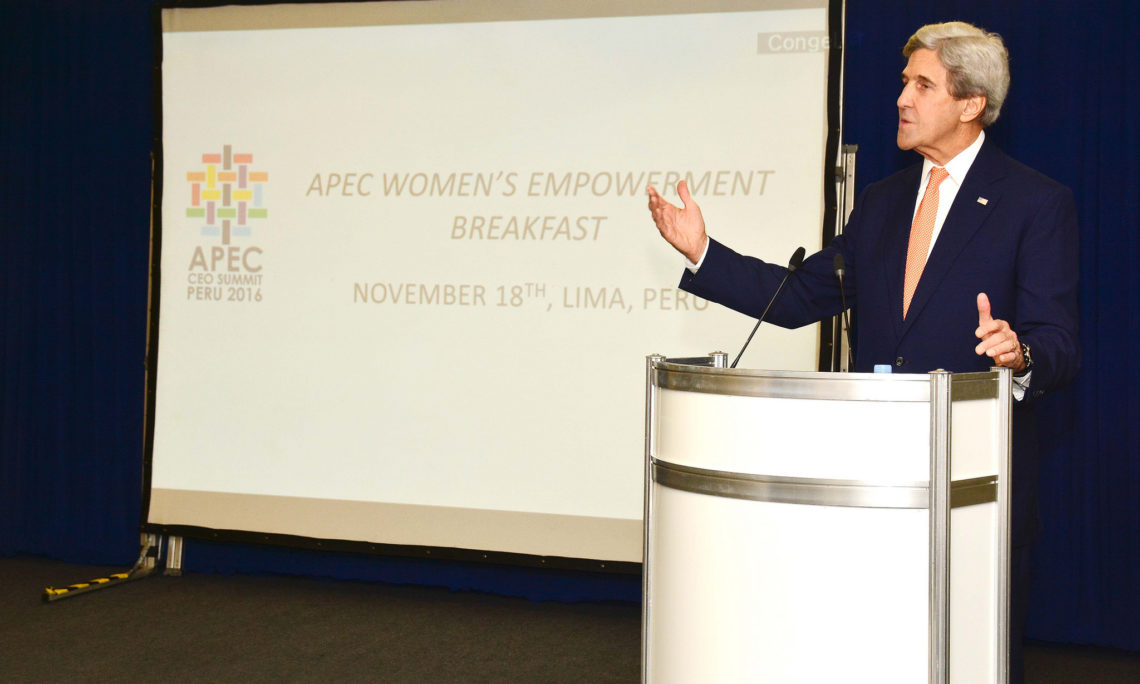 Today Secretary Kerry announced that the United States intends to work jointly with Chinese Taipei to support the creation of an APEC sub-fund on women and the economy. The announcement came at a breakfast celebrating five years of effort within APEC to advance women’s economic participation. Through the sub-fund, APEC economies would be able to apply for funding to support new or existing APEC initiatives focused specifically on women’s economic empowerment.

The breakfast marked the five year anniversary of the San Francisco Declaration, endorsed at the 2011 High Level Policy Dialogue on Women and the Economy, in which ministers and senior officials agreed to take concrete actions to integrate women more fully into APEC economies, harness their talents, remove barriers that restrict their full economic participation, and maximize their contributions towards economic growth. Private sector leaders from Walmart; Merck KgAA, Darmstadt, Germany; and WEConnect International also participated in the breakfast, where they announced additional commitments to APEC Women and the Economy Initiatives.

Over the last five years, the United States has championed a number of initiatives through APEC that build on our commitment to the Declaration and advance women’s roles in APEC economies through collecting and analyzing data, strengthening the regional ecosystem for entrepreneurs, promoting women’s health, and advancing women and girls in traditionally male-dominated sectors, including science, technology, engineering, math, and transportation.

Women and the Economy Dashboard

To support APEC-wide efforts to collect and track data on women’s economic participation, the United States developed the Women and the Economy Dashboard, a ground breaking data-based framework for policy action that launched during the 2015 APEC Women and the Economy Forum. The dashboard includes a collection of data that gives a snapshot of the status of women in APEC and enables economies to mark and measure progress on 75 indicators for women’s participation. The Dashboard helps APEC economies prioritize gender mainstreaming efforts, policy discussions, and capacity-building, with updates tracked every two years.

Data collected by the Women and the Economy Dashboard revealed that every APEC economy is falling behind when it comes to women’s inclusion in science, technology, engineering, and math (STEM). This year, the United States launched a new initiative to break down barriers to women’s participation in STEM-related fields. The initiative consisted of an APEC-wide research study to examine efforts across the region to increase women’s participation in these fields and two capacity building workshops in which representatives from the private sector, civil society, and governments shared best practices and lessons learned from ongoing programs. This initiative also included a focus on encouraging adolescent girls to pursue STEM education and careers, including through the APEC 2016 WiSci STEAM camp, which brought together nearly 100 girls from the United States, Mexico, Chile, and Peru to learn directly from industry experts about opportunities in STEM. Our efforts this year culminated in the APEC Women in STEM Framework, which shares best practices from across APEC economies and recommends policy reforms for both governments and the private sector to increase women’s participation and advancement in these fast-growing fields.

After an APEC study found that the lack of women’s entrepreneurial networks in APEC is a barrier for growth for woman-owned businesses in the region, the United States launched the WE-APEC initiative. This initiative works to identify and connect women’s entrepreneurship networks in each economy with public and private sector support services and global supply chains to ultimately expand economic opportunities and regional trade. WE-APEC’s resources include a directory of over 600 organizations across the region that are working to expand and strengthen the ecosystem for women entrepreneurs.

Sustainable economic growth cannot be achieved if women are unable to fully participate in the economy due to health concerns. To address this issue, the United States together with the Philippines launched the Healthy Women, Healthy Economies initiative, a public-private partnership that is working to advance women’s health and well-being to increase their economic participation. Through this initiative, governments and private industry joined together to develop a policy toolkit to break down health related barriers to women’s economic participation, including workplace health and safety, gender-based violence, and work life balance.