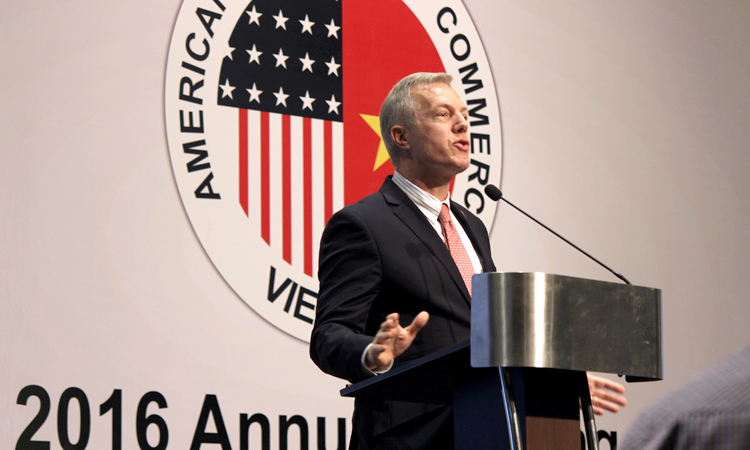 Ms. Mai Ngan Ha, thank you for the very kind introduction, and congratulations on being named a finalist in this year’s AmCham Scholars competition. And thank you to the American Chamber of Commerce for once again inviting me to speak.

Governors of the American Chamber of Commerce, Amcham members, friends and distinguished guests, good evening. I am delighted to be here to recognize AMCHAM for yet another year of excellent support to U.S. business in Vietnam, as well as for AMCHAM’s many years of hard work as our partner in building the U.S.–Vietnam relationship.

When I spoke to you last year, the United States and Vietnam had just celebrated the 20th anniversary of diplomatic relations, and we were setting out on a new journey of cooperation between our two countries driven by the promise of a landmark trade agreement. Since then, we’ve seen U.S.-Vietnam relations grow deeper and stronger than ever before.
In May, during his historic visit, President Obama joined President Tran Dai Quang to issue a Joint Statement in which they laid out a broad and ambitious plan that will define the partnership between our two countries for years to come. We set ourselves comprehensive goals ranging from improving security cooperation to partnering on protecting freedom of religion and expression. We pledged to look beyond our own borders and work together to tackle global challenges like climate change and illegal wildlife trafficking. This joint statement was an important demonstration of our mutual commitment to invest in a peaceful and sustainably prosperous future for both of our nations.

The aspect of this agreement that I’m probably most excited about is the imminent launch of two major education initiatives: Peace Corps in Vietnam and Fulbright University in Vietnam. When the Peace Corps mission opens officially in the near future, it will bring to Vietnam some of the best the America has to offer. Bright, energetic, and dedicated volunteers who, as native speakers of English, will be a unique resource for Vietnam’s diligent students. And Fulbright University, the first private, nonprofit, American-style Vietnamese University, will bring a transdisciplinary approach to higher education and will demonstrate the value of academic freedom.

The programs are, we hope, just the beginning, and they will lead to more opportunities to collaborate.

As we build on this success, we will also build within the youth of Vietnam a cadre of professionals with the skills and education that American investors demand. That rising generation will help the members of this Chamber better access the opportunities presented by the Vietnamese market, and will open possibilities for Vietnam to tap into the global economy.

Of course, undergirding the joint statement and the expansion of our partnership over the last few years has been the TPP; and I know you’re not going to let me leave this podium without speaking to that. First, let me say how proud I am of the progress Vietnam has made towards implementing its commitments to the reforms laid out in the TPP since the last time I addressed you.

We’ve seen Vietnam rise quickly in the “ease of doing business” rankings, in large part because of significant efforts to reform its system of State Owned Enterprises and allowing foreign investors greater access to protected sectors. Vietnam has also improved its protections for intellectual property and the environment. And perhaps most significantly, we have seen the country make laudable strides in allowing Vietnamese labor to organize, taking an important first step toward leveling the global playing field.

This progress has already paid noticeable dividends as U.S. businesses regard Vietnam as an increasingly reliable partner: U.S. exports to Vietnam were up 44% in the first half of this year.

At the same time, Vietnam’s exports to the United States are up 12%, putting the bilateral trade increase at 17%. Of America’s 50 largest export markets, only three enjoyed double-digit growth in trade volume during that period, and Vietnam is the largest market of the three.

Now for the elephant in the room: I have to admit that our Presidential election has generated more than a little uncertainty. It seems every conversation I’ve had with friends and colleagues over the last few weeks has inevitably come around to President-Elect Trump and his plans for foreign policy, particularly trade with Asia.
While it’s still too early to speak to policy specifics, I can say this: irrespective of politics, the interests of the United States in Vietnam remain unchanged. And I stand by the assertion that American interests align with Vietnam’s.

It remains in our mutual interest to see intellectual property rights protected. U.S. companies must feel secure in bringing production to Vietnam, and Vietnamese entrepreneurs must be free to innovate with the confidence that they will be able to reap the fruits of their labors.

It remains in our mutual interest to see Vietnamese laborers enjoy the right to organize.

American workers must be able to compete on a level playing field. U.S. businesses must trust that they can bring their factories here knowing that the standards they must meet are shared by all. Vietnamese workers must be able to create their own wealth in order to fully participate in the global economy. And it remains in our mutual interest to promote trade between our countries.

When President Obama spoke at the APEC conference in Lima, he reminded us that – for all its faults – the world we live in is integrated and connected in a way that it has never been before. It is simply not possible to cut ourselves off from one another, and that is a fundamental truth that transcends elections. Or more bluntly: We depend on each other.
Because of that, it will remain my mission to see that the connections between the United States and Vietnam continue to grow, and that U.S. businesses are able to more easily bring their products to over 90 million Vietnamese consumers.

And I can tell you with confidence that the Vietnamese leaders remain eager to attract foreign business, as they look to clear that final hurdle and bring Vietnam fully into the ranks of middle-income countries. We want to continue to encourage and support that process.

In the short term, you – as investors and business partners – will play a critical role, emphasizing the fundamental interests of trading partners in the success of Vietnam’s reforms.
I was heartened to see that the March conference hosted by this Chamber and the U.S. Chamber of Commerce, entitled “Vietnam and the United States in 2017 and Beyond,” will focus on the way forward, despite any current uncertainty. This is exactly the message we need to send right now, and I will be happy to lend any support I can. Together, we can underscore the key message that these reforms will bring lasting benefits – more jobs, GDP growth, a higher position on the global value chain – that will come to Vietnam as it opens its markets and brings its regulations into line with international standards.

I hope that in our discussion today we can take advantage of the collective expertise in this room and come up with some good ideas to help solve Vietnam’s remaining trade and reform issues and foster the continued growth in trade between the United States and Vietnam. We still have momentum on our side; let’s not waste this opportunity.

Thank you very much; I look forward to our discussion.