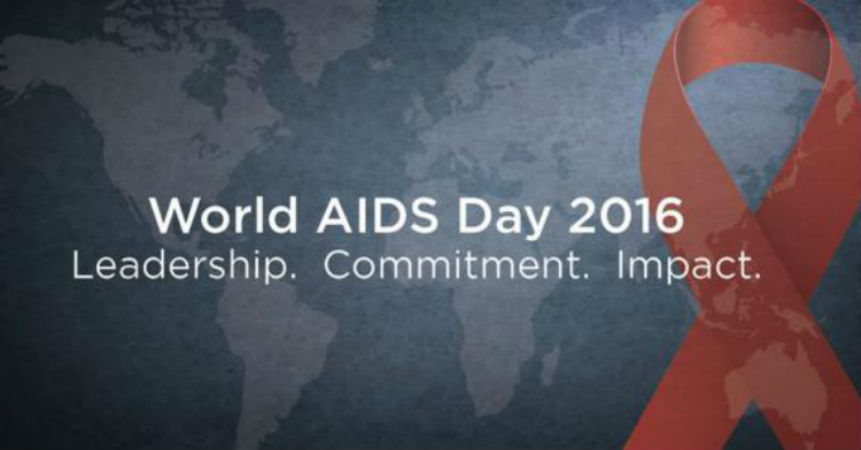 A red ribbon -- the universal symbol of awareness and support for those living with HIV -- overlays an image of a world map. [PEPFAR Image]

Today, people all over the world came together to commemorate World AIDS Day. This morning, through the U.S. President’s Emergency Plan for AIDS Relief (PEPFAR)’s ThunderClap — a virtual and virtuous flash mob — simultaneously tweeted their commitment to end AIDS by 2030, reaching an audience of nearly five million people around the globe. On Capitol Hill and online, PEPFAR’s interactive HIV/AIDS Timeline is made its U.S. debut. And PEPFAR’s Ending AIDS Together documentary premiered, powerfully chronicling 35 years of the global AIDS response, and the U.S. government’s response to it.

Our World AIDS Day 2016 theme — Leadership. Commitment. Impact. — captures how we have invested with our voices, our capacity, and our dollars. PEPFAR is the largest commitment by any nation to combat a single disease in history, with strong bipartisan support since its inception. Our latest global results, released today, show that we are delivering unprecedented impact with our investments

Results from the PHIAs — which are funded by PEPFAR, conducted by the U.S. Centers for Disease Control and Prevention and ICAP at Columbia University, as well as local governmental and non-governmental partners — along with our program data have allowed PEPFAR to expand results and impact in a budget-neutral environment.

Yet, the work is far from done. Among adolescents and young people in these same three countries, these surveys found an average community viral load suppression of only 42 percent. This is concerning as the young population in Sub-Saharan Africa is expected to double by 2030 compared to the start of the epidemic. We must urgently continue to focus on HIV prevention and treatment for young people, while sustaining gains made in adults and babies.

As both President Obama and Secretary Kerry noted in their World AIDS Day statements, we know that achieving an AIDS-free generation — one in which no one is left behind — is possible, but it will not happen on its own. On World AIDS Day, we redouble our resolve to continue saving and improving lives around the world. Because we have the ability to finish what we started: delivering the first AIDS-free generation in over three decades.