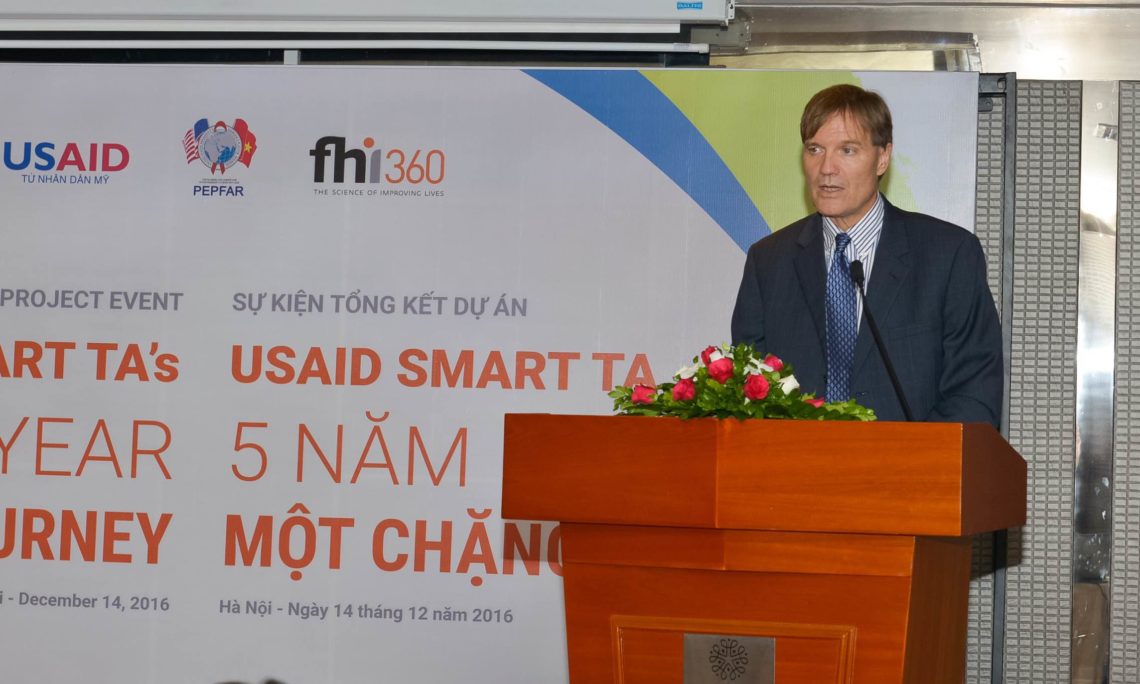 Launched in 2011, the five-year SMART TA project developed and deployed innovative models that addressed gaps in HIV prevention, care, and treatment, and improved the efficiency of these services. In its final year alone, SMART TA provided treatment to more than 23,000 people living with HIV and methadone treatment for nearly 19,000 people who inject drugs, which is more than 20 percent of all HIV and methadone treatment patients in Vietnam.

“Vietnam has achieved great results in the country’s HIV response in recent years as the response increasingly relies on local resources such as health insurance and national and provincial funding become the key support sources,” said USAID Vietnam Mission Director Michael Greene at today’s final project review workshop. “I am very pleased that the USAID SMART TA project made such significant contributions.”

As Vietnam assumes greater leadership of the HIV program, SMART TA helped integrate HIV services into the curative health system where facilities can be reimbursed through Social Health Insurance (SHI). HIV patients in Dien Bien and Nghe An were the first in the country to receive social health insurance reimbursement for HIV services as a result of the program’s close collaboration with and support provided to local partners.

Implemented by FHI 360 in partnership with Vietnam Administration for AIDS Control (VAAC), SMART TA also led or contributed to the development of national policy and curricula for every aspect of the HIV response, from testing and treatment to tuberculosis and methadone treatment, changing how HIV services are delivered in Vietnam. SMART Technical Monitoring Tools are now routinely used to assess and strengthen HIV services. Methadone treatment service models and local mentors, developed under SMART TA, are now the predominant mode for delivering and sustaining high quality and efficient methadone treatment across the country. The project’s work to integrate facility health information systems for HIV and health insurance is considered a best practice and is being replicated within and outside Vietnam.

Since 2005, the U.S. government through PEPFAR has supported life-saving ART for almost 57,000 people, and provided care to more than 62,000 adults and children nationwide. In the last year, PEPFAR assistance provided HIV tests to over 375,000 people and methadone replacement therapy to almost 25,000 people.