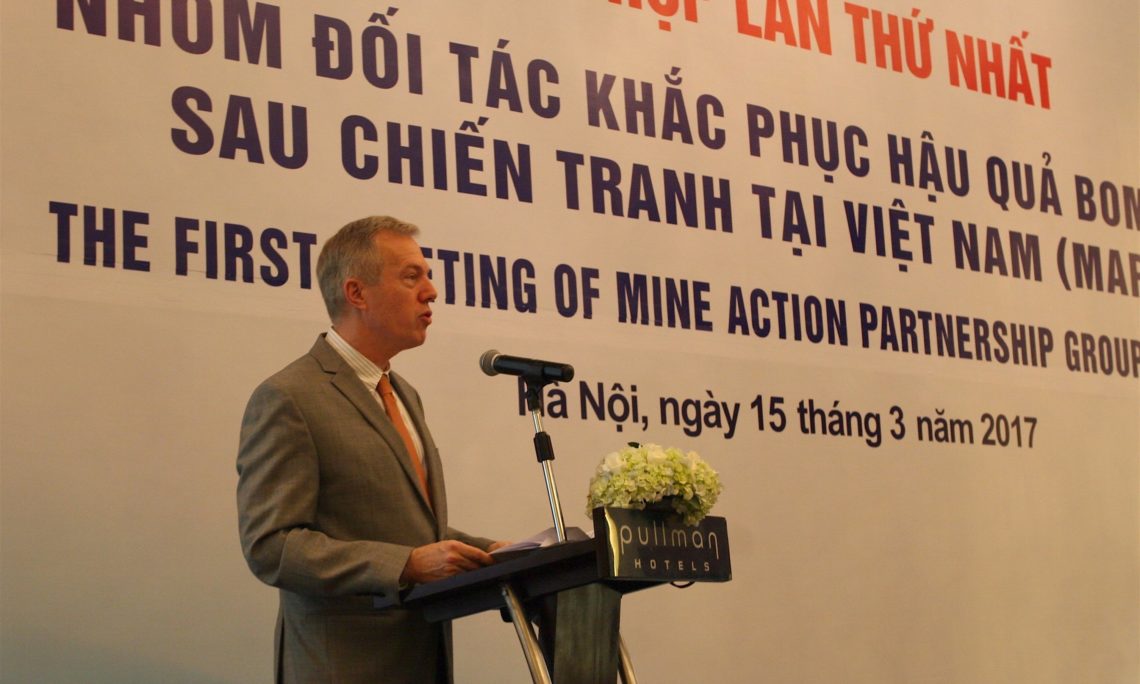 Ambassador Ted Osius giving remarks at the first Annual Donor Forum of the Mine Action Partnership Group on March 15.

HANOI, March 15, 2017 – Today, U.S. Ambassador Ted Osius and Vice Minister of Planning and Investment Nguyen The Phuong co-chaired the First Annual Donor Forum of the Mine Action Partnership Group (MAPG), a gathering of Vietnamese mine action agencies and international stakeholders dedicated to making Vietnam safe from the impact of explosive remnants of war.

“The goal is very simple:  To make Vietnam impact free and allow its citizens, its children, to walk the earth in safety and free from fear,” Ambassador Osius told the gathering.

At the direction of the Prime Minister, the MAPG was established to create an open dialogue between Vietnam and international partners on strategies, policies, and measures related to Vietnam’s Mine Action Program (Program 504).  Each year, a member of the donor community will co-chair the form with Vietnam. As Vietnam’s long-standing partner in mine action, the United States, represented by Ambassador Osius, was named co-chair for this first working year. At today’s donor forum, participants discussed the MAPG’s organizational structure and the 2017 work plan. Also, the co-chairs encouraged international stakeholders to continue their active role in reducing the impact of unexploded ordnance (UXO).

“We have always welcomed partnerships with other donors.  With the UK, we have co-funded projects to build national capacity. With Japan, we support clearance efforts in Quang Binh to provide farmers with peace of mind.  Ireland and the UK help us build expertise at the Quang Tri Legacy of War Coordination Center.  The private sector is teaching farmers how to effectively use land cleared through our projects. We willingly share experiences, such as with the Republic of Korea, who will soon become a major contributor. All of this is to say, the international community can make a difference in Vietnam, in many ways, big or small,” said Ted Osius in his opening remarks.

Mine action assistance to Vietnam is fundamental to U.S.-Vietnam relations and fulfilling the goals of the Comprehensive Partnership. U.S. cooperation in this sector focuses on two priorities: 1) Addressing the consequences of the explosive remnants of war in high-contamination areas; 2) supporting Vietnam’s capacity to manage residual risk of UXO. Annual funding from the State Department, through the implementing partners, was nearly 12 million dollars in 2016.  Altogether, the Department of State has contributed nearly $100 million to address UXO in Vietnam since 1993.  Also, the U.S. Department of Defense continues to work with Vietnam’s Ministry of National Defense and VNMAC to build needed capacity and develop best practices to address explosive remnants of war on land and under water.