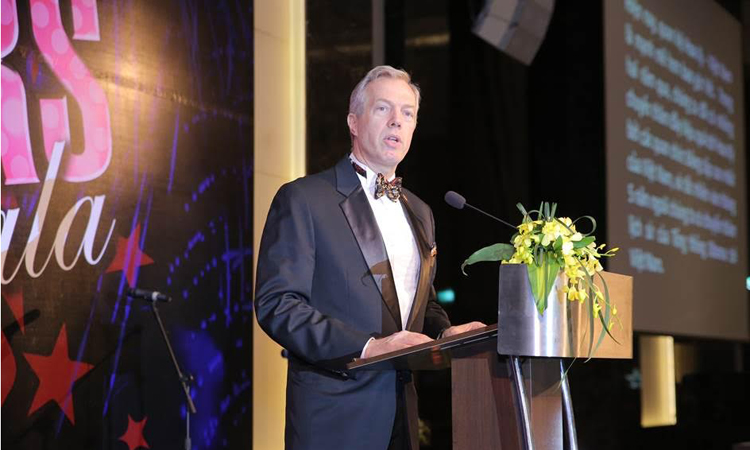 Ambassador Osius’s Remarks to the AmCham Movers and Shakers Gala, 3/25/2017

Today, the U.S.-Vietnam relationship is stronger than ever.  In the past two years, we’ve had productive visits to the United States by Vietnam’s highest party officials, and of course last May we had the historic visit by President Obama to Vietnam.  I watched a million people line the streets of Ho Chi Minh City to welcome him, in what was the biggest international turnout of his presidency.  I don’t think you could ask for a clearer expression of the Vietnamese public’s desire to engage with America, and much credit for that goes to the business community.

But with changes in leadership in both the United States and Vietnam, it is more important now than ever that we keep the lines of communication open. Many here in Vietnam – including, I’m sure, those in this room – were frustrated when the United States withdrew from TPP, and some worried over who would fill the void if this withdrawal brought a larger U.S. turn away from the region.  But those concerns, while maybe understandable, are unfounded.

I said this the last time I spoke to you, and it remains true: the fundamental interests of the United States in Vietnam have not changed.  Those interests are wide ranging, but tonight, I’d like to focus on two in particular: first, it remains in our mutual interest to pursue the freer and fairer trade of goods and services between our countries.  And second, it remains in our mutual interest that we build people-to-people ties through educational programs and exchanges.

The United States cannot and will not ignore Vietnam as a trading partner.  This country presents an enormous potential export market for American products, and in fact, Vietnam is our fastest growing export market in the world of those over one billion dollars.  In the last two years alone, U.S. exports to Vietnam have grown by 77 percent, while in most of the rest of the world those numbers fell.

And the Vietnamese are only getting wealthier, with a burgeoning middle class that places great value on American brand name goods, on travel to America’s tourist destinations, and on the kind of high-quality agricultural produce that our farmers are renowned for.  In Vietnam, favorability ratings toward the United States top 90 percent.  This is a market that is ready and waiting for more high-quality American products.

Vietnam is where the opportunity is, and we will continue to work to lower barriers to trade, help the Vietnamese government make it easier to do business, and create a high-standard, rules-based trade framework to ensure that our manufacturers, our farmers, and the people in this room have fair access to that opportunity.

Now, I’m happy to help promote all of America’s exports, but the one I’m perhaps most proud of, the one that represents the best of what the United States has to offer, is our unparalleled system of higher education.  Nothing strengthens ties and eliminates prejudice between countries better than young people coming together to learn from each other’s cultures.

And that’s why I’m so excited to see how eager Vietnamese students are to access American universities, and how committed their parents are to helping them get there.  There are currently over 21 thousand Vietnamese university and post-secondary students studying in the United States, making Vietnam the sixth largest source of foreign students studying in the United States.  What’s more, this number is growing faster than almost any other country in the world, up by 29 percent in the last two years.  Vietnamese students contribute almost 700 million dollars a year to the U.S. economy, they support almost 10 thousand jobs, and we are happy to welcome each and every one of them.

But because not every student will have the opportunity to travel, I also recognize the importance of creating educational opportunities here in Vietnam.  Soon, the United States will bring the first class of Peace Corps volunteers to the country.  They will teach English to thousands of eager young minds all the while showing the communities they live in that Americans aren’t so different, and that our young people are just as interested in learning from Vietnam as Vietnamese youth are from us.  In addition, we’re about to open Fulbright University Vietnam.  This will be Vietnam’s first private, non-profit, American-style university, and through its rigorous and cutting-edge curriculum will demonstrate the value of academic independence and freedom of expression.  Together, these programs begin to create in Vietnam the educated and skilled workforce that international employers demand.

I’m pleased to see so many here tonight supporting the AmCham Scholars program.  I’ve always been proud of the social responsibility efforts of American businesses, and I’m glad that AmCham has chosen to focus those efforts on education.  I will continue to make the case that an American education offers an unbeatable return on investment, but wherever these Scholars choose to enroll, you can take pride in the knowledge that you have helped some of Vietnam’s best, brightest, and most deserving achieve their dreams.