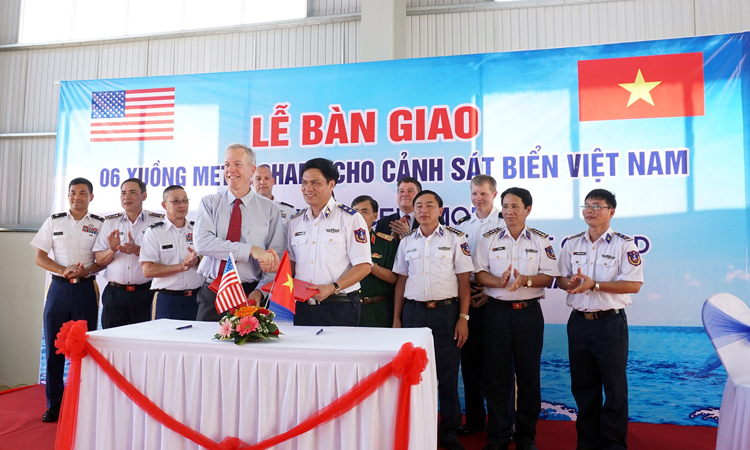 Hanoi, May 22 – On May 22, U.S. Ambassador to Vietnam Ted Osius officially handed over six 45-foot Metal Shark patrol boats to the Vietnam Coast Guard (VCG) in Quang Nam, Region II, marking another important step in the expanding security cooperation between the United States and the Socialist Republic of Vietnam.

Delivering these patrol vessels represents deepening cooperation in the areas maritime law enforcement, maritime search and rescue, and maritime humanitarian assistance operations within Vietnam’s territorial waters and exclusive economic zone. These patrols boats will assist VCG Region II in inter-costal patrols and law enforcement in smuggling, illicit trafficking, piracy and armed robbery against ships, and illegal fishing. Immediately after the transfer, VCG will begin to train on and operate the vessels, making them fully operational.

“Vietnam’s future prosperity depends upon a stable and peaceful maritime environment.  The United States and the rest of the international community also benefit from regional stability, which is why we are here today, and it is why we are very pleased to be working together with the Vietnam Coast Guard,” said Ambassador Osius at the handover ceremony.

The U.S. Embassy, through its Office of Defense Cooperation, coordinates U.S.-Vietnam security cooperation activities on behalf of U.S. Pacific Command to advance common defense goals and interests.  This cooperation, as agreed upon in the September 2011 Memorandum of Understanding on defense cooperation, includes security assistance and educational exchanges between the U.S. and Vietnamese militaries.