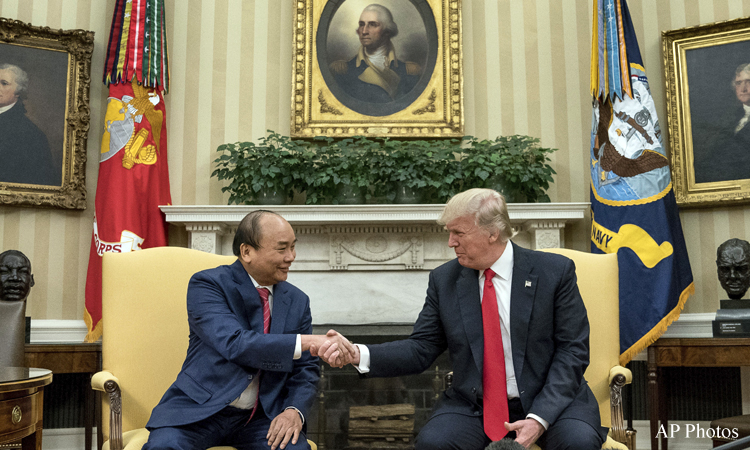 THE WHITE HOUSE
Office of the Press Secretary

The President of the United States of America Donald J. Trump hosted the Prime Minister of the Socialist Republic of Vietnam Nguyen Xuan Phuc at the White House today to chart an agenda for United States-Vietnam relations, building on the positive momentum of the Comprehensive Partnership between the two countries.

As a Pacific power with widespread interests and commitments throughout the Asia Pacific, the United States shares many important interests with Vietnam.  The two leaders emphasized that many opportunities lie ahead for United States-Vietnam relations, including increasingly enhanced political, diplomatic, economic and trade ties, and ever-growing cooperation in the areas of science and technology, national defense and security, education, people-to-people exchange, humanitarian and war legacy issues, as well as regional and international issues of mutual concern.  The two leaders are committed to pursuing these opportunities under an enhanced Comprehensive Partnership, grounded in respect for the United Nations Charter and international law, each other’s independence, sovereignty, territorial integrity, and respective political systems.

The two sides pledged to continue high-level contacts and exchanges of delegations, including through regular dialogue between the U.S. Secretary of State and Vietnam’s Minister for Foreign Affairs to discuss measures to enhance the bilateral Comprehensive Partnership.  They also committed to strengthen existing dialogue mechanisms, including party-to-party ties.  President Trump expressed his support for Vietnam in successfully hosting APEC 2017 and noted that he looks forward to visiting Vietnam and attending the APEC Leaders’ meeting in November.

The two leaders pledged to actively promote mutually beneficial and ever-growing economic ties to bring greater prosperity to both countries.  They underscored support for continued development cooperation.  Prime Minister Nguyen Xuan Phuc affirmed that Vietnam would pursue a consistent policy of economic reform and international integration, creating favorable conditions for foreign companies, including those of the United States, to do business and invest in Vietnam; protecting and enforcing intellectual property; and bringing its labor laws in line with Vietnam’s international commitments.  The two countries affirmed the importance of promoting bilateral trade and creating favorable conditions for the businesses of both sides, particularly through the effective use of the Trade and Investment Framework Agreement to address issues in United States-Vietnam relations in a constructive manner.  The two leaders welcomed the resolution of several priority trade issues, including mobile phone roaming services and veterinary drugs, and they pledged to continue to work together constructively to seek resolution of other priority issues of each country, including those related to intellectual property, advertising and financial services, information-security products, white offal, distiller’s dried grains, siluriformes, shrimp, mangos, and other issues.  The United States noted Vietnam’s interest in achieving a market economy status, and the two sides pledged to continue to consult in a cooperative and comprehensive manner via the bilateral working group.  Both sides welcomed the announcement of more than $8 billion in new commercial deals.

The two leaders pledged to strengthen bilateral defense ties under the 2011 Memorandum of Understanding (MOU) on Advancing Bilateral Defense Cooperation and the 2015 Joint Vision Statement on Defense Relations.  The two leaders discussed the U.S. Government’s recent transfer of a Hamilton-class Coast Guard cutter to help improve Vietnam’s law enforcement capabilities, and Prime Minister Nguyen Xuan Phuc expressed interest in acquiring more defense equipment from the United States, including additional Coast Guard cutters.  The two leaders also discussed measures to expand cooperation in such prioritized areas as humanitarian cooperation, war legacies, and maritime security.  They also looked into the possibility of a visit to a Vietnamese port by a United States aircraft carrier and discussed steps to further cooperation between the naval forces of the two countries.  The two leaders welcomed the signing of the Memorandum of Understanding on the establishment of the working group on the Cooperative Humanitarian Assistance and Medical Storage Initiative, and pledged to implement the arrangement expeditiously.

The two leaders pledged to strengthen cooperation in the fields of security and intelligence.  The United States and Vietnam pledged to work together to combat terrorism as well as transnational and cyber-enabled crimes.  Prime Minister Nguyen Xuan Phuc expressed his appreciation and looked forward to the United States’ cooperation and assistance to Vietnam in the area of United Nations peacekeeping operations, including the provision of equipment and support for Vietnamese officers’ participation in United Nations peacekeeping.

The two leaders welcomed the growth of people-to-people ties, especially through academic and professional exchange programs.  They recognized the important contributions of the Vietnamese–American community and the nearly 4,000 exchange alumni to United States-Vietnam relations.  They also noted that, with over 21,000 Vietnamese students currently in higher education programs in the United States, academic ties between the two countries are strong and will be strengthened even further through Vietnam’s support for the launch of the Fulbright University in Ho Chi Minh City.  The United States welcomed more Vietnamese students to study in the United States and remains committed to processing visas, including for students, in an expeditious manner in accordance with United States law.  The two sides also welcomed the establishment of the Peace Corps program to advance English language learning in Vietnam.

The two sides committed to work together to address war legacy issues, including through such joint efforts as dioxin remediation, taking note of the progress that has been made at Da Nang Airport and intent to discuss continued collaboration at Bien Hoa Airport, and the removal of unexploded ordnances. President Trump expressed appreciation for Vietnam’s continuing cooperation in the humanitarian mission of accounting for United States personnel still missing from the war, and pledged to cooperate with Vietnam in its efforts to locate its missing soldiers.

Prime Minister Nguyen Xuan Phuc affirmed that Vietnam will work actively with the United States to expeditiously return Vietnamese nationals subject to final orders of removal, using the 2008 United States-Vietnam Agreement on the Acceptance of the Return of Vietnamese Citizens as a basis. The two leaders pledged to set up a working group to discuss this issue.

President Trump and Prime Minister Nguyen Xuan Phuc welcomed the results of frank and constructive dialogue on human rights, including during the 21st round of the United States-Vietnam Human Rights Dialogue in May 2017, to narrow differences and continue to build mutual trust.  The two leaders recognized the importance of protecting and promoting human rights, and the interconnection between human rights and the security and sustainable development of each country. They encouraged further cooperation to ensure that everyone, including members of vulnerable groups, regardless of their gender, race, religion, or sexual orientation, and including persons with disabilities, fully enjoy their human rights.  The United States welcomed Vietnam’s ongoing efforts to refine its legal system to better protect and promote human rights for everyone.

On regional issues, the two leaders expressed their concern for the Democratic People’s Republic of Korea’s nuclear and ballistic missile tests, which violate multiple United Nations Security Council resolutions and escalate tensions in the region.  Both sides reaffirmed their support for the denuclearization of the Korean Peninsula and urged all parties concerned to strictly implement all relevant United Nations Security Council resolutions.

President Trump and Prime Minister Nguyen Xuan Phuc affirmed that the South China Sea is a waterway of strategic significance to the international community. The two leaders underscored the importance of freedom of navigation and overflight and other lawful uses of the seas, and noted with concern the destabilizing impacts that unlawful restrictions to the freedom of the seas have on peace and prosperity in the Asia–Pacific region.  The two sides also affirmed full support for the peaceful resolution of disputes without the threat or use of force or coercion, in accordance with international law, including full respect for diplomatic and legal processes, and called upon all parties concerned to implement their international legal obligations in good faith in any resolution to these disputes. They highlighted the importance that parties refrain from actions that would escalate tensions, such as the militarization of disputed features. President Trump stressed that the United States will continue to fly, sail, and operate anywhere international law allows.

The two countries pledged to continue to work together to address global challenges, including environmental protection, global health, global health security, and trafficking in persons and wildlife.  The United States expressed support for Vietnam in its development of a national reference laboratory to enhance the Vietnam’s ability to detect emerging disease threats in the region, and the two countries affirmed their strong support for the Global Health Security Agenda to prevent, detect, and respond to infectious disease threats.  The two countries also affirmed their longstanding partnership under the President’s Emergency Plan for AIDS relief.  As a development partner of the Mekong River Commission (MRC) and a founding member of the Lower Mekong Initiative (LMI), the United States reaffirmed its support for cooperation among MRC members, as well as between MRC members and other regional mechanisms, in using, managing, and developing trans-boundary water sources in an effective and sustainable manner.  The United States also affirmed its assistance to Vietnam in combating climate change via concrete mitigation and adaptation measures.

The two leaders heralded the bright future for the enhanced United States-Vietnam Comprehensive Partnership and are committed to making it deeper, more substantive, and more effective to better serve the interests of the two peoples, and to better contribute to peace, stability, cooperation, and development in the Asia-Pacific region and the world.