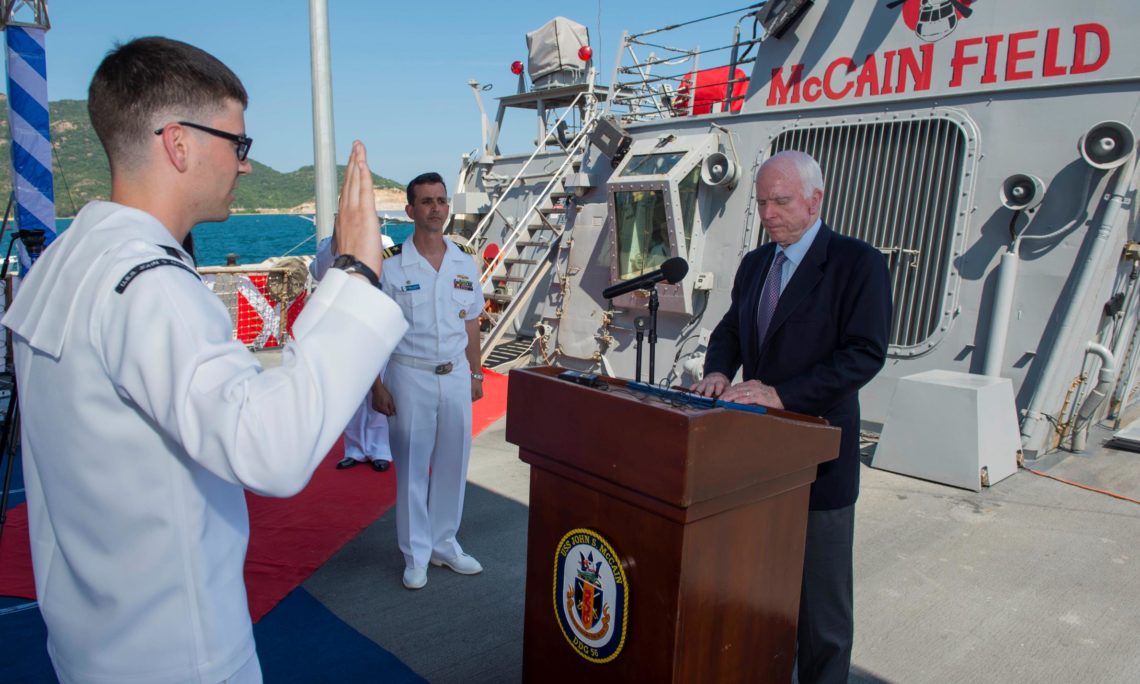 The Senators were piped aboard the ship as they walked through ceremonial sideboys, onto the quarterdeck, where the ship’s commanding officer, Cmdr. Alfredo J. Sanchez, greeted them.

After a brief reception in the ship’s wardroom, guests and crewmembers assembled on the flight deck where McCain and Sanchez both delivered formal remarks.

“I appreciate your service to our country,” said McCain. “People that I represent in Arizona, and that my colleagues represent in their states, and people all over America are grateful that you are here, far away from home, far away from your loved ones, representing the United States of America.”

Sanchez expressed his admiration for the crew’s hard work as well.

“It is a special moment when we can come together and devote the time to recognize the hard work and dedication of my Sailors who are the life and spirit of USS John S. McCain,” said Sanchez. “It is my Sailors’ professionalism and dedication to readiness that gives life to Big Bad John and embody Senator John McCain’s forefathers’ legacy.”

The USS John S. McCain was commissioned in 1994 and named after Sen. McCain’s father, John S. McCain, Jr. and Sen. McCain’s grandfather; John S. McCain, Sr. Both men were highly decorated naval officers who played prolific roles in the Pacific Theater during World War II. The two became the first father-son in naval history to attain the rank of admiral. Sailors refer to the ship as “Big Bad John” in reference to the fighting spirit of the ship’s namesakes.

Following his remarks, McCain re-enlisted the ship’s Sailor of the Year, Electronics Technician 2nd Class Michael Papapietro, from Blackwood, N.J., and promoted three officers to the rank of lieutenant.

“I could not be more honored for Senator McCain to personally reenlist me,” said Papapietro. “It’s quite a feeling to be sworn in by him, especially on the ship named for his family’s legacy.”

Once the ceremonies ended, the distinguished visitors shared lunch with the crew and toured the ship, giving Sailors the opportunity to highlight the various warfighting capabilities and living accommodations aboard.

“I’m glad we are given the opportunity to show off Big Bad John,” said Gunner’s Mate 3rd Class Matthew Burton. “It’s a joy to show off your work and to show pride in what you do and its nice the senators get to see what we are capable of.”

As the tour came to an end, the visitors and crewmembers took a moment to exchange small mementos and snapped a group photo in front of the ship’s 5-inch gun mount.

The USS John S. McCain’s technical stop in Cam Ranh International Port is a strong symbol of the positive trajectory of the U.S.-Vietnam comprehensive partnership.

Since the ship’s commissioning, the USS John S. McCain has played an active role in the Indo-Asia-Pacific. In 2016, the McCain and the submarine tender USS Frank Cable (AS 40) became the first U.S. Navy vessels to visit Cam Ranh International Port since the port opened in March 2016.

The USS John S. McCain, assigned to destroyer squadron (DESRON) 15, is on patrol in support of security and stability in the Indo-Asia-Pacific region.