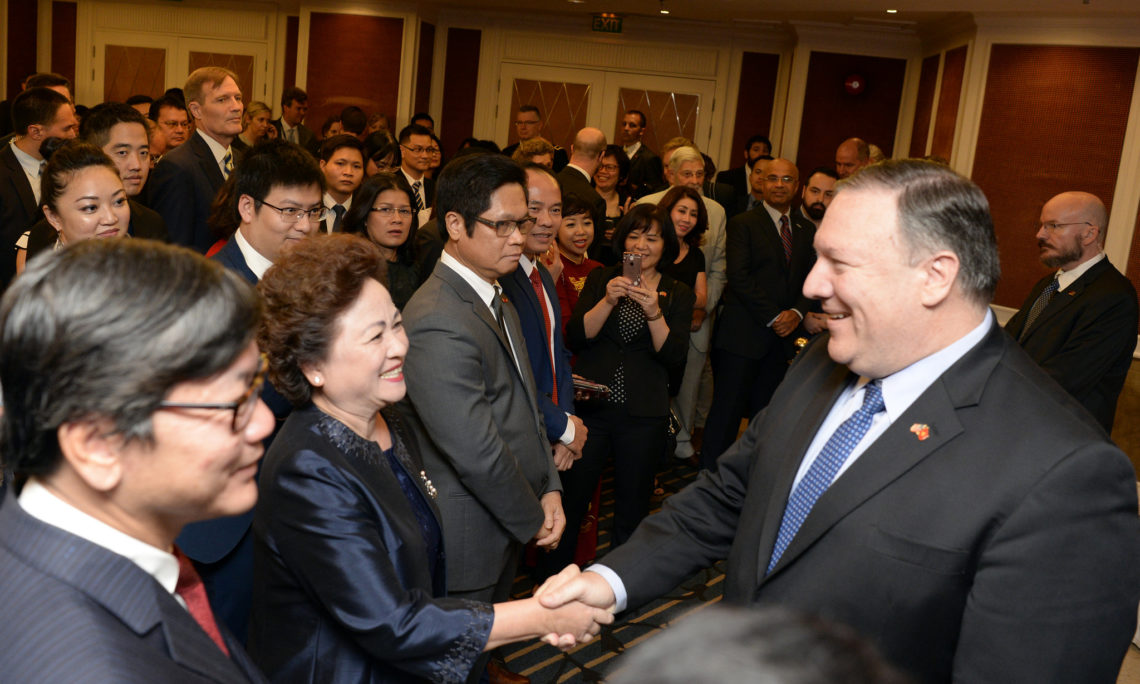 U.S. Secretary of State Michael R. Pompeo at a reception with seventy-five members of the Vietnamese business community on July 8, 2018 in Hanoi, Vietnam.

AMBASSADOR KRITENBRINK: (Applause.) Thank you. Well, good evening, everyone. Delighted to be here. I’m Dan Kritenbrink, the American ambassador to Vietnam, and I am deeply gratified to see heretonight so many friends of the U.S.-Vietnam partnership. This is a very special evening. We are joined by Secretary Pompeo, who is in the midst of an incredibly important worldwide trip. We are exceptionally honored that the Secretary has decided to visit Vietnam and to spend this evening with us.

So I now ask that you please join me in warmly welcoming the Secretary of State of the United States of America, the Honorable Michael Pompeo. (Applause.)

SECRETARY POMPEO: This reminds me of church – come on, the front pews are open. Come on. (Laughter.) It’s great to – I see two of the – they may have my remarks up here, and I’m well known for deviating from them. So if there’s a – if there’s confusion, I’m right and that’s wrong. (Laughter.)

Good evening. Thanks, everyone, for joining me here tonight. It is the case that this is my first trip to Vietnam. It’s the first time as Secretary of State I’ve had the opportunity to come to Southeast Asia, and I very much wanted to come to this country. It is a special place with a rich and deep history. For America, as someone who served in the United States Army, I understand and know the history and am so proud of what our two countries have been able to do together over the last decades.

I want to thank Ambassador Kritenbrink for putting this all together and making this happen tonight. He has also been central in his work to level the playing field for American businesses here. I hope both American and Vietnamese businesses and leaders will keep building this close relationship; it will benefit each of our two countries and your businesses as well. And I understand that Vice Minister Ngoc, our soon-to-be new ambassador, is here as well? Yes? Good to see you again. Thank you. Thank you for joining us tonight. I can’t wait for you to get to Washington. We’ll love to see you there.

You know, I’ve had some time to reflect over the last couple of days on my visit to Vietnam. I was – I was a kid during the Vietnam War. It was all around me growing up. It was every night on TV. We all remember Walter Cronkite telling us the news about what was going on here. I knew a number of families in the community that I grew up in where they had sons and fathers that didn’t come home. It was a difficult time in America’s history and in Vietnam’s history as well.

But look where we are today. It’s truly remarkable. I was just in a meeting with the general secretary and it was amazing to think that I was there as an American secretary. Would someone in the ‘60s or ‘70s have had any hope or believe that the American secretary of state would have great conversations with Vietnam’s top political leaders, where we’ve shared a common vision of how we would move forward together? Would someone back at that time have believed that the American secretary of state would be giving a speech about how we can keep growing our business and economic relationships, our partnership with Vietnam? I think it was unlikely that anyone could have predicted that.

And the fact that we’re having this conversation tonight is a true testament to our nations’ common interests, our mutual respect, our bold resolve, despite great difficulties, to overcome the past and look forward to the future.

I say all of that because it’s important, but I hope that the United States, that one day we can share the same relationship with North Korea. We know it’s a real possibility because we see how Vietnam has traveled this remarkable path. In the early 1980s, Vietnam was in a very [different] condition than it is today: millions had been lost in a series of terrible wars, including, of course, one with the United States. Millions were still looking for reliable supplies of food and shelter. And with the country having endured one conflict after another in previous decades, Vietnam’s political leaders and military leadership constantly worried about the possibility of new conflict as well. And except for relations with a handful of communist nations, Vietnam at that time was isolated from the world.

But this trying time also presented opportunities for Vietnam. The leaders of Vietnam realized their country could reform, it could open up and build relationships, without threatening the country’s sovereignty, its independence, and its form of government. One key to Vietnam’s enormous rise over the past few decades was a new engagement with the United States of America. This began when the U.S. – the United States and Vietnam began working together to repatriate the remains of American service members lost in Vietnam. This small but incredibly meaningful first step eventually helped lead to better ties and formal reestablishment of our relationship in 1995.

This is the same issue that the United States faces today with Chairman Kim, where new ties with America combined with the industriousness of the Vietnamese people and sound leadership has made Vietnam an incredible success story today. It has the fastest-growing economy in all of Southeast Asia. In the past two decades, bilateral trade overall has grown by 8,000 percent. In the last decade alone, U.S. exports to Vietnam have increased by over 300 percent and American companies have poured billions in investment into this country, with great returns. And the Vietnamese people have experienced an extraordinary improvement in their economic wellbeing as well. By global standards, over 60 percent of the Vietnamese people lived under the poverty level in the early ‘90s; today that number is less than 10 percent.

And importantly, the growth between the United States and Vietnam encompasses a great deal – more than just economics, by far. Politically, our engagement with the Vietnamese leaders has reached new heights. Secretary Mattis visited Vietnam in January. Just last month, Deputy Prime Minister Hue visited me at the State Department. And of course, President Trump made his first visit to Vietnam last year.

In the past, we were opponents on the battlefield, but today our security relationship is all about cooperation. Last March, the USS Carl Vinson visited Da Nang, the first U.S. aircraft carrier to visit the country since the end of the war. And following the lifting of the U.S. arms embargo just two years ago, our two militaries are looking at ways to improve our security cooperation even further. The fact that we’re cooperating and not fighting is proof that when a country decides to create a brighter future for itself alongside the United States, we follow through on American promises. And while there are still challenges in our relationship with Vietnam, the fact that we can have honest yet calm discussions when we disagree is an even greater confirmation of the relationship between our two nations.

And finally, look at the consequences of American engagement on the leadership and people of Vietnam. Prosperity and security abound. When the leaders in Hanoi go to bed at night, the notion of conflict with America is the last thing on their minds. Instead, they rest with a certainty that America has no interest in reopening the old wounds of the past. And in light of our red-hot trade relationship and growing security cooperation, nothing could be further from America’s self-interest than picking a fight with Vietnam.

In light of the once-unimaginable prosperity and partnership we have with Vietnam today, I have a message for Chairman Kim Jong-un: President Trump believes your country can replicate this path. It’s yours if you’ll seize the moment. The miracle could be yours; it can be your miracle in North Korea as well.

I want now to shift gears just a bit. I want to state clearly that a free and open Indo-Pacific region is a true priority for the United States of America. As President Trump’s National Security Strategy and his speech at APEC last November in Da Nang have made clear, the United States is dedicated to an Indo-Pacific region with strong, independent nations who respect each other’s sovereignty, uphold the rule of law, and advance responsible commerce. We hope these principles will guide governments and businesses of the Indo-Pacific region as they make the choice about their partners. We hope they will see that the United States’ actions are not guided by raw economic self-interest alone, in contrast with others in the region. The United States seeks partnerships in the region built on the values of respect, fairness, and the rule of law.

A free and open Indo-Pacific is vital to the continued growth of commerce between our two nations. During President Trump’s meeting with President Quang last November, our two leaders pledged to deepen our trade and economic relationship. We’ll continue to do this. We will promote free, fair, and reciprocal trade and investment in priority areas. This includes digital trade, intellectual property rights enforcement, automobiles, electronic payments, and agricultural goods. Across the board, we’ll press for open, transparent, and competitive markets and trade and investment opportunities for American companies.

President Trump has also emphasized to Vietnam the importance of reducing our trade imbalance. We need to resolve these issues that impede American companies’ access to markets here in Vietnam. I hope to hear your ideas tonight and talk to many of you about how we can make progress on eliminating those barriers to American goods so that each of our two countries will be better off.

We are committed to continuing to work for a strong, prosperous, and independent Vietnam, one that engages in fair and reciprocal trade. And even as we focus on the future, we will both cooperate on resolving past conflict. This includes collaboration to provide a full accounting for all missing personnel and to remediate the lingering impact of dioxin in this country.

I’m looking forward to tonight. I’ve been looking forward to it for a number of days since Dan told me we had successfully put it together. We’ll have good conversations about how we can all grow our mutual prosperity. With your help, the Americans and Vietnamese in this room, we can make sure that Vietnam continues to be a model for aspiring nations, no matter where they are in their journey towards a brighter future. Thank you again so much for your warm welcome and for being with me tonight. I look forward to (inaudible). Thank you. (Applause.)