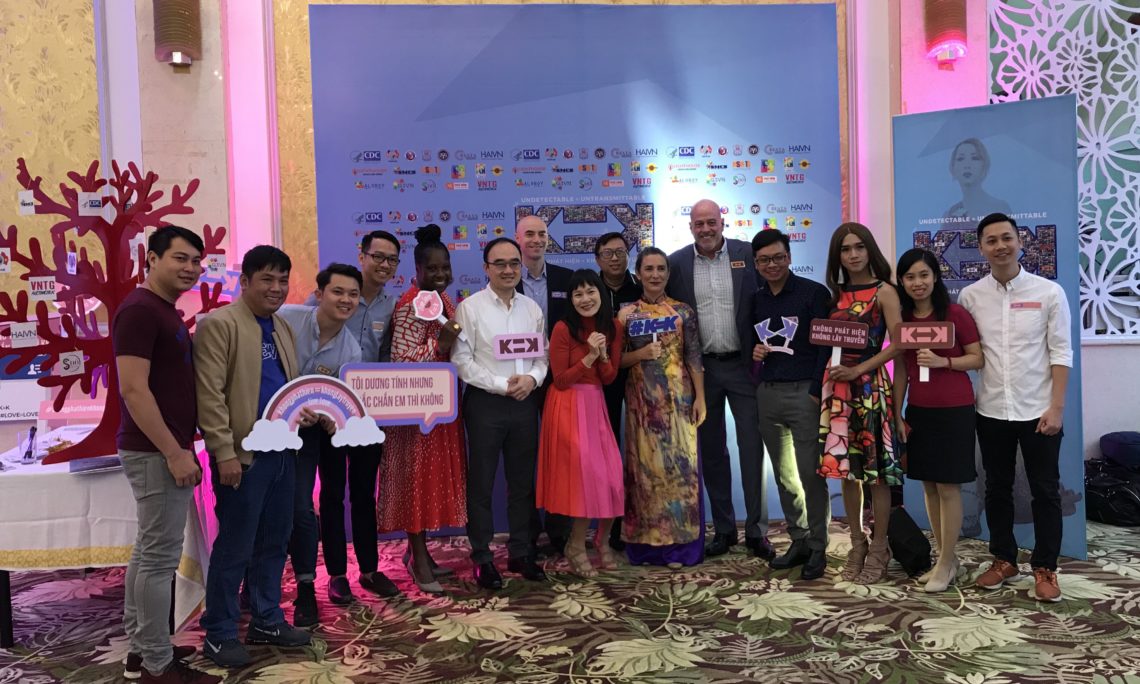 HANOI, November 28, 2018 – As part of World AIDS Day recognition events, community organizations from across the country convened to share results of U=U projects funded by Hanoi Medical University with the support of the U.S. Centers for Disease Control and Prevention (CDC) in Vietnam and the United States President’s Emergency Plan for AIDS Relief (PEPFAR) on November 28 in Hanoi. U=U, Undetectable=Untransmittable or K=K (Không phát hiện = Không lây truyền), is a global community-driven movement based on research demonstrating that persons living with HIV on successful treatment with undetectable levels of virus cannot transmit HIV to sex partners. The message has been transformative for both people living with HIV and partners, many of whom have experienced fear and stigma related to transmission, and Vietnam has emerged as an early leader in disseminating this message. Dr. John Blandford, Country Director of CDC in Vietnam, stated, “We’ve long known that with effective treatment people living with HIV can live full, healthy productive lives. We now know—conclusively—that daily adherence to this therapy means that HIV cannot be transmitted to sexual partners. This is joyful, life-altering information for persons with HIV, their sexual partners, and their families.”

Ten community organizations were awarded seed grants of $1,000 to promote the message to the key populations they serve, including men who have sex with men, transgender women, and sex workers. With over 100 stakeholders in attendance, the Hanoi event was an opportunity for grantees to share dissemination strategies and outcomes as well as build relationships with other prominent HIV advocacy groups, like Hanoi’s Lighthouse Social Enterprise and Vietnam Network of People Living with HIV (VNP+). Many grantees, such as Alo Boy (Ho Chi Minh City) and Youth Connect (Binh Duong), leveraged social media by creating YouTube videos or Facebook pages. In total, 131 social media posts and messages were liked 81,524 times and shared 7,521 times.

This event was also the first public viewing of a U=U media toolkit funded by The Partnership for Health Advancement in Vietnam (HAIVN) through CDC-PEPFAR. Community input to achieve maximum impact was critical to developing the final media products, including logos, still images, and the slogan, “I am positive. S/he will never be.” The media toolkit will be used to promote the message widely, including in public fora and community settings, in healthcare facilities, and on social media.

The U=U dissemination event is part of CDC and PEPFAR’s broader objectives of community engagement through strengthening academic-community partnerships and reducing HIV stigma and discrimination. Work on improving awareness of the U=U message among healthcare workers is ongoing, as is integrative HIV prevention and sexual health promotion messaging. Said Dr. Blandford: “The greatest stigma faced by persons living with HIV has been the perception that an HIV infection suggested you were a threat to your sexual partners. With the U=U science and daily effective treatment, this perceived threat—and the devastating stigma surrounding it—can be decisively put to rest.”