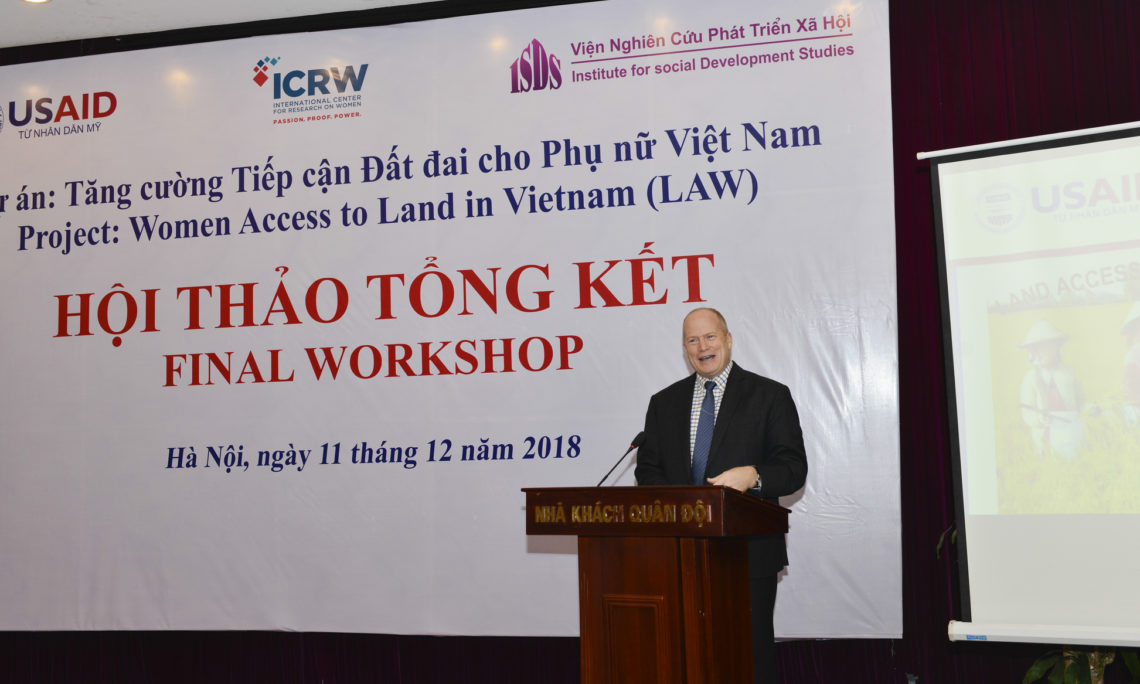 HANOI, December 11, 2018 — Today, the United States Agency for International Development (USAID) and the Institute for Social Development Studies (ISDS) hosted an event to mark the completion of the USAID Land Access for Women (LAW) project. The International Center for Research on Women and ISDS implemented this project from 2014 to 2018.

While a legal framework for women’s land ownership in Vietnam exists, it is often hindered by both men’s and women’s general lack of awareness of Vietnam’s property rights laws and lack of resources to enforce women’s property rights at the provincial level. As a result, women’s access to land rights was limited. To address this, the USAID LAW project combined commune-level legal rights counseling and education with advocacy efforts to empower farmers, especially women, to exercise their rights to land. The project worked with mass organizations and 106 Community Volunteers for Gender Equality Advocacy (CVGEA) in eight communes (Duong Quang, Long Son, Nhan Hoa, Tan An, Hau Thanh Dong, Nhat Quang, Nhon Ninh, and Phan Sao Nam) of Hung Yen and Long An Provinces.

Over the four years of the project, Community Volunteers conducted land rights awareness-raising activities as well as provided legal counseling to individuals, mitigated land disputes, and offered referrals to navigate the existing legal structures. By the end of September 2018, Community Volunteers advised nearly 12,000 clients on land rights issues, resulting in more than 3,300 resolved land-related cases, of which approximately 95 percent were in favor of the clients. Because of these efforts, more women were able to inherit land and were listed on the Land Use Rights Certificates. Both men and women who participated in the project showed changed attitudes about women’s equal access to social, political, and economic resources and opportunities.

For more information on the project, visit: https://goo.gl/VC73ft

To view photos of the event, visit: https://flic.kr/s/aHsmxgh5gF