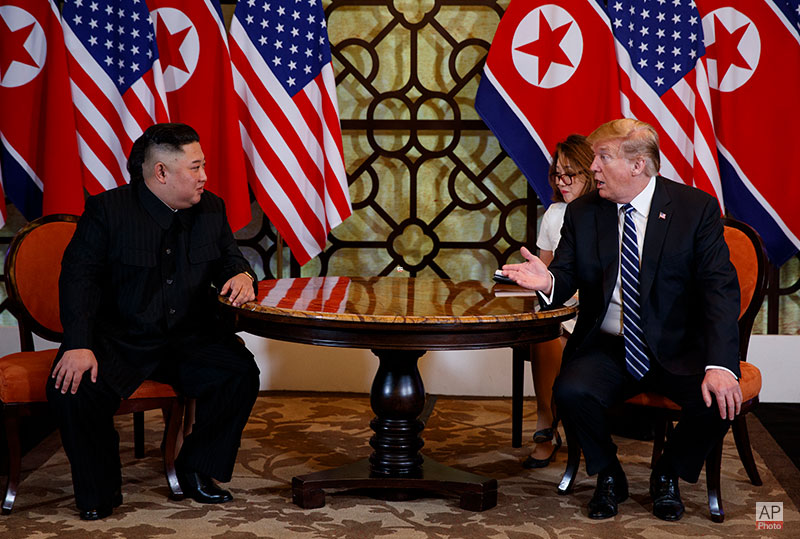 President Trump and Chairman Kim Jong Un of the DPRK Before 1:1 Bilateral Meeting

Office of the Press Secretary
FOR IMMEDIATE RELEASE

REMARKS BY PRESIDENT TRUMP AND CHAIRMAN KIM JONG UN OF THE STATE AFFAIRS COMMISSION OF THE DEMOCRATIC PEOPLE’S REPUBLIC OF KOREA BEFORE 1:1 BILATERAL MEETING

CHAIRMAN KIM:  (As interpreted.)  And I believe that, starting from yesterday, the whole world is looking at this spot right now.  Because there are people who are welcoming this meeting.  There are people who have remained skeptical about this meeting.  But I’m sure that all of them would be watching the moment that we’re sitting together, side by side, as if they’re watching a fantasy movie.

So we have made a lot of efforts so far, and we thought that now it’s time for us to come to Hanoi, sit together, and then have this wonderful dialogue.

And let me assure you that I will do all my best to bring a good result, ultimately, today.  Thank you.

PRESIDENT TRUMP:  Well, thank you very much, Chairman Kim.  And it’s great to be with you again, and I’m sure, over the years, we’ll be together a lot.  And I think we’ll also be together after the fact — meaning after the deal is made.

We had very good discussions last night at dinner, and the pre-dinner was very good.  And we have a lot of great ideas being thrown about.  I think, very importantly, the relationship is, you know, just very strong.  And when you have a good relationship, a lot of good things happen.

So I can’t speak necessarily for today, but I can say that this — a little bit longer term and over a period of time, I know we’re going to have a fantastic success with respect to Chairman Kim and North Korea.  They’re going to have an economic powerhouse.  I’ve been writing about it; I’ve been talking about it.  I think it’s going to be an economic powerhouse, and it’s something I very much look forward to helping with, because with a little bit of help — in the right location, in the right place —  I think it’s going to be something very special.

And, again, I am in no rush.  We don’t want the testing, and we’ve developed something very special with respect to that.

Would you like to say something?  I’m finished, yeah.

Thank you all very much.

Q    Chairman Kim, are you confident?

CHAIRMAN KIM:  (As interpreted.)  Well, it’s too early to tell.  But I wouldn’t say that I’m pessimistic.  From what I feel right now, I do have a feeling that good results will come out.