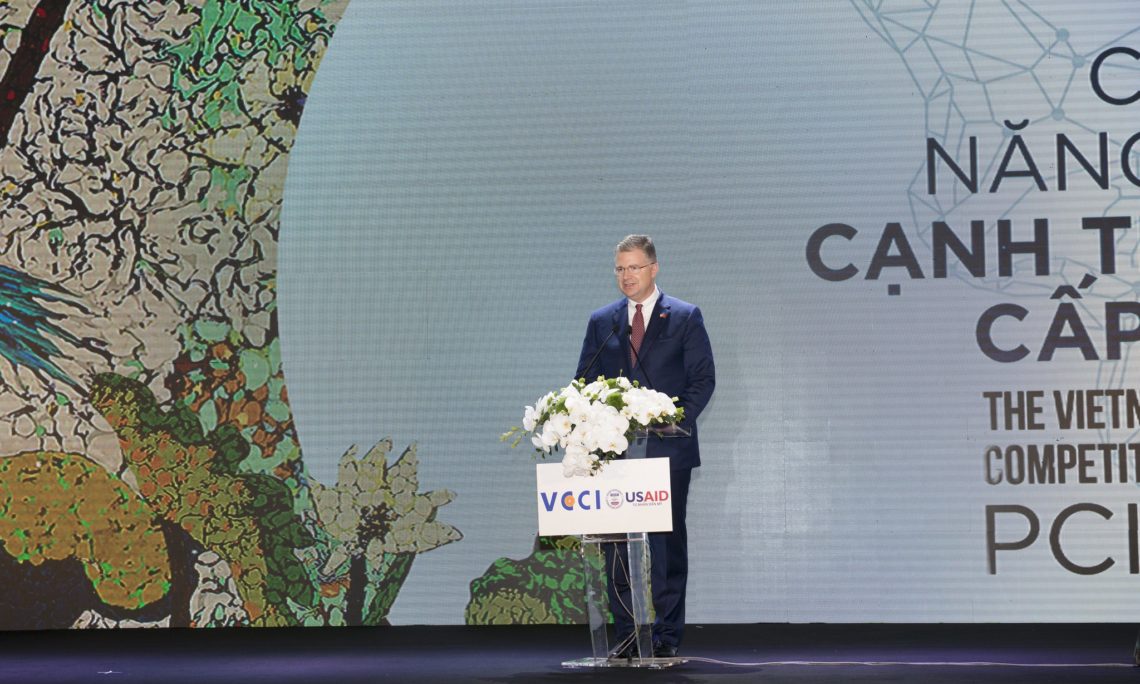 I am delighted to be here with you this morning at the launch of 2018 Provincial Competitiveness Index Report. It is an honor to be here again and be your partner in this very important launch.

There’s a lot of good news in this year’s report and I would like to highlight three main findings.

First – PCI scores are continuing to improve. In 2018, the PCI index for core survey questions reached an all-time high since we began this exercise in 2005. In fact, all but one of Vietnam’s 63 provinces have advanced over the years that we’ve been tracking this index. Also, the gap between the best and the worst performers among the provinces in both the annual PCI and core PCI rankings has continued to narrow.

Second – Informal charges are declining: Those surveyed reported fewer experiences and instances of grand and petty corruption. For example, about 39 percent of firms in the PCI survey indicated that they paid informal charges to inspectors and examiners compared with 52 percent in 2017. Foreign firms indicated as well that informal payments related to land transactions dropped from about 18 percent to 7 percent this year. In addition, the percentage of firms that believe that there was favoritism of provincial authorities towards state corporations declined from 41 percent in 2017 to 32 percent in 2018.

Third – Infrastructure quality is improving: Firms believe that infrastructure in Vietnam is continuing to improve, a trend that has held steady since 2014. The median score of the infrastructure index component reached a new record high in 2018, which is great news. Foreign investors widely acknowledge improvements in electricity provision and connectivity between highways, ports, and railroads.

I would also like to congratulate the top performers among the provinces this year: Quảng Ninh, Đồng Tháp, and Long An.
Finally and most importantly, as the American Ambassador to Vietnam, I am delighted to announce today that the United States, courtesy of our great colleagues at the U.S. Agency for International Development (USAID), will be renewing the PCI program for another three years. I would also like to thank VCCI and Dr. Lộc for being such fantastic partners. We truly are your partner in this very important endeavor and again I’m very grateful to be here with you.

Thank you for participating today in the PCI launch and for your commitment to economic reforms. We think that the policies you are carrying out at the local level encourage robust investment, trade, and economic growth.

And again, as we often say – the United States is proud to be your partner. We are invested in Vietnam’s success. We are committed to the development of a strong, prosperous, and independent Vietnam and we think that PCI plays an important role in your success.

Thank you so much.