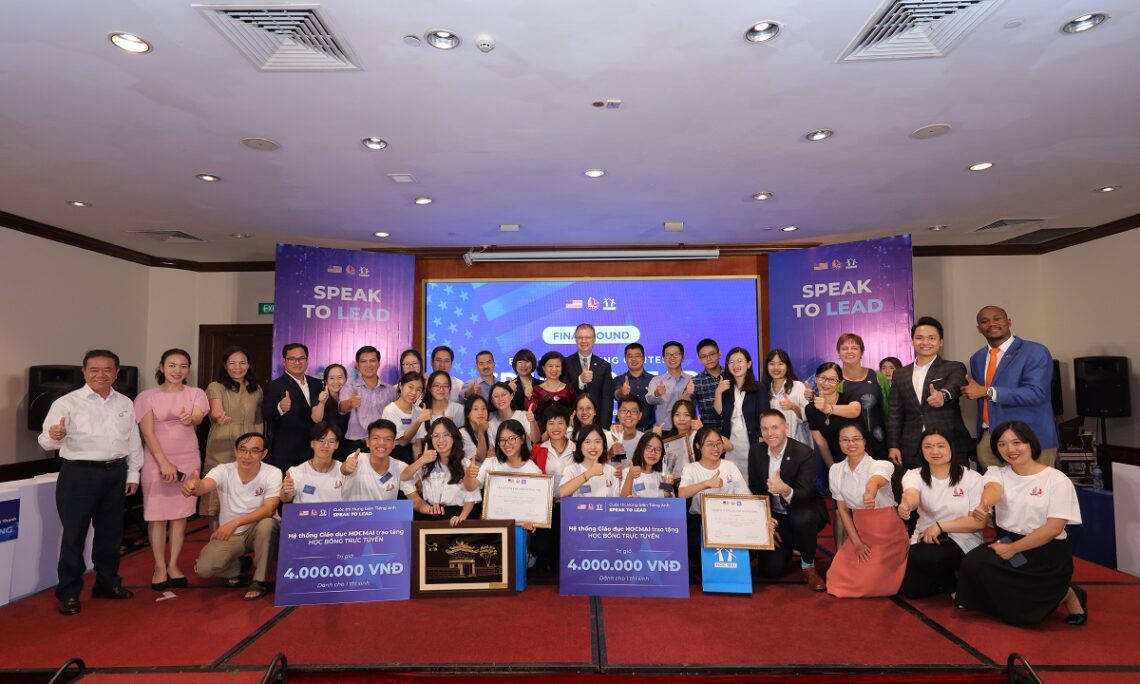 U.S. Ambassador Kritenbrink in a group photo with organizers, contestants and judges

On October 8, U.S. Ambassador Daniel Kritenbrink honored the accomplishments of 15 students during the final round of the “Speak to Lead” English contest, part of our celebration of the 25th anniversary of U.S.-Vietnam relations.  Five high school teams demonstrated their English skills by giving speeches on the important role of Vietnam’s youth in furthering the U.S.-Vietnam partnership.  This nationwide English-speaking competition was jointly organized by the U.S. Embassy and Hocmai Education, Inc.  Nineteen gifted high schools competed in two preliminary rounds, and on October 8, five teams from Cao Bằng, Lạng Sơn, Lai Châu, Đắk Nông, and An Giang competed in the final round at the Fortuna Hotel in Hanoi.

Ambassador Kritenbrink welcomed participating teams and congratulated them for advancing to the final round of the competition, which he considered an achievement in and of itself.  He emphasized that all of the teams were already winners and represented Vietnam’s boundless talent and potential.

“As I look across the room today, I see tremendous talent, drive, and ambition.  All of you have gone above and beyond in succeeding in the preliminary rounds of this competition, and are the faces of Vietnam’s bright and promising future … In your dynamism, talent, drive, and aspiration, Vietnam has everything it needs to thrive and succeed,” stated Ambassador Kritenbrink.

Competing teams from gifted high schools across Vietnam focused on what the 25th anniversary of U.S.-Vietnam diplomatic relations meant to them personally, while addressing different facets of the U.S.-Vietnam bilateral partnership such as trade, cultural exchanges, the environment, science and technology, and education.

While all the teams impressed the judges with their informative and passionate presentations, An Giang team was selected as the winner of the final round while Lạng Sơn and Cao Bằng teams were selected as the 1st and 2nd runners-up, respectively.

Ambassador Kritenbrink presented certificates and prizes to contestants at the event’s conclusion.  This celebratory event highlighted the close friendship and strong people-to-people ties between the United States and Vietnam.