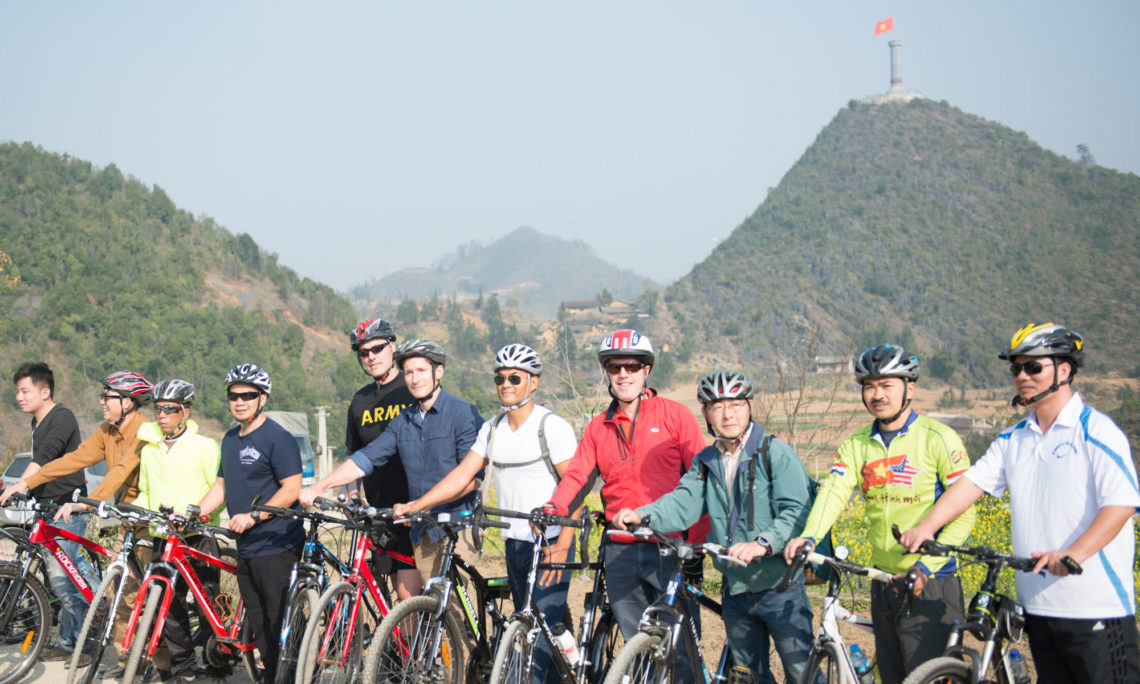 The U.S. Embassy delegation bikes from Cot Co Lung Cu to a nearby Lo Lo village

During the first stop in Ha Giang, Ambassador visited Hoang Su Phi district to meet with local leaders and learn about the local economy, including an organic tea processing facility. In addition, the delegation toured Pan Hou Village Ecolodge to learn more about eco-friendly tourism in the area.

Ambassador Osius, along with local and provincial representatives, inaugurated the Pho Bang Primary School, which hosts a new three-story building with eight classrooms and two meeting rooms and was the 20th school in Vietnam constructed with funding from the U.S. Pacific Command’s Overseas Humanitarian Disaster Assistance and Civic Action Program. In addition to inaugurating the Pho Bang Primary School, Ambassador Osius presented new bunk beds and bedding, lunch room trays, and gift bags to over 300 students of Sung La Primary School on behalf of the U.S. Embassy community and private donors, while visiting Dong Van District.

“These children are the future leaders of Vietnam and the world, and the people of the United States are delighted to share these gifts with Sung La in honor of our enduring friendship,” noted Ambassador Osius while in Dong Van.

Ambassador Osius also kicked off the last section of his bicycle journey through Ha Giang at Ma Pi Leng Pass, considered the King of Passes and one of the most beautiful sites in the region. Following his visit to Ma Pi Leng, the Ambassador, joined by a group of local students, biked to Meo Vac, where he and the students discussed their career goals and the importance of education.

To conclude his visit to Ha Giang, Ambassador Osius visited the Thanh Tam Parish Catholic Church in Ha Giang City to learn about religious life in the province. The church, which was built in 2012, performs religious services and holds regular masses for local residents.