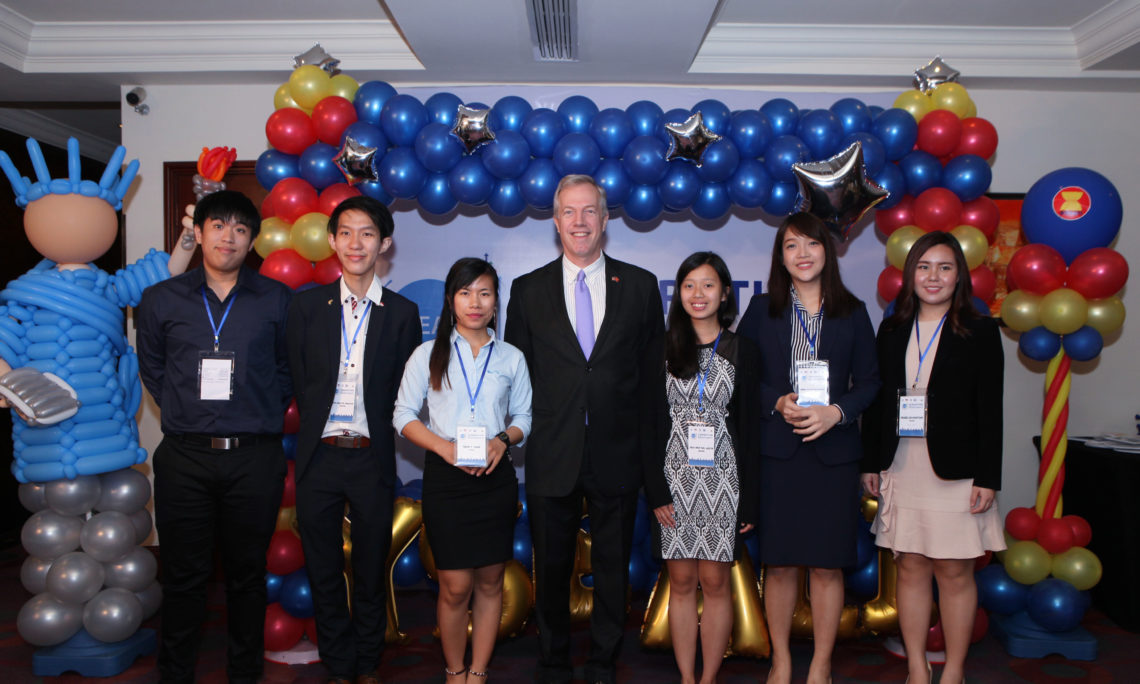 Thank you to the Ambassadors of all the ASEAN member countries for joining us this morning and taking the time to meet with the young delegates from your respective countries.
Thank you also to the Kenan Foundation Asia and the Center for Sustainable Development Studies (CSDS) for all your hard work in making this workshop possible.

Most important, I want to congratulate the 80 YSEALI participants who are here today. You were selected from over 2,200 applications that were submitted from throughout the region. That is an accomplishment in itself, but I believe that you will accomplish so much more in the next four days. I know that the slogan for this YSEALI Generation: ECommunity workshop is “The future starts now.”  But I also believe that the future is you. There are nearly 410 million people under the age of 35 in the ASEAN region.

You are the ones who are going to shape policy in your countries and the region in the future; the ones who are going to drive the economy; and promote positive change for a more prosperous and inclusive society. You were chosen to be here because you already know this and are committed to being part of that future. The U.S. Embassy in Hanoi is proud to host this workshop during two important anniversaries. The first is ASEAN’s 50th year since establishment. The United States congratulates ASEAN and its ten member states on this important milestone. The second anniversary is 40 years of partnership between the U.S. and ASEAN.

As Vice President Mike Pence said at his meeting with the ASEAN Secretariat earlier this year “Our relationship without a doubt has benefited both ASEAN and America — diplomatically, economically, and from the standpoint of national security.” This week you will focus on the economic importance of ASEAN and the role that the ASEAN Economic Community is playing.

The ASEAN region is the United States 4th largest trading partner. It is also the number one destination for U.S. foreign direct investment in Asia. We share the same goals as the ASEAN Economic Community and want to see it succeed. At the same time, we recognize the challenges it faces given the diversity among the member states in terms of markets, infrastructures and income levels. We hope that you, your generation, will be part of the solution to help strengthen the AEC and make ASEAN even more relevant on the world stage.

The U.S. Government is very committed to partnering with young people like you to address shared problems and build a better future in the ASEAN region and beyond.  And that is why we created the Young Southeast Asian Leaders Initiative, known as YSEALI.  We believe in the power of young people to lead, innovate, and work together to tackle tough issues. The fact that YSEALI now has over 110,000 members, and growing, is a testament to how willing young people are to getting involved, to connecting and taking action.

At the end of this workshop, I expect all of you to have a better understanding of the ASEAN Economic Community. I also encourage you to take this experience back home with you, where you can begin to engage with government, business leaders, community organizations, or youth groups to advance economic and social development at the community, national, and regional level.