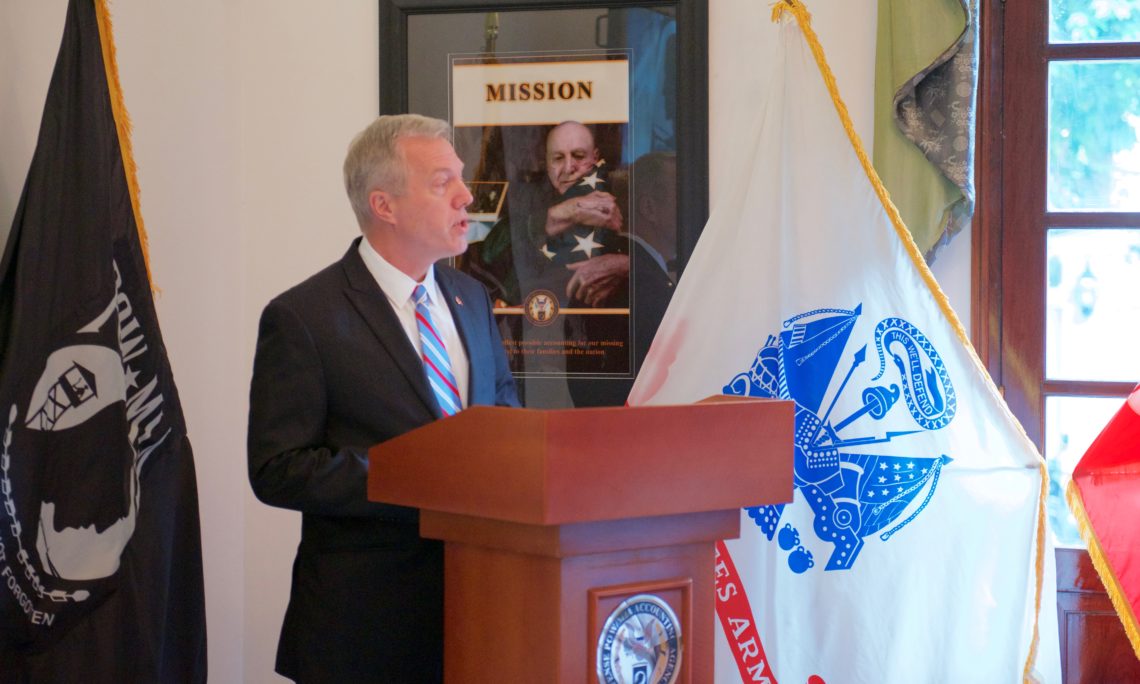 I am honored to be with you on National POW/MIA Recognition Day, an annual event during which Americans pause to reflect on the sacrifices of service members who not only gave their lives for their country, but who have yet to return home.

The black and white POW/MIA flag, one of the most recognizable symbols of our generation, will fly over our national and state capitals today as a reminder of the high cost of freedom.

This flag stands for the sacrifices of those who protected our way of life and their loved ones who awaited their return; the people: fathers, mothers, brothers, sisters, sons, and daughters of the United States of America.

Remembering our past warriors is not enough.

We must also make every attempt to return their remains to their families, who have waited with such faithful anticipation these many years.

The United States remains committed to achieving the fullest possible accounting for our missing and that effort is evident here in Vietnam and elsewhere.

Our effort to recover our missing from the Vietnam War, and from other conflicts, is unprecedented.

Other countries, such as South Korea, Japan, and even Vietnam are now trying themselves to account for those whom they lost.

The creed of a professional warrior is to leave no one behind.

Here, it has led to sincere cooperation among two former enemies.

Indeed it is the foundation upon which our new relationship was built.

We recognize the unstinting support of the Vietnamese government and people and we are grateful for their efforts.

I have visited recovery sites and attended repatriation ceremonies.

On the steep hills of Kon Tum, I saw the dedication and cooperation of American and Vietnamese teams: men and women working hard, in some of the harshest conditions imaginable, to return our fallen.

Earlier this month I was in Danang City with DPAA personnel to participate in an end-of-mission forensic examination.

I was proud to see military and civilian professionals from both countries conducting the scientific procedures necessary to repatriate remains believed to be those of an American service member missing from the war.

At a repatriation ceremony this year in Hanoi, I watched as the honor guard yet again escorted flag-draped coffins onto a C-17 aircraft for their long trip home.

I felt both for the loss of our bright young military members so many years ago, but also a sense of pride at America’s commitment to bring home our fallen with honor.

As we prepare for the formal portion of today’s ceremony, please reflect on the special sacrifices the missing have made for their country, as well as the sacred duty of our nation to those who truly gave their last full measure of devotion to preserve our nation’s freedoms.

Thank you for being here today.