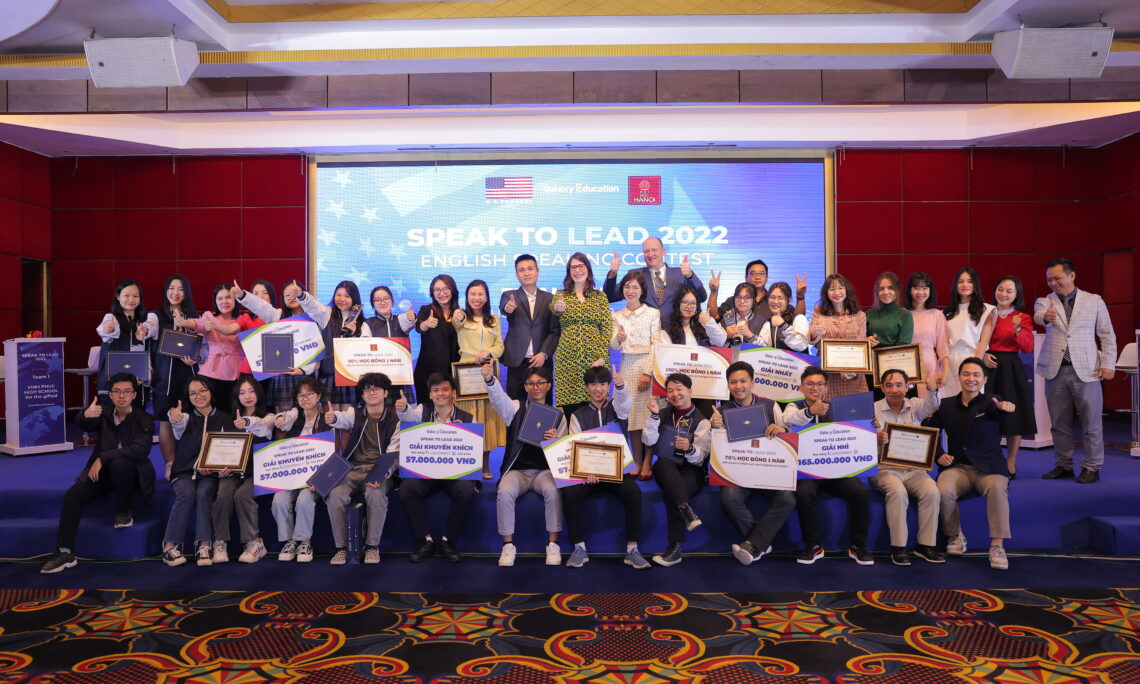 HANOI, January 13, 2023– Deputy Chief of the U.S. Mission to Vietnam (DCM) Melissa Bishop praised the potential of Vietnamese youth to serve as a positive force in their country and the region at the final round of the Speak to Lead English Speaking competition on January 12, 2023. The U.S. Embassy in Hanoi organized this nationwide English-speaking competition in conjunction with Hanoi University and Galaxy Education Joint Stock.

Eighty teams from 39 provinces competed in two virtual preliminary rounds, which focused on workforce readiness, social inclusion, economic growth, STEM development, and innovation. The top six teams of 18 students from Vĩnh Phúc, Thái Bình, Hà Tĩnh, Nghệ An, An Giang and Phú Yên then competed in the final in-person round in Hanoi.

Throughout the competition, high school students demonstrated their English knowledge and public speaking skills through presentations on the role of education in addressing social issues and furthering youth empowerment in Vietnam.

Speaking at the opening ceremony of the final round, DCM Bishop congratulated the teams for advancing to the final round of the competition, which she considered a significant achievement given the talent of the competing teams.  She emphasized that all of the teams were already winners as they are an excellent example of Vietnam’s potential.

“I hope the practical experience you have received from this competition will inspire you to continue enhancing your English-language skills and to deepen your knowledge about the powerful role education plays in today’s world.  You are all bright young leaders who I know will successfully contribute to your communities and help strengthen the bilateral relationship between the United States and Vietnam, which, this year, is celebrating the 10-year anniversary of our comprehensive partnership. English language cooperation plays a key role in that partnership.” stated DCM Bishop.