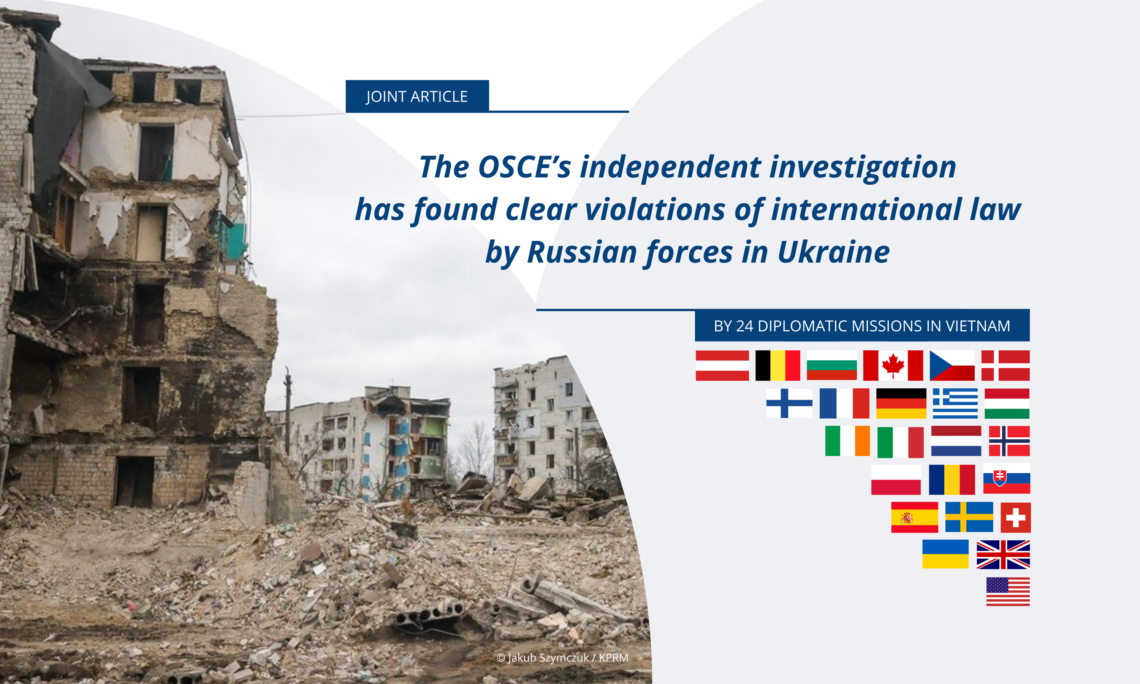 The OSCE’s independent investigation has found clear violations of international law by Russian forces in Ukraine.

The role of the Organization for Security and Co-operation in Europe (OSCE) may not be well known in Vietnam, but it is very important internationally. It is an inter-governmental organization with 57 participating countries which was instrumental in bringing an end to the Cold War, and has contributed to conflict prevention since then. Russia and Ukraine are members of the OSCE, as are all of the countries jointly authoring this article. Following Russia’s invasion of Ukraine two months ago, the membership of the OSCE asked for an investigation of international humanitarian law and human rights violations and abuses, conducted by independent experts under the OSCE’s Moscow Mechanism. The initial report, which was the result of a three-week-long fact-finding mission by the three OSCE experts, has been recently published, and it has found multiple instances of clear violations of international law by Russian forces in Ukraine, including credible evidence of war crimes.

What sort of violations and crimes does the report talk about? The independent experts found clear patterns of international humanitarian law violations by Russian forces which have led to high numbers of civilian deaths and injuries. They documented credible evidence of violations of the right to life, freedom from torture and other inhuman and degrading treatments and punishment. They also found evidence of humanitarian convoys and healthcare facilities being attacked, and of arbitrary arrests and extrajudicial killings. The experts found that Russia is failing to agree to an evacuation of civilians, or is violating such agreements through attacks on those trying to leave. Intentionally using starvation of civilians as a method of warfare by depriving them of objects indispensable to their survival constitutes a war crime.

The OSCE independent experts received several credible reports according to which Russian forces arrested civilians, including journalists, without any procedure, and ill-treated them by methods that amount to torture. This also constitutes a war crime. The conflict has particularly negative effects on individuals belonging to vulnerable groups, including women, children, the elderly, and persons with disabilities. The OSCE independent experts found multiple instances of conflict-related gender-based violence, such as rape, sexual violence or sexual harassment. Women have also been exposed to an increased risk of human trafficking and have faced difficulties when seeking to access gender-specific healthcare. The credibility of the OSCE report is strengthened by the fact that it does not refrain from shedding light on violations of the Ukrainian side, although they are in no way comparable in scope to those committed by Russia. This independent expert report by the OSCE helps expose the truth of Putin’s illegal war in Ukraine. It has found credible evidence of war crimes committed in Ukraine that are an affront to humanity and that should shame Russia and President Putin. We call on countries outside Europe, including Vietnam, to raise their voices about human rights law and international humanitarian law violations by Russia, and reject its attempts to use force to redraw the map of Europe.