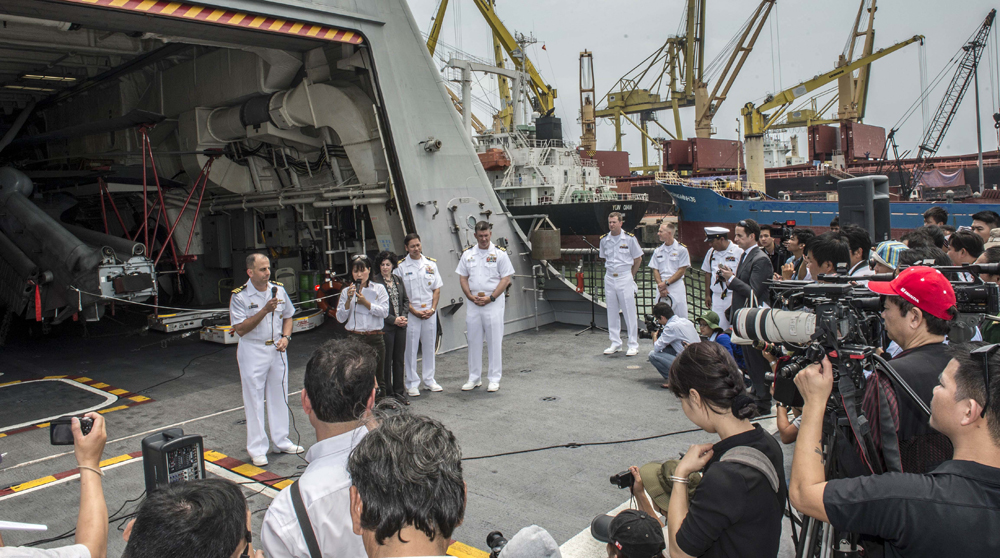 The U.S. Navy began the sixth annual Naval Engagement Activity (NEA) with the Vietnamese People’s Navy on Monday, April 6, as both nations celebrate the 20th anniversary of the normalization of diplomatic relations in 2015.

The Naval Engagement Activity is being supported by the U.S. Embassy in Hanoi and the U.S. Consulate General in Ho Chi Minh City. Both U.S. Ambassador to Vietnam Ted Osius and Consul General Rena Bitter are attending the NEA in Da Nang.

The NEA evolved from annual port visits to Da Nang by U.S. Navy ships that began more than a decade ago. The guided-missile destroyer USS Curtis Wilbur (DDG 54) was the first U.S. Navy ship to visit Da Nang on July 28, 2004.

This year’s NEA continues the tradition with another guided-missile destroyer, USS Fitzgerald (DDG 62), as well as the littoral combat ship USS Fort Worth (LCS 3). The officer in charge of these ships is Capt. H.B. Le, deputy commander, Destroyer Squadron (DESRON) 7. A Vietnamese-American, Le commanded the guided-missile destroyer USS Lassen (DDG 82) when it visited Da Nang in November 2009.

Marking the 20th anniversary of the normalization of diplomatic relations between the United States and Vietnam, these activities are designed to foster mutual understanding, build confidence in the maritime domain, and develop relationships between the people and navies of both nations.

“The Naval Engagement Activity is an exciting part of the 20th anniversary,” commented Consul General Bitter. “It is an important anniversary and we have a lot to celebrate. Significant groundwork was laid in 2013 when Presidents Sang and Obama agreed to a Comprehensive Partnership, identifying areas of cooperation. Our 20th anniversary celebrations have and will continue to highlight this cooperation.”