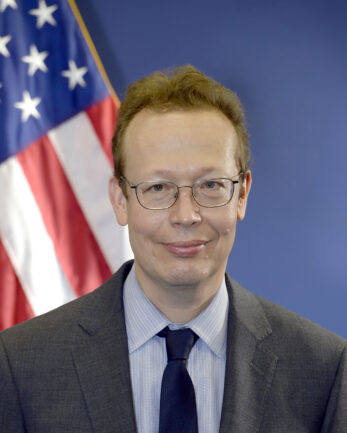 Christopher Klein is the Chargé d’Affaires, a.i. of U.S. Embassy Hanoi.  He entered the Foreign Service in 1998.  He served as Deputy Executive Secretary in the State Department from 2017-2019.  His previous Washington assignments included Deputy Director of the Office of China and Mongolia Affairs and Special Assistant in the Bureau of East Asia-Pacific Affairs.  He served twice at the U.S. Mission to the United Nations in New York – first as Staff Assistant and Political Officer early in his career, then as Political Minister-Counselor from 2013-2017.  His overseas assignments included the U.S. Embassies in Paris, Baghdad, Beijing, and Ashgabat, Turkmenistan.  Prior to joining the Foreign Service, he was a journalist; his work appeared in The Moscow Times, New York Newsday, and The National Law Journal.  He graduated from San Francisco State University and the National War College.