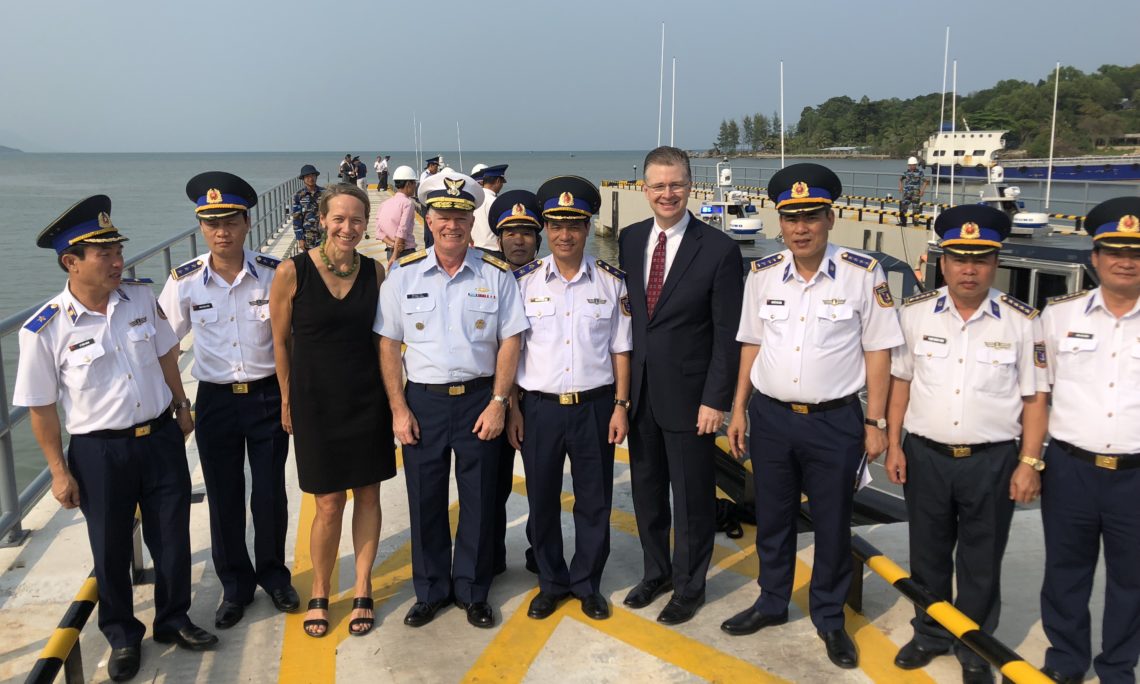 HANOI, March 29, 2018 — The bilateral partnership between the United States and Vietnam continues to reach new heights—with the back-to-back U.S. presidential visits to Vietnam from President Obama in 2016 and President Trump in 2017, a visit by the top U.S. defense official, Secretary of Defense James Mattis in January 2018, the historic U.S. Navy aircraft carrier—USS Carl Vinson—visit at the beginning of this month, and now the inaugural visit of Vice Admiral Fred M. Midgette, commander for all U.S. Coast Guard missions within half of the world that ranges from the waterways within the Rocky Mountains in North America to the waters off the East Coast of Africa.

Vice Admiral Midgette’s visit coincides with the handover of support facilities and equipment at the Coast Guard Region 4 from the United States to Vietnam. This official transfer at Region 4 Station on Phu Quoc Island, the farthest southwestern territory of Vietnam, is another significant milestone in the bolstering partnership between the U.S. and Vietnam and demonstrates U.S. support for a strong, prosperous, and independent Vietnam that contributes to international security and the rule of law. This transfer comprises 20 million dollars’ worth of infrastructure and equipment including a training center, a maintenance facility, a boat lift, vehicles, a navigation simulator, and six brand-new fast-response Metal Shark boats—capable of reaching up to 50 knots.

U.S. Ambassador to Vietnam, Dan Kritenbrink said, “This fall, we plan to break ground on the Region 3 facility in Vung Tau” and hailed that this is “a truly exciting moment” in the fruitful U.S.–Vietnam partnership.

The current regional and global challenges include smuggling, illicit trafficking, piracy and armed robbery on the high seas, illegal, unregulated and unreported fishing, environmental degradation, and many others. The Region 4 Metal Shark boats will serve to deter bad actors from committing crimes against or near Vietnam.