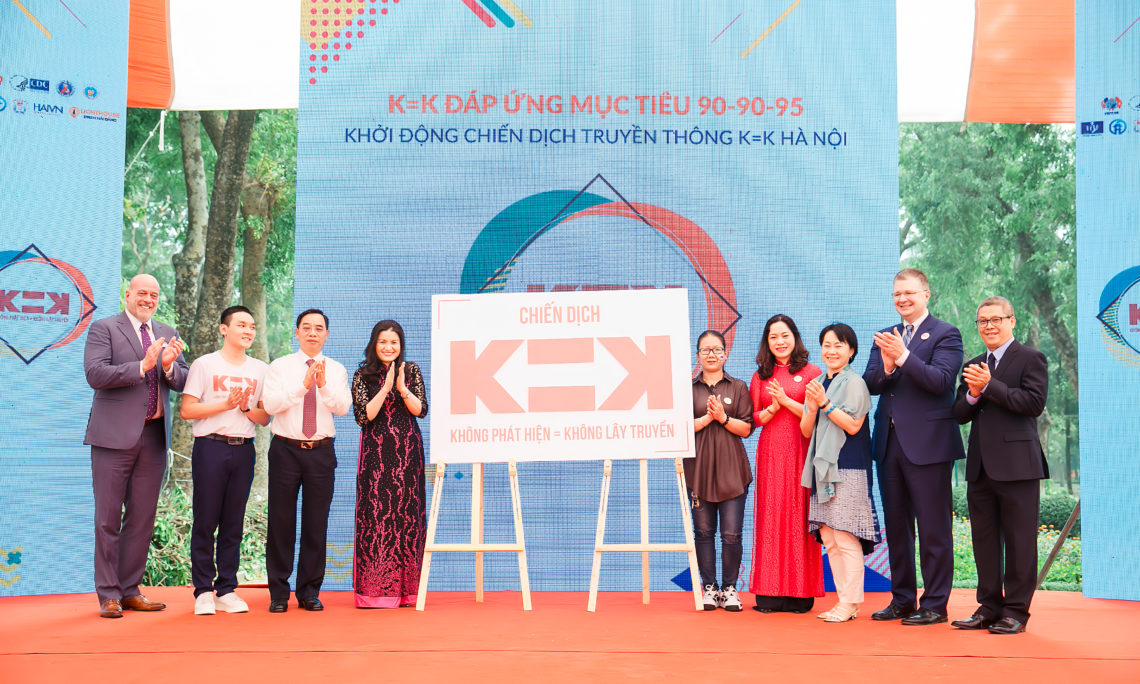 At the launch event, the Hanoi Department of Health and the Hanoi CDC announced the K=K campaign to help meet municipal 90-90-95 epidemic control targets in 2019 (meaning, 90% of all people living with HIV will know their HIV status; 90% of all people with diagnosed HIV infection will receive sustained antiretroviral treatment; and 95% of all people receiving antiretroviral treatment will be virally suppressed). Community organizations and students celebrated the campaign through performances, dialogues, and information booths. Representatives from government agencies, international organizations, community-based organizations working with HIV patients, people living with HIV, and media agencies joined the public event. K=K is a global, community-driven movement based on four large-scale studies across five continents that prove that there is zero risk of transmitting HIV sexually when the HIV-positive partner is on effective treatment with an undetectable viral load. The extraordinary findings have mobilized the K=K movement in Vietnam to advocate for access to HIV services and to reduce HIV-related stigma and discrimination in men who have sex with men, transgender, and other key populations most affected by HIV in Vietnam. Ambassador Kritenbrink stated in his opening remarks, “K equals K is transformative. Once on effective treatment, people living with HIV no longer need to fear that they might transmit HIV to their sex partners, which has been a main pillar of stigma. They can now lead healthy, fulfilling, joyful lives without this heavy burden. Those who are HIV-negative do not need to fear sexual transmission through a positive partner who has an undetectable viral load. Successful HIV treatment and pre-exposure prophylaxis are the most effective ways to prevent HIV transmission, period.”

CDC in Vietnam, the Hanoi CDC, and partners—in a broad health collaboration across government, nongovernmental and community-based organizations, and academic sectors—are implementing this multi-pronged, municipal campaign to promote the K=K message. The Hanoi K=K Campaign is part of CDC and PEPFAR’s objective of community engagement through strengthening both public-private and academic-community partnerships to reduce HIV stigma and discrimination.

Successful uptake of K=K in Hanoi requires that the message and the science behind it are well understood by people living with HIV, key populations, and health care workers. Through a series of public events, a coordinated media and print campaign, and trainings for health care workers, the Hanoi campaign will highlight the unifying message of K=K for the public, the health care system, and the community.