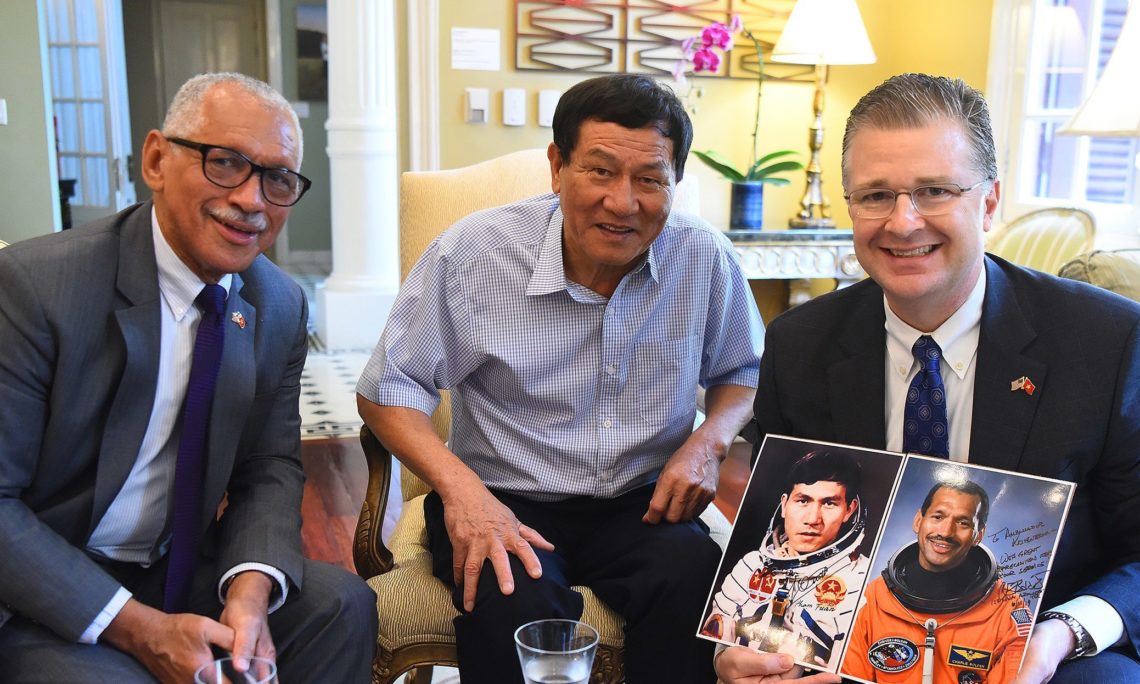 General Bolden said, “It is my great pleasure to be back here in Hanoi. I visited once as NASA Administrator, and I’m thrilled to return again, as a U.S. State Department Science Envoy for Space. I am here this week promoting space exploration and the commercialization of space, as well as international cooperation in science and technology.”

In a separate visit to Hoa Lac Hi Tech Park outside of Hanoi, General Bolden continued to promote career opportunities in space with a talk to high school students at VNSC’s new planetarium. While there, VNSC leaders gave General Bolden a tour of their observatory and the building next to the planetarium that will eventually house their space museum.

At the American Center Hanoi, General Bolden talked about space exploration to university students and young professionals who also had the opportunity to experience space through virtual reality.

In a special luncheon hosted by U.S. Ambassador Daniel J. Kritenbrink, General Bolden had the opportunity to meet Cosmonaut Phạm Tuân, the first Vietnamese citizen to travel to space. The two men share an extraordinary history, as both men served as pilots during the Vietnam War, explored space as astronauts, and became generals in their respective militaries.

General Bolden’s visit to Vietnam occurs during a yearlong commemoration of the 50th anniversary of the first Moon landing. United States Astronaut and Apollo 11 Commander, Neil Armstrong, became the first man to step on the Moon on July 21, 1969. Bolden highlighted this achievement during his keynote address at the U.S. Embassy’s Independence Day celebration, challenging the audience to continue that tradition of exploration and risk-taking but within the peaceful context of cooperation.

He stated, “We never sought ownership or conquest of space in our race to the moon. Nor do we seek it now. Instead, we seek strong, committed partners such as Vietnam whose space program, like ours, reflects the ambitions of a nation and a willingness to accept the risks of exploration that we Americans so admire.”

As U.S. Science Envoy for Space, Major General Charles Bolden, Jr., has been traveling the world on behalf of the U.S. Department of State to promote bilateral science and technology partnerships in space exploration with a special emphasis on commercial space opportunities.

General Bolden served as the 12th Administrator of NASA, where he oversaw the safe transition from 30 years of Space Shuttle missions to a new era of exploration focused on full utilization of the International Space Station and technology development. General Bolden’s 34-year career with the Marine Corps included 14 years as a member of NASA’s Astronaut Office during which he traveled to space four times aboard the Space Shuttle between 1986 and 1994, commanding two of the missions and piloting two others.

Major General Charles Frank Bolden, Jr. (USMC-Ret.) was nominated by President Barack Obama and confirmed by the U.S. Senate as the 12th Administrator of the National Aeronautics and Space Administration (NASA). He began his duties as head of the Agency on July 17, 2009, and retired from NASA on January 20, 2017.

At NASA, Bolden oversaw the safe transition from 30 years of Space Shuttle missions to a new era of exploration focused on full utilization of the International Space Station and space and aeronautics technology development. The Agency’s dynamic science activities under Bolden include an unprecedented landing on Mars with the Curiosity rover, launch of a spacecraft to Jupiter and continued progress toward the 2018 launch of the James Webb Space Telescope (JWST), the successor to the Hubble Space Telescope.

Born August 19, 1946, in Columbia, SC, Bolden graduated from C. A. Johnson High School in 1964 and received an appointment to the U.S. Naval Academy. He earned a Bachelor of Science degree in electrical science in 1968 and was commissioned as a second lieutenant in the Marine Corps. In 1977, he earned a Master of Science degree in systems management from the University of Southern California.

Bolden also had a long and distinguished military career. He flew over 100 combat missions during the Vietnam War. He later served as a test pilot for the Naval Air Test Center’s Systems Engineering and Strike Aircraft Test Directorates. After completing his service as an astronaut in 1994, he served as the Assistant Commandant of Midshipmen at the Naval Academy and in 1998 as the Commanding General of the Marine expeditionary force attached to Operation Desert Thunder in Kuwait. He last served as Commanding General of the 3rd Marine Aircraft Wing at Marine Corps Air Station Miramar, California, prior to his retirement from the Marine Corps.

Bolden’s 34-year career with the Marine Corps included 14 years as a member of NASA’s Astronaut Office. After joining the office in 1980, he traveled to orbit four times aboard the Space Shuttle between 1986 and 1994, commanding two of the missions and piloting two others. He retired from the Marine Corps in 2003.

Bolden’s past honors include the Defense Distinguished Service Medal, the Defense Superior Service Medal, the Distinguished Flying Cross, Air Medal, three NASA Exceptional Service Medals and four NASA Space Flight Medals. He received the National Space Trophy in 2014 and holds several Honorary Doctorate degrees from numerous institutions of higher education. He was inducted into the U.S. Astronaut Hall of Fame in May 2006 and enshrined into the National Aviation Hall of Fame in October 2017.

Today Bolden serves as the President and CEO of The Bolden Consulting Group LLC. He serves as an independent Director of the LORD Corporation and Atlas Air Worldwide Holdings. He also serves as a pro-bono Director of the Marine Corps Scholarship Foundation, the Naval Academy Foundation and the Alliance for Peacebuilding. He is a Regent of the Potomac Institute and a Trustee of the Bankinteer Innovation Foundation.