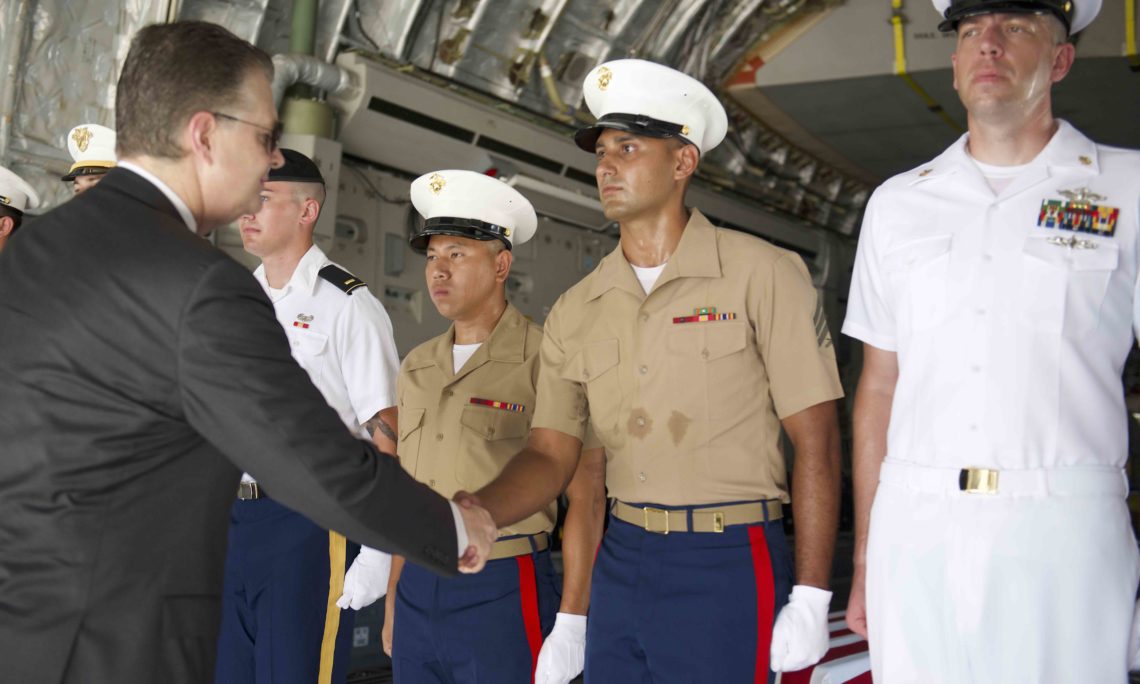 HANOI, June 25, 2019 – The U.S. Defense POW/MIA Accounting Agency (DPAA), in collaboration with the Vietnam Office for Seeking Missing Persons (VNOSMP), on June 23 conducted its 150th Repatriation Ceremony at Danang International Airport. During the ceremony, Vietnam officially transferred remains believed to be those of U.S. personnel missing from the Vietnam War.

A combined Recovery Team of military and civilian specialists from the United States and the Vietnam located these remains during the 135th Joint Field Activity, which took place in Vietnam from May 9th to June 23rd 2019. Prior to the repatriation ceremony, a team of U.S. and Vietnamese forensic scientists examined the remains and recommended that they be transported to DPAA’s laboratory in Hawaii for further testing.

Dignitaries from both countries, including U.S. Ambassador to Vietnam Daniel J. Kritenbrink and Vietnam’s Vice Foreign Minister Bui Thanh Son, oversaw yesterday’s ceremony. A military honor guard from DPAA then transferred the remains to a United States Air Force aircraft for repatriation back home to the United States upholding the U.S. promise that “none are forgotten.”

“Today, we remember the sacrifice of American personnel who went missing so many years ago as well as honor our shared mission to return them back home. This mission represents the seamless teamwork between Vietnamese and American officials and a long history of cooperation and support between our two governments. Also, it continues highlight a basis upon which normalization of relations was a quarter century ago,” said Ambassador Kritenbrink.

During this Joint Field Activity in Vietnam, over 130 dedicated Americans and their Vietnamese partners excavated sites in Quang Nam, Quang Ninh, Quang Binh, Thua Thien Hue, and Vinh Phuc provinces. The mission successfully recovered one set of remains to be further examined in DPAA’s Laboratory in Hawaii.

Since 1985, close cooperation between the U.S. and S.R.V. Governments on this humanitarian mission to provide the fullest possible accounting — through the Defense Prisoner of War/Missing in Action (POW/MIA) Accounting Agency and its predecessors in coordination with the Vietnam Office for Seeking Missing Persons has led to the accounting of 727 Americans in Vietnam. There are 1,246 Americans still unaccounted-for in Vietnam from the war.