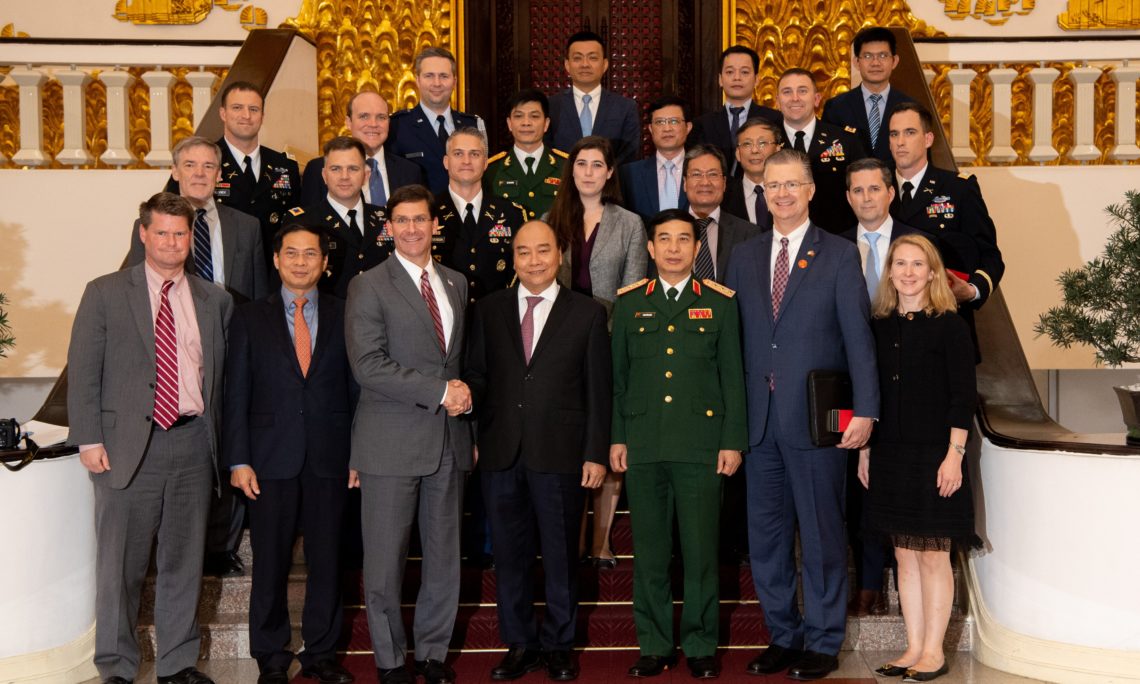 HANOI, November 21, 2019 – U.S. Secretary of Defense Mark T. Esper made his first official visit to Vietnam November 19-21, highlighting the importance of the U.S.-Vietnam defense partnership. Secretary Esper’s visit reaffirmed the U.S. commitment to our partnership with Vietnam and our enduring support for a free and open Indo-Pacific and a rules-based order in the South China Sea.

During his visit, Secretary Esper met with Vietnam’s Prime Minister Nguyễn Xuân Phúc, Defense Minister General Ngô Xuân Lịch, and the Executive Secretary of the Communist Party, Trần Quốc Vượng. In each of these meetings, Secretary Esper reaffirmed the U.S. support for a strong, prosperous, and independent Vietnam that contributes to international security and the rule of law. During the meeting with Minister Lich, the two leaders also exchanged artifacts from the war era. Secretary Esper showed the U.S. commitment to working with Vietnam to account for Vietnamese Missing in Action by presenting a map of a battlefield burial site provided by a U.S. Marine veteran from the conflict, while Minister Lich reaffirmed Vietnam’s commitment for U.S. accounting by presenting identification cards of several missing U.S. personnel.

In addition, Secretary Esper spoke to over 200 students, academics, and government officials at the Diplomatic Academy of Vietnam about the important defense partnership between the United States and Vietnam and our commitment to security in the Indo-Pacific region. During his speech, he emphasized the importance of the U.S.-Vietnam bilateral partnership, and how this partnership contributes to peace and stability in the Indo-Pacific region. Secretary Esper stated, “Our aim is for all people to live in prosperity, security, and liberty; for all nations to be free to conduct trade and to exercise their sovereignty; and for the seas and waterways upon which our economies depend, to be open to all.” He also stated, “The United States firmly opposes intimidation by any claimant to assert its territorial or maritime claims, and we call for an end to the bullying and unlawful activities that are negatively impacting ASEAN coastal states. This sort of behavior stands in stark contrast to the United States’ vision of a free and open Indo-Pacific, in which all nations, big and small, can prosper side-by-side in peace and stability.” Secretary Esper further added, “China’s unilateral efforts to assert illegitimate maritime claims threaten other nations’ access to vital natural resources, undermine the stability of regional energy markets, and increase the risk of conflict.”

The Secretary Esper also announced the United States will transfer a second Hamilton-class High Endurance Cutter to Vietnam. The delivery of the vessel– one of the largest class ships in the U.S. Coast Guard’s fleet– is a symbol of the comprehensive partnership between the United States and Vietnam and will increase Vietnam’s maritime law enforcement and search and rescue capabilities. Secretary Esper emphasized, “We are committed to expanding this strategic partnership by increasing cooperation in areas of common interest such as maritime security, peacekeeping operations, humanitarian assistance, and disaster relief. This includes providing Vietnam the capabilities it needs to protect its sovereignty and natural resources so it can continue to thrive.”