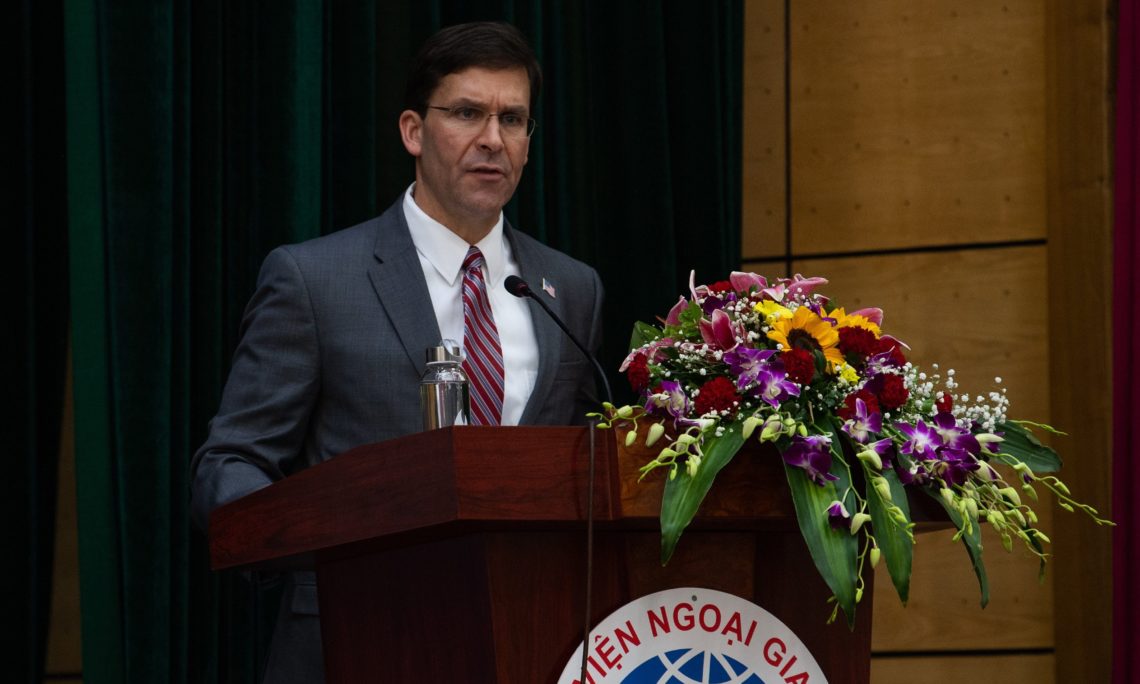 Good afternoon! I want to thank President Nguyễn Vũ Tùng and the Diplomatic Academy of Vietnam for hosting me today. The Academy has long been one of the most prestigious institutions in the country and has trained generations of Vietnam’s leaders. It is an honor to be here, and I am pleased to talk to you today about the United States’ vision for the Indo-Pacific.

Over the past week, I’ve traveled to the Republic of Korea, Thailand, the Philippines, and now Vietnam. I’ve spent time with our ASEAN partners discussing threats to stability in Southeast Asia. And I took part in the ‘ASEAN Defense Ministers Meeting Plus’ dialogue. In just about every conversation I had, there was one theme that consistently emerged: the international rules-based order that has enabled the security and prosperity of Indo-Pacific nations for decades is now under duress. As a result, the sovereignty of proud and independent Indo-Pacific nations is being threatened.

The geopolitical situation today brings to mind a story written by the Athenian historian Thucydides over two millennia ago during the Peloponnesian War. In the summer of 416 BC, the great naval power Athens sailed a force to the independent island of Melos to demand its citizens surrender and pay tribute to Athens or face certain destruction. The commissioners of Melos cited their neutrality in the ongoing war between Athens and Sparta, arguing that “right” was on their side.
Unconvinced, the Athenians desired to waste no time discussing the morality of the situation. As they saw it, debating the merits of their aggression was only relevant between rivals of equal power. In this case, Melos was the smaller state, and according to Athenian logic had no choice but to submit to avoid annihilation. In a line that best summarized their worldview, the Athenians justified their actions, stating, “the strong do what they can, and the weak suffer what they must.”

The Melian Dialogue, as this story is known, is often used in academic institutions such as this as a case study in realpolitik. Thucydides’ narrative offers us an insightful look into a “might makes right” version of international relations. Today, most of the world would consider this approach antiquated and contrary to the principles we expect responsible nations to abide by. This type of behavior runs counter to the system we have collectively built and benefited from for the past 70 years. However, Southeast Asian nations are increasingly being subjected to coercion and intimidation in ways that challenge the fundamental underpinnings of the free and open, rules-based order.

What we are currently witnessing in the South China Sea is a prime example of this behavior. The long period of peace, which enabled the economic rise of nearly every Asian nation, is yielding to a renewed style of Chinese conduct that infringes on the sovereign rights of other states. We have witnessed this behavior most recently in Malaysia, the Philippines, and here in Vietnam with the harassment of the country’s long-standing oil and gas activities around Vanguard Bank inside its Exclusive Economic Zone. Combined with reclamation and militarization of disputed outposts in the South China Sea, China’s unilateral efforts to assert illegitimate maritime claims threaten other nations’ access to vital natural resources, undermine the stability of regional energy markets, and increase the risk of conflict.

These coercive activities are imposing economic costs on Southeast Asian states by blocking their access to an estimated $2.5 trillion in unexploited hydrocarbon resources. In some cases, ASEAN countries have been compelled to work through extortionary joint ventures to extract resources that are rightfully theirs under international law. The United States firmly opposes intimidation by any claimant to assert its territorial or maritime claims, and we call for an end to the bullying and unlawful activities that are negatively impacting ASEAN coastal states.

This sort of behavior stands in stark contrast to the United States’ vision of a free and open Indo-Pacific, in which all nations, big and small, can prosper side-by-side in peace and stability. Our vision is based on cooperation and principles that are enduring, inclusive, and shared across the region. These principles include: respect for sovereignty and independence of all nations; peaceful resolution of disputes; free, fair, and reciprocal trade and investment, which includes protections for intellectual property; and adherence to international rules and norms, including freedom of navigation and overflight.

Our aim is for all people to live in prosperity, security, and liberty; for all nations to be free to conduct trade and to exercise their sovereignty; and for the seas and waterways upon which our economies depend, to be open to all.

I remind my friends here in Hanoi, although the west coast of America lies several thousand miles away, we are connected by the Pacific Ocean, strong economic linkages, and Vietnamese-American familial ties. The United States is an Indo-Pacific nation. We have enduring strategic and economic interests in the region, and a related commitment to its continued stability and prosperity. Working closely with allies and partners like Vietnam, we will compete vigorously to promote our vision, and counter attempts to limit autonomy and freedom of choice.

It is important to note that our inclusive vision extends to all nations, including China. We will continue to pursue a constructive, results-oriented relationship with Beijing and seek areas for cooperation and common ground for the benefit of our nations. However, the United States will not shy away from calling out and resisting coercive behavior when we see it. By standing together to oppose challenges to our security and prosperity, we can demonstrate our shared resolve and deter conflict before it occurs. This is why strengthening our alliances and growing new partnerships is a critical component of the United States’ National Defense Strategy.

Our growing relationship with Vietnam provides one such example. We are committed to expanding this strategic partnership by increasing cooperation in areas of common interest such as maritime security, peacekeeping operations, humanitarian assistance, and disaster relief. This includes providing Vietnam the capabilities it needs to protect its sovereignty and natural resources so it can continue to thrive. In that respect, I am happy to announce that the United States will provide the Vietnam Coast Guard a second high-endurance cutter next year. This ship represents another concrete symbol of our strengthening relationship.

Not only does this cooperation enhance the security of Vietnam and the broader region, but it also builds trust and mutual respect, which creates harmony between our people. It is important to note that this would not be possible without a solid foundation of close cooperation on legacy of war and humanitarian issues. These include U.S. efforts to clean-up dioxin contamination and to remove unexploded ordnance, along with Vietnam’s strong support for U.S. personnel accounting activities. The Department of Defense will continue to advance these efforts so we can honor our fallen and those missing in action, as we build a positive future together.

More broadly, the Department of Defense is taking steps to promote a networked security architecture across the region that will uphold a rules-based order founded on international law. Doing so will deter aggression, and provide all nations with the opportunity to prosper. We believe that ASEAN is the centerpiece of this effort, as I highlighted during the ‘ASEAN Defense Ministers Meeting Plus’ discussion in Bangkok two days ago. In fact, our strategy aligns with ASEAN’s Indo-Pacific Outlook, which emphasizes ASEAN centrality and its leadership in promoting regional cooperation.

The United States and ASEAN share common values, and we will work closely together to promote the principles enshrined in its Indo-Pacific Strategy. We look forward to Vietnam’s chairmanship of ASEAN next year, which provides an opportunity to build regional consensus to address common challenges to sovereignty, particularly in the South China Sea.

Across the Indo-Pacific, the United States will continue to put our words into action. Earlier this year, we held the first-ever ASEAN-U.S. maritime exercise, where we trained with partner nations to enhance our collective ability to provide maritime security. We will continue to support efforts by our allies and partners, particularly Vietnam, to ensure freedom of navigation and economic opportunity throughout the region.

We will also maintain a routine military presence in the South China Sea, to demonstrate the seriousness of our commitment. We will not accept attempts to assert unlawful maritime claims at the expense of law-abiding nations. The United States military will continue to fly, sail, and operate wherever international law allows, and we will encourage other nations to affirm their rights in the same manner. Freedom of Navigation Operations remain central to our demonstration of leadership in upholding the rules-based order.

In closing, the United States will remain fully engaged in the Indo-Pacific. We must continue to work together to sustain a free and open environment based on principles that support the rights of all nations, big and small. However, as Vietnam has experienced first-hand, this vision based on cooperation, trust, and respect is regrettably not shared by all. Coercion, aggression, and intimidation – the tools of statecraft best left in a previous era – remain alive and well today. But, as the Trung sisters showed the Han Dynasty nearly 2,000 years ago, Vietnam is a nation that – like the United States – will never accept a “might makes right” approach to international relations.

Together, we can stand against this behavior. United in our efforts, we can enforce the norms of responsible international conduct. Steadfast in our partnership, we can ensure that a free and open order prevails.

The United States’ resolve to uphold this environment is deep-rooted and has only grown stronger in the face of efforts to undermine it. By joining with allies and partners to defend the principles and values that made the Indo-Pacific region thrive, we will ensure that peace, prosperity, and security live on for generations to come.

Thank you and I look forward to our discussion.