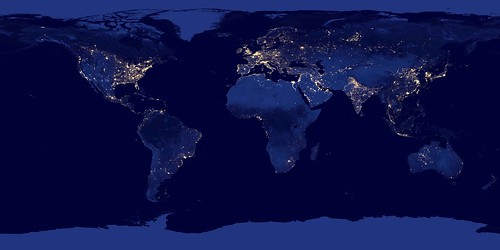 Earth at night, 2012. People around the world depends upon electric lighting. Generating electricity using increased amounts of non-fossil fuels is critical to slowing climate change…This image of the Earth at night is a composite assembled from data acquired by the Suomi National Polar-orbiting Partnership (Suomi NPP) satellite over nine days in April 2012 and thirteen days in October 2012. It took 312 orbits and 2.5 terabytes of data to get a clear shot of every parcel of Earth’s land surface and islands. Credit: NASA Earth Observatory image by Robert Simmon..The nighttime view of Earth in visible light was made possible by the “day-night band” of the Visible Infrared Imaging Radiometer Suite. VIIRS detects light in a range of wavelengths from green to near-infrared and uses filtering techniques to observe dim signals such as gas flares, auroras, wildfires, city lights, and reflected moonlight. In this case, auroras, fires, and other stray light have been removed to emphasize the city lights…Named for satellite meteorology pioneer Verner Suomi, NPP flies over any given point on Earth’s surface twice each day at roughly 1:30 a.m. and 1:30 p.m. The spacecraft flies 824 kilometers (512 miles) above the surface in a polar orbit, circling the planet about 14 times a day. Suomi NPP sends its data once per orbit to a ground station in Svalbard, Norway, and continuously to local direct broadcast users distributed around the world. The mission is managed by NASA with operational support from NOAA and its Joint Polar Satellite System, which manages the satellite’s ground system…NASA Earth Observatory image by Robert Simmon, using Suomi NPP VIIRS data provided courtesy of Chris Elvidge (NOAA National Geophysical Data Center). Suomi NPP is the result of a partnership between NASA, NOAA, and the Department of Defense. Caption by Mike Carlowicz…Instrument: Suomi NPP – VIIRS ..Credit: NASA Earth Observatory..Click here to view all of the Earth at Night 2012 images ..Click here to read more about this image …NASA image use policy...NASA Goddard Space Flight Center enables NASA’s mission through four scientific endeavors: Earth Science, Heliophysics, Solar System Exploration, and Astrophysics. Goddard plays a leading role in NASA’s accomplishments by contributing compelling scientific knowledge to advance the Agency’s mission…Follow us on Twitter..Like us on Facebook..Find us on Instagram