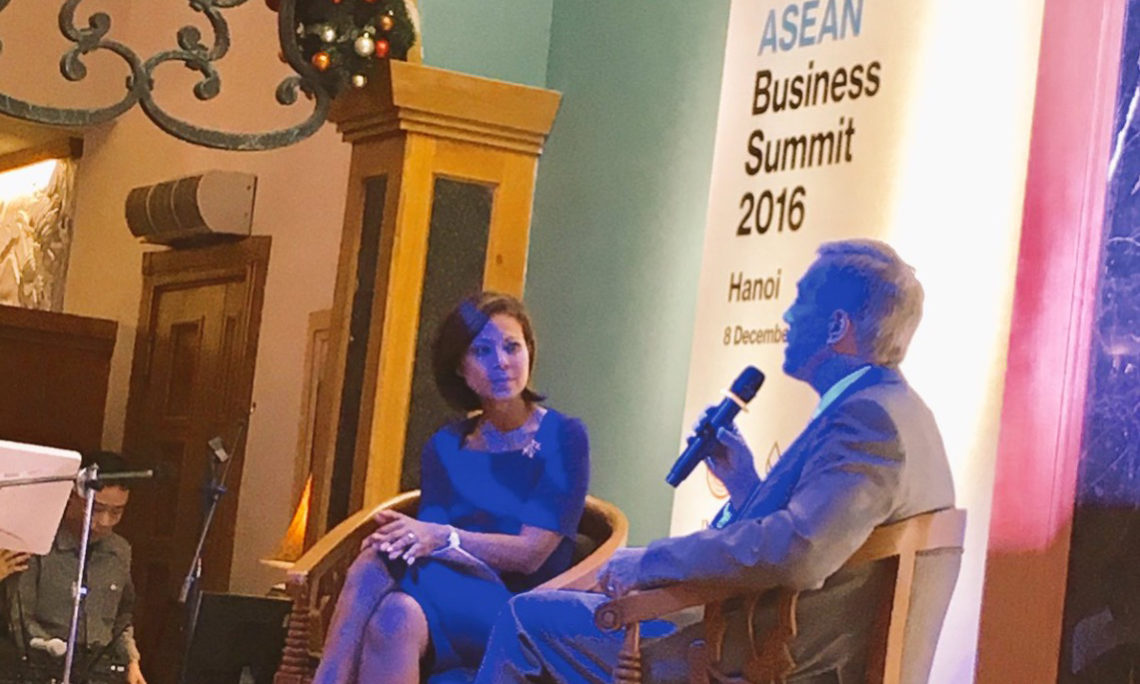 <Vietnamese>
Good evening and welcome to everyone.  I am really looking forward to our discussion here.

Thank you, Ms. Amin, for that very kind introduction.  And thank you to Bloomberg for inviting me to join all of you here tonight.  Bloomberg is doing some outstanding work bringing together leaders from Vietnam, the United States, and around the region to share ideas and build connections that complement so many of our diplomatic efforts.  I’m really looking forward to our discussion.

First, a little background.  Just over one year ago the United States and Vietnam celebrated the 20th anniversary of diplomatic relations.  And since then, we’ve seen U.S.-Vietnam relations grow deeper and stronger than they’ve ever been.

In May, President Obama joined President Tran Dai Quang in issuing a joint statement in which they laid out a broad plan to define the partnership between our countries.  We set some ambitious goals: from improving security cooperation to protecting freedom of religion and expression, to tackling global challenges like climate change and illegal wildlife trafficking.

That joint statement was an important demonstration of our mutual commitment to invest in a peaceful and prosperous shared future.

And of course both sides have paid special attention to negotiating the Trans-Pacific Partnership agreement – the TPP.  I expect this group will have a lot of interest in this subject.  But first, I should say how impressed I am with the progress Vietnam has made towards implementing the TPP commitments.

We’ve seen Vietnam rise quickly in the “ease of doing business” rankings  by moving to reform its system of State Owned Enterprises and streamlining customs efficiency.

They have also improved protections for intellectual property and the environment.  And perhaps most significantly, they’ve taken strides toward allowing Vietnamese labor to organize.  This is an important first step toward leveling the global playing field.

This progress has already paid dividends.  U.S. businesses are coming to regard Vietnam as an increasingly reliable partner, and bilateral trade is up 15%.

That’s no small accomplishment, and it hasn’t gone unnoticed by Vietnamese policymakers, who are coming to see market reforms as an increasingly necessary element of their strategy for long-term growth.

Now, I have to admit that the U.S. presidential election has generated more than a little uncertainty, particularly regarding trade.

It’s still too early to speak to specifics of the incoming administration’s policy priorities.  But I can say this:  irrespective of politics, the interests of the United States in Vietnam remain unchanged.  And I stand by the assertion that American interests align closely with Vietnam’s.

It remains in our mutual interest to protect intellectual property rights.

It remains in our mutual interest to see Vietnamese laborers enjoy the right to organize.

And it remains in our mutual interest to promote trade between our countries.

We depend on each other, and it will remain my priority to ensure that connections between the United States and Vietnam continue to grow.   And the good news is our Vietnamese partners share our goals, so the prospects for our growing partnership are bright, and that’s not likely to change.

With that, I’ll hand it back to Ms. Amin; I’m looking forward to our discussion and hearing what questions you might have.

<Vietnamese>
Thank you and have a good evening.