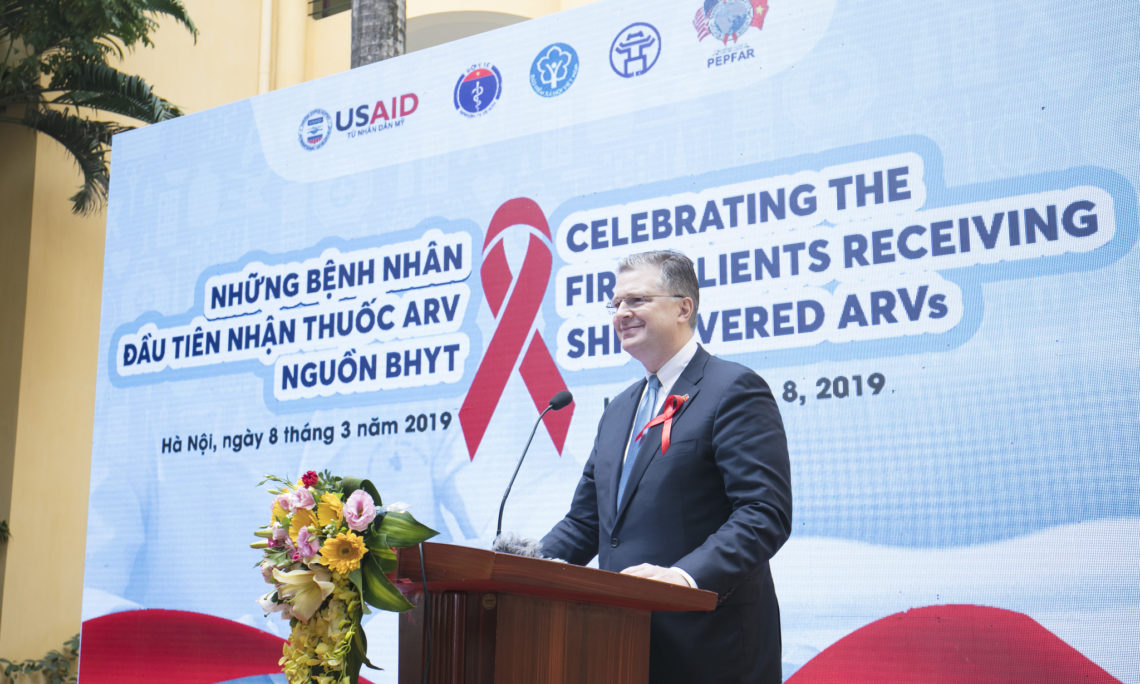 It is my distinct honor to be here with you this morning as we celebrate the first patients in Vietnam to receive HIV treatment medications through Vietnam’s social health insurance.

For nearly two decades, the United States has partnered with Vietnam in its fight against HIV. When the United States Government launched the President’s Emergency Plan for AIDS Relief (or PEPFAR) in 2003, Vietnam was the first country in Asia to receive support. And since then, Vietnam has taken bold measures to implement an innovative and successful HIV response, supporting life-saving antiretroviral treatment for more than 130,000 people in Vietnam. And in the last three years, the number of people on HIV treatment has increased by more than 50 percent.

Six years ago, Vietnam committed to reducing dependence on donor resources for controlling the HIV epidemic. The Government of Vietnam is doing what few other governments in the world have been able to do. Namely, you have taken responsibility for financing HIV prevention and treatment services through the national social health insurance system or SHI.

As we all know, antiretroviral drugs changed the course of the HIV/AIDS epidemic. AIDS was once a disease that killed people; now, with daily antiretroviral treatment – AIDS is a chronic condition. If people living with HIV take antiretroviral drugs daily, it allows them to live healthy and productive lives and stops the transmission of HIV to others.

Vietnam’s social health insurance makes this lifelong availability and adherence to HIV treatment possible. That’s why today’s event is so crucial. Tens of thousands of HIV patients will now have access to locally sustainable treatment. The United States Government applauds Vietnam’s leadership in controlling its HIV epidemic by marking this historic juncture.

So today, together, we proudly take a step forward in realizing Vietnam’s vision of transitioning HIV treatment to SHI.

In 2015, Vietnam was the first country in Southeast Asia to commit to the UNAIDS “90-90-90” epidemic control targets. Under these targets, 90% of people living with HIV will know their HIV status, 90% of those who know their status will be on treatment, and 90% of those on treatment will achieve HIV viral suppression. Now, SHI has procured ARVs that will cover 48,000 HIV patients this first year and scale up to provide ARVs for all HIV patients in Vietnam in the next few years. So again to our partners in Vietnam, it’s your leadership and your dedication to ensuring sustainable HIV care for the people of Vietnam that defines a model from which other PEPFAR programs across the globe will learn and benefit. All of us on the U.S. side – from PEPFAR, USAID, and colleagues across the entire U.S. Government – we are honored to partner with you and we are honored to celebrate with you your achievements today.

Congratulations and thank you very much.