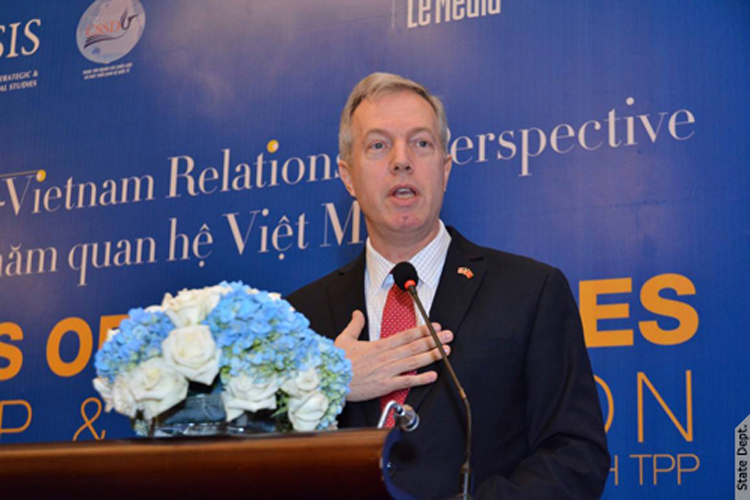 CSIS’s reputation is well-known, and I am pleased to see old friends Murray Hiebert, Wendy Cutler and Evan Medeiros. It bodes well for the future when the best minds of the U.S. and Vietnam can convene in an atmosphere of such creativity and candor to discuss how to deepen the relationship even further.

Vietnam has a special place in my heart. That’s no secret to anyone. But I would like to tell you why. When I first came to this country in 1996 I was a young diplomat, sent to begin what President Clinton then called “a time to heal and a time to build.” I served in Hanoi and here in Ho Chi Minh City, and many images remain vivid in my memory. What I remember most clearly are the young people I got to know, and who now I call friends. I remember how optimistic they were about the future of their country, and how much they yearned for the United States to return to Vietnam—this time as a partner. It became clear how important it was for the United States to create a future with Vietnam – to start a new journey – one that would see these young people enjoy all the opportunities they needed to pursue their goals – education, economic or otherwise. Because I knew that if they could pursue their dreams, then Vietnam would benefit. And if Vietnam became a strong and prosperous country, then the United States would benefit.

So, I saw the potential, but I also saw the challenges, and I knew that there was nothing inevitable about succeeding in this new journey. We had little economic trade to speak of – less than $500 million a year. Our people-to-people ties had been cut off, and our governments knew little of each other, so forging trust was incredibly difficult. But, because of the patience, persistence and courage of many in both our governments, our relationship steadily improved, and in the past few years, it has transformed.

The United States is now Vietnam’s number one export destination, and we enjoy nearly $40 billion in two-way trade. Our scientists are working side-by-side on global health and climate change, and our militaries are working together on peacekeeping, maritime security and disaster response. In 2015, nearly 19,000 Vietnamese students attended school in the United States, the most among ASEAN countries. Later today you will hear from Dam Bich Thuy, a leader in establishing Fulbright University Vietnam here in Ho Chi Minh City. FUV is our top priority in the field of education, and is a great example of the type of project we envisioned 20 years ago when we reestablished relations. I can’t think of a better symbol of how far we can go than a Vietnamese university built on an American model that will shape future Vietnamese leaders for generations to come.

But nothing demonstrates the relationship’s transformation better than two events that happened in 2015 – the historic visit of General Secretary Nguyen Phu Trong to Washington, and the conclusion of negotiations for the Trans Pacific Partnership. General Secretary Nguyen Phu Trong’s meeting with President Obama showed the respect our two countries have for each other. TPP, if fully implemented, will radically accelerate the bilateral relationship, but just as importantly, will serve as a game changer for the broader economic and strategic landscape in East and Southeast Asia.

So, twenty years after I first served here, I tell everyone I meet that today’s Vietnam is transformed. But one thing that has not changed is Vietnam’s young people. This country, the majority of whom were born after 1975, is filled with optimistic, intelligent, dynamic, and relentlessly hard working young people. I meet them every day, here in Ho Chi Minh City, and around the country. They came of age during Vietnam’s integration into the world community, they tell me about the opportunities and prosperity their parents never had, and they ask me to pursue even deeper ties between our two countries. I hear these dreams, and every day I ask my team to figure out how to get us there.

Thanks to the last twenty years, we have an excellent foundation on which to build. Our economic interests are increasingly intertwined, and TPP will only strengthen those bonds. Because our countries have reconciled, our people can reconcile, and here in Ho Chi Minh City, we see ever greater numbers of Americans coming to establish businesses. And our strategic interests are converging as well– with both countries seeking to champion and defend an international order based on the rule of law and the peaceful resolution of territorial disputes, and that applies the same rules to all countries, no matter how big or small.

But, as was the case 20 years ago, nothing is inevitable. And while I am an optimist, I must also address the challenges that– if not managed and resolved– can hinder and even derail our common hopes.

The United States has reached a new normal in its relationships with Southeast Asia, and our Rebalance foreign policy is bearing fruit. But we know that we must remain committed and focused, and continue to make concrete contributions to the region’s pursuit of prosperity and peace. That’s why the President has worked so hard to engage the region on climate change, pandemic disease, and education. It’s also why he consistently speaks out on the security challenges of the region – terrorism and other nontraditional security threats – but also the territorial sovereignty disputes in the South China Sea – or “Bien Dong” as it’s called in Vietnam that – if not handled peacefully and according to international law – will undermine confidence and threaten stability. It’s also why the United States is committed to ensuring that basic human rights are respected around the world. It is because we want Vietnam to succeed that we seek to engage on these issues, because our peoples agree that the protection of fundamental rights such as free speech, assembly, and press are pre-conditions for achieving long-term and economic prosperity and political security.

Both of our Constitutions guarantee these human rights, and I am proud of how we have shown that we can talk about complicated issues in a way that seeks common ground in a spirit of mutual respect. It is in this spirit that I offer a serious concern. As we know, TPP has the potential to dramatically improve Vietnam’s economy. It’s also a powerful symbol of the success of Vietnam’s international integration process. However, I fear that continued reports of harassment and detentions of peaceful human rights advocates could place Vietnam in very real jeopardy of losing TPP, and all that it symbolizes. My sincere wish is that Vietnam’s leaders recognize what is at stake. The world is watching Vietnam. The U.S. Congress is watching Vietnam, too. And many of its members have made it clear that they will weigh this country’s human rights record when they vote on whether to include Vietnam in TPP. I say this as a friend of Vietnam. Vietnam should not lose its place among TPP member countries because this country’s leaders decided it was more important to harass and arrest peaceful human rights advocates.

Now, I recognize that our countries come from different historical, cultural and socioeconomic contexts. And when I express concern about arrests or harassment of human rights and labor activists I do so with a measure of humility, knowing that the United States also faces challenges. But throughout the last 20 years, it has been clear to me that Americans and Vietnamese alike believe in the same fundamental principles of equality, freedom and justice. So we must continue on this path, because if we can demonstrate progress on human rights, we can reach the full potential of this partnership.

It’s a partnership, that – I believe twenty years from now – will see the young people of our two nations innovate together and spearhead new businesses and investment opportunities. They will freely exchange ideas that will help them improve their businesses, their communities, and their governments. They will serve side-by-side in our armed forces on peacekeeping missions, and will work together to respond to humanitarian crises and natural disasters. They will find cures to diseases and solutions to the threats of climate change, and they will become leaders in government guaranteeing a rules-based order that protects sovereignty and peace – and not give into the false choice of one or the other.

The U.S. goal for the bilateral relationship is clear and consistent: We support a strong, prosperous, and independent Vietnam that promotes the rule of law and human rights, and we are committed to working with the people and the Government of Vietnam to do what it takes to get us there.