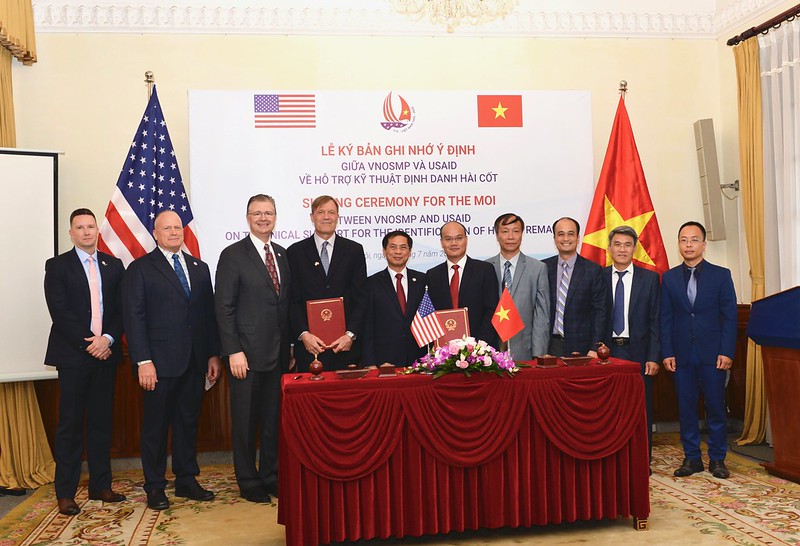 HANOI, July 9, 2020 — Yesterday, the United States Agency for International Development (USAID) and the Vietnam Office for Seeking Missing Persons (VNOSMP) signed a Memorandum of Intent (MOI) to support DNA analysis of unidentified human remains recovered from the U.S.-Vietnam war. Under this agreement, USAID will provide Vietnam with the best, cutting edge technology for DNA extraction and analysis, work with Vietnam to increase the effectiveness and efficiency of their laboratories, and ultimately increase the number of remains that can be accurately reunited with their families. The signing ceremony was attended by U.S. Ambassador to Vietnam Daniel J. Kritenbrink, USAID/Vietnam Mission Director Michael Greene, USAID/Vietnam Deputy Mission Director Craig Hart, Vietnam’s First Vice Minister of Foreign Affairs Bùi Thanh Sơn, and VNOSMP Director Lê Chí Dũng.

Under this MOI, USAID will partner with VNOSMP to fund a new three to five year, $2.4 million project, which will complement a broader U.S. Department of Defense effort to support Vietnam’s efforts to find and identify the more than 200,000 Vietnamese combatants missing in action (VMIA). The United States intends to institutionalize VMIA cooperation along six lines of effort, of which USAID’s contribution will be to support improving DNA analysis capacity.

Speaking at the ceremony, Ambassador Kritenbrink said: “The United States appreciates all the support that Vietnam has provided over the last 35 years in accounting for missing U.S. service members, and is committed to supporting the people of Vietnam as they seek to identify and ultimately reunite remains of combatants with their loving families.”

Since 1989, the United States and Vietnamese Governments have worked together to overcome the effects of the war with programs that remediate dioxin contamination, support persons with disabilities, and remove unexploded ordnance. In addition to these activities, the search, recovery, and identification of human remains from the war is vitally important both spiritually and culturally for both countries.