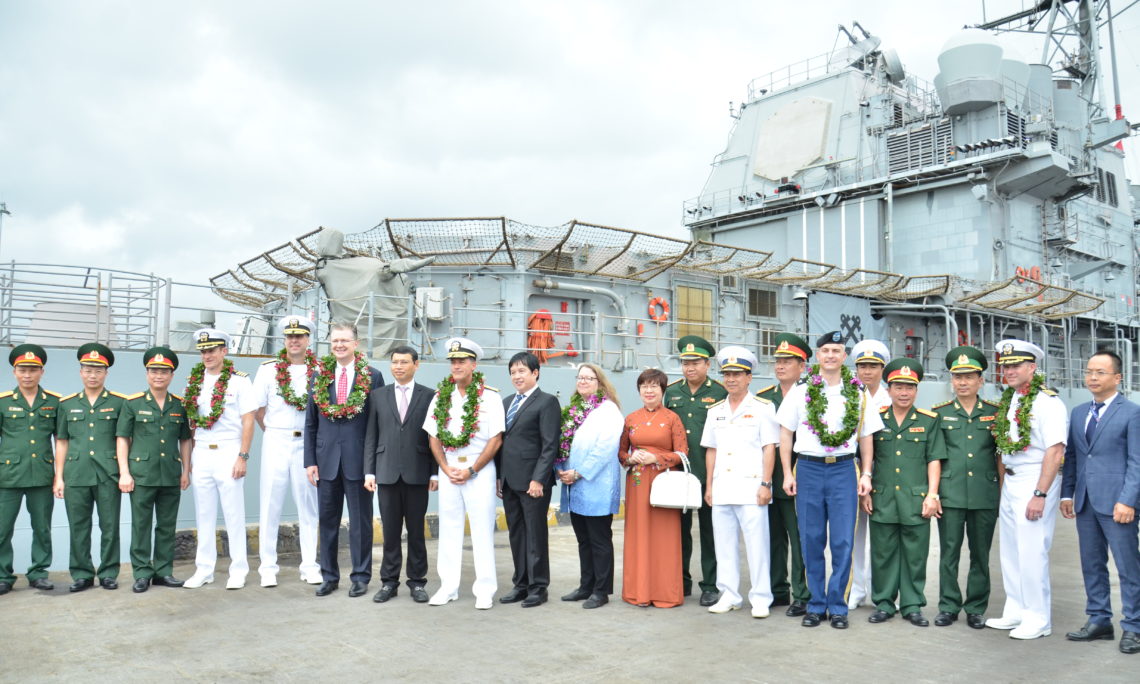 “We are honored to receive such a wonderful and warm welcome from the people of Vietnam,” said Adm. Aquilino in a March 6 telephone briefing with journalists.  “This port call highlights our continued cooperation and strong support for Vietnam…Our commitment to each other, including this week’s visit, will help ensure a stable, predictable, and durable relationship based on mutual interests, values, and trust.”

“Through hard work, mutual respect, and continuing to address the past while we work toward a better future, the United States and Vietnam have grown a partnership grounded in trust and mutual respect,” added Ambassador Kritenbrink in the same phone briefing.  “This, of course, is the second time a U.S. Carrier Strike Group has visited Vietnam.  Visits like these not only strengthen the United States’ partnership with Vietnam, but they also continue to ensure peace and stability and freedom of commerce across the region.  This visit is just one more step forward in strengthening our friendship and partnership with Vietnam, and I could not be more optimistic about our shared future together.”

During the visit, sailors from both ships participated in cultural exchanges and community service projects including making crafts, playing sports, a language exchange, gardening, and painting at Da Nang’s Vocational Charity Center, the Center of the Charity and Child Protection Association, the Agent Orange Victims Center, Hoa Mai Orphanage, and Dong A University, demonstrating the importance of people-to-people ties between the United States and Vietnam.  A professional exchange taking place during the visit focused on cooperating on infectious disease prevention.  Adm. Aquilino and Ambassador Kritenbrink also addressed business leaders at a lunch hosted by the Ho Chi Minh City Chapter of the American Chamber of Commerce.

“Our relationship with Vietnam is also built on strong people-to-people ties and it relies on our ability to engage one-on-one in professional and humanitarian activities,” stated Ambassador Kritenbrink in the March 6 phone briefing.  “This ship visit offers the opportunity for Americans and Vietnamese to share skills related to, for example, the control of infectious disease and language capabilities, to enjoy concerts and sporting events together, and to engage in community activities throughout Da Nang.”

The visit also offered an opportunity for a number of Vietnamese American sailors in the Theodore Roosevelt Strike Group to visit Vietnam.  “I haven’t been back to Vietnam in over 20 years.  I look forward to reconnecting with my culture and enjoying Vietnamese food,” said Tho Nguyen, Chief Electrician’s Mate aboard the USS Bunker Hill.