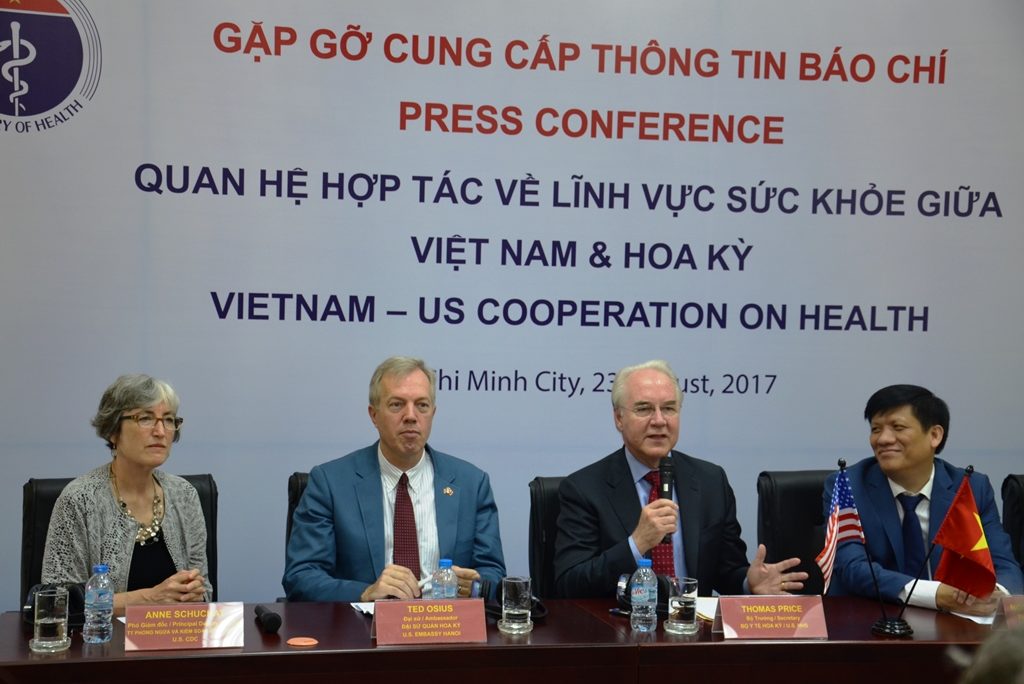 Ho Chi Minh City, Vietnam, August 23, 2017 — Vietnam Ministry of Health and United States Department of Health and Human Services inaugurated the Southern Vietnam Public Health Emergency Operations Center (EOC) at the Pasteur Institute Ho Chi Minh City (HCMC) on August 23. The EOC will serve as the regional coordination hub for rapid response in the event of a disease outbreak or other public health emergency affecting any of the twenty provinces of southern Vietnam.

When not activated for an emergency, the EOC team will continuously analyze disease surveillance data, conduct outbreak investigations, and strengthen public health coordination systems. The EOC reflects the deep collaboration between the U.S. Department of Health and Human Services (HHS) and the Ministry of Health of Vietnam to improve disease surveillance and the control of communicable diseases.

At the inauguration, the Minister of Health, Dr. Nguyen Thi Kim Tien, the Vice Minister of Health, Dr. Nguyen Thanh Long and the Director of the Pasteur Institute HCMC, Dr. Phan Trong Lan, were joined by the U.S. Secretary of Health and Human Services, Dr. Thomas Price, the U.S. Ambassador to Vietnam, Mr. Ted Osius, and the U.S. Centers for Disease Control and Prevention’s Principal Deputy Director, Dr. Anne Schuchat.

“We are excited to open the new EOC, which will be an important component of preventing and controlling outbreaks in southern Vietnam,” said HHS Secretary Price. “Through the expertise and talents of HHS scientists, physicians, and researchers, the United States is working with other nations around the world to increase their capabilities to prevent, detect, and respond to infectious diseases that know no borders. This collaboration between the United States and Vietnam will further the partnership between our two nations and strengthen global health security.”

Ambassador Osius echoed this sentiment, highlighting that “the United States and Vietnam have numerous strategic reasons – national security, diplomacy, trade – to remain engaged in health collaboration. This administration is committed to maintaining this close relationship, which is vitally important to the U.S. and the broader global community.”

Vietnam has played a leadership role in the Global Health Security Agenda, which is a worldwide effort by over 60 countries to enhance capabilities to prevent, detect, and respond to health threats. Dr. Schuchat of the CDC praised the proactive approach taken by the country, explaining that “Vietnam has been a strong and early partner in global health security efforts, participating in CDC programs and building on earlier successes to advance the goals of the Global Health Security Agenda. CDC is committed to working with Vietnam and the Pasteur Institute to build the systems and capacities to tackle global pandemic threats.”

The Pasteur Institute HCMC plays an important role in global health security, which makes it an appropriate host for the EOC. The U.S. Government, through HHS and the Defense Threat Reduction Agency (DTRA) of the Department of Defense, are supporting equipment, information management systems, and training of personnel in EOC operations for Vietnam. The CDC has also supported the creation of community level surveillance for outbreaks, which was successful during the pilot phase. “This EOC helps to detect hazards early, mitigate risks, and prevent the local and global spread of potential threats,” said the Director of the Pasteur Institute HCMC, Dr. Phan Trong Lan. Two more EOCs are planned in the central part of the country in early 2018.

Response efforts are further strengthened by the Pasteur Institute staff participation in the Ministry of Health’s two-year Field Epidemiology Training Program in which CDC and partner staff collaborate to provide applied epidemiology training to strengthen local response to public health events. Additionally, CDC provides support for influenza surveillance and efforts to reduce influenza transmission through collaboration with the national influenza center at the Pasteur Institute HCMC. With CDC global health security funding and technical assistance, the Pasteur Institute supports hospital surveillance for severe acute respiratory infection (SARI), piloting of event-based surveillance in two southern provinces, An Giang and Ba Ria Vung Tau, along with the existing surveillance of severe viral pneumonia (SVP) in 20 southern provinces, and initial testing for Dengue, Zika, and Chikungunya viruses. The EOC will enhance these systems and help coordinate efforts to control outbreaks of communicable diseases.

CDC and the Pasteur Institute HCMC have partnered to address public health concerns for over 15 years. Through the President’s Emergency Plan for AIDS Relief (PEPFAR), the Pasteur Institute of HCMC was the first laboratory to support routine viral load testing and its surveillance work has been instrumental in understanding the changing HIV epidemic. The inauguration of this new EOC further strengthen ties between the United States and Vietnam and re-affirms the shared goals to prevent, detect, monitor, and respond to public health concerns.